xxxxxIn 1654 the French mathematician and physicist Blaise Pascal underwent a mystical conversion and spent the last eight years of his life in the Jansenist monastery of Port Royal near Versailles. It was here, believing that human life was predetermined, that he wrote his two major works, The Provincial Letters of 1656 and Thoughts on Religion. The first took the Jesuits to task for their moral laxity, the second defended Christianity, stressing the need for an inner conviction described as “God felt in the heart”. Today, however, Pascal is best remembered for his invention of the first calculating machine, and his pioneer work in mathematics and science, notably in projective geometry and the field of hydraulics. He also helped to formulate the theory of probability, and experimented with atmospheric pressures. He met René Descartes as a young man and this greatly influenced the nature of his future studies. 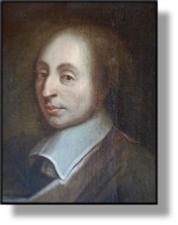 xxxxxIt was in 1654, after suffering a long period of deep depression, that the Frenchman Blaise Pascal, a brilliant mathematician and physicist, underwent a mystical conversion during a "night of fire" - as he later described it. As a result of this experience, he abandoned the material world and spent the last eight years of his life in the Jansenist monastery of Port Royal near Versailles. Here, devoting his time to contemplation and writing, he earned his place as one of the most outstanding mystical writers in Christian literature. A convert to Jansenism - the belief that all human life is predetermined, with many souls damned and but a few gaining eternal life -, it was here at Port Royal that he wrote his two major works, the Provincial Letters and Thoughts on Religion (Pensées).

xxxxxPascal arrived at Port Royal at a time when the Jansenists were once more under serious attack. The Jesuits, firm believers in man's free will, were particularly hostile towards them, and the French government, fearing them to be Calvinists in disguise and enemies of the state, were wary of their true intentions. The leading Jansenist at that time was the theologian Antoine Arnauld. He had carried on a campaign against the Jesuits for some years and, because of his views, was expelled from the Sorbonne in 1656 and put on trial before the university's faculty of theology. This action provoked Pascal to write a series of 18 letters in Arnauld's defence in 1656. Known as the Provincial Letters, they took the Jesuits to task for their moral laxity, arguing that their ethical code lacked the vital spiritual dimension, and thus fell far short of the uncompromising demands of divine law. These literary epistles, some terse and caustic in tone, others indignant or conciliatory, were masterpieces of clear, precise prose. They proved extremely popular and doubtless did long-term harm to the reputation of the Society of Jesus - eventually suppressed by pope Clement XIV in 1773.

xxxxxHis Thoughts, published posthumously in 1670, was a work in defence of the Christian religion, made up of his inner meditations on human suffering and the power of divine faith. It contained what has come to be known as "Pascal's wager”. If God exists, then one loses everything by not believing; it therefore pays to believe whether God exists or not! Furthermore, although the probability of gaining eternal happiness via faith was small, it was nonetheless far greater than by any other means of human behaviour or belief. Any philosophy that claimed to explain away the nature of God and humanity was but an exercise in pride. Reason alone was totally insufficient. What was required was faith, and an inner revelation which might be described as "God felt in the heart". This written attempt to set the reader on the path to the Christian faith was made the more compelling by the eloquence of its prose.

xxxxxBut significant though these writings have proved to be, for most people Pascal is probably best remembered for his invention of the first calculating machine (illustrated). In order to help his father - who was a judge in a tax court - in 1642 he constructed a machine that could carry out the functions of adding and subtracting. About 70 of these calculators were eventually manufactured, and at least seven are still in existence. It is known that one was presented to Queen Christina of Sweden in 1625, and that another is held in the Conservatoire des Arts et Métiers in Paris. There is also a copy of one in the Science Museum in London. In fact, however, it is in the field of mathematics and physics that Pascal made his greatest contribution to man's material progress.

xxxxxHe was born in Clermont-Ferrand, a city in central France, in 1623, and was already showing an extraordinary ability in mathematics before his family moved to Paris six years later. Here he met the French mathematician René Descartes, and began his research in earnest. Whilst still in his teens he expounded one of the basic theorems of projective geometry (known as Pascal's Theorem). Somextime later, together with his friend, the French lawyer and amateur mathematician Pierre de Fermat (1601-1665), he formulated the theory of probability as related to games of chance. He also produced some pioneer work in the development of hydraulics, establishing the principle of the hydraulic press and jack in what came to be known as Pascal's Law: namely that pressure applied to an enclosed fluid is transmitted equally in all directions. And, on a like subject, he confirmed the theory put forward by the Italian physicist Evangelista Torricelli, that the level of a mercury column in a barometer is determined not by a vacuum, as previously believed, but by the surrounding atmospheric pressure. (To prove his point he got his brother-in-law to take a barometer up the Puy-de-Dôme in central France!) This paved the way for the use of the mercury barometer in forecasting changes in weather conditions. And he also played a part in the introduction of the first horse-drawn omnibus service in Paris. It seems this proved very popular until it was decided to charge a fare!

xxxxxIncidentally, in the 1970s a computer language was named PASCAL in honour of the 17th century scientist who constructed the first mechanical calculator! His prototype of 1642 was improved upon by the German mathematician Gottfried Leibniz thirty years later. 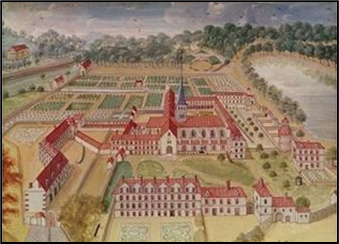 xxxxxAs we have seen, it was the publication of the book Augustinus in 1640 (C1), the work of the Flemish Roman Catholic theologian Cornelius Jansen, that gave birth to the movement known as Jansenism. In this book he argued that human beings, in order to carry out God's commands, required God's grace. As only God could give this grace, it followed that the destiny of all humans was predetermined.

xxxxxThis doctrine of "absolute predestination" was strongly opposed by the influential Jesuits - firm believers in human free will - and they persuaded the pope, Urban VIII, to ban Augustinus by a bull of 1642. Likewise the French government feared that this movement, based at the convent of Port Royal near Versailles (illustrated), might well harbour subversive elements. As such, it posed a danger to the state. In 1653, therefore, because of the increasing interest shown in the movement, its members were declared heretics, and three years later its leader, Antoine Arnauld, was expelled from the Society of the Sorbonne and forced into hiding.

xxxxxIt was at this point that the philosopher Blaise Pascal came to Arnauld’s defence, upholding the tenets of Jansenism, and launching a scathing attack upon the Jesuits in his Provincial Letters. They played a major part in the movement's subsequent survival. 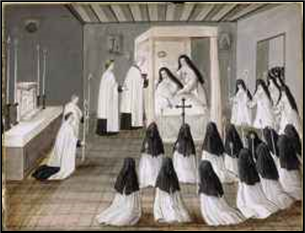 xxxxxIn 1669 a compromise was reached with Pope Clement IX, and there followed a period of calm known as the "Peace of the Church". However, when Clement died ten years later the attack upon the Jansenists was renewed. Finally, Louis XIV stepped in and closed down the convent of Port Royal in 1709 and, over the next three years, destroyed most of its buildings. Thenxin 1713 pope Clement XI, pressed by Louis XIV, issued his papal bull Unigenitus, condemning outright a treatise by the then leader of the Jansenists, the French theologian Pasquier Quesnel (1634-1719).

xxxxxBut despite these actions, the movement continued to have a strong appeal, especially among the French parish clergy, and it also gained adherents in other European countries, notably in Spain and Italy. It began to decline in importance towards the end of the 18th century, but not before its members had witnessed with great satisfaction the downfall of their antagonists the Jesuits, expelled from France in 1764, and suppressed by Pope Clement XIV in 1773 "in order to obtain peace within the Church". (But the Society was re-established in 1814 to continue its work in education and the missionary field).

xxxxxAs we have seen, the publication of Augustinus in 1640 (C1), the work of Cornelius Jansen, gave birth to Jansenism, with its belief in predestination. Such was its following that in 1653 the government declared its members heretics and, three years later, expelled its leader, Antoine Arnauld, from the Sorbonne. It was then that Pascal came to his defence with his Provincial Letters. A compromise was reached in 1669, but finally Louis XIV stepped in and closed down Port Royal in 1709. The movement continued, but began to decline in the late 18th century, surviving long enough, however, for its members to witness the pope’s suppression of their rivals, the Jesuits, in 1773. 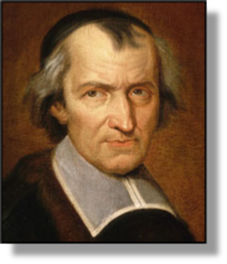 xxxxxAs we have seen, the French theologian and philosopher Antoine Arnauld (1612-1694) was the leading exponent of Jansenism. Born in Paris and trained in law and theology at the Sorbonne, he was ordained a priest in 1641 and made a member of the Society of the Sorbonne in 1643. It was in that year that he produced his On Frequent Communion, a work which clearly set out the aims and ideals of Jansenism. This incurred the wrath of the Jesuits, and matters were then made worse in 1655 by his publication of his Moral Theology of the Jesuits, a treatise which denounced the Jesuits for their “relaxed morals”. Blaise Pascal came to his defence in his Provincial Letters in 1656, but in that year he was expelled from the Sorbonne and had to go into hiding, spending some time at Port Royal. Hexreturned to public life during the so-called peace of Pope Clement IX, - when, together with the French theologian Pierre Nicole (1625-1695), he wrote a scathing attack upon the Calvinist Protestants - but attacks on him were resumed in the mid-1670s, and in 1679 he was forced into exile, first in the Netherlands and then in Belgium. 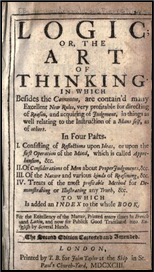 xxxxxAs a philosopher he was, like René Descartes, a firm rationalist. In his major work of 1662, The Art of Thinking - often known as the Port-Royal Logic and written together with Nicole - he argued that the main aim of logic was to inculcate clear thinking so that truth could be distinguished from error. He saw precision of thought as being “essential to every aspect and walk of life”. In his later years, as we have seen, he was engaged in a long and sometimes acrimonious dispute with the philosopher Nicolas Malebranche. In his treatise Concerning True and False Ideas, produced in 1883, he objected to his fellow-countryman’s so-called Vision of God and his Treatise on Nature and Grace, and criticised the relationship he made between theology and metaphysics.

xxxxxArnauld was a prolific writer. His writings, which included works on mathematics, amounted to 37 volumes. Among his acquaintances was Gottfried Leibniz whom he met in Paris in the early 1670s. He corresponded with him over a number of years, mainly on the subject of the German philosopher’s Discourse on Metaphysics.

xxxxxAs we have seen, the French theologian and philosopher Antoine Arnauld (1612-1694) was the leading exponent of Jansenism. In 1643 he set out the aims and ideals of the movement in his On Frequent Communion, and in 1655 launched an attack upon the Jesuits in his Moral Theology of the Jesuits. This work forced him into hiding for some twenty years, and he eventually took refuge in Belgium in 1679. There he conducted a dispute with his fellow countryman and philosopher Nicolas Malebranche, attacking his theory of grace in his treatise of 1883 entitled Concerning True and False Ideas.