xxxxxThe Society of Friends, a Puritan movement, was founded by the travelling preacher George Fox in the late 1640s. In 1650 its members acquired the name “The Quakers” after Fox instructed that they should “quake at the word of the Lord”. The movement held that every person possessed an “inner light” by which to perceive the word of God, so there was no need for trained clergy or an authoritarian church. Conduct was based on toleration, care for the needy, and a belief in the essential goodness of human nature. The movement spread rapidly on the continent and in the American colonies, and Quakers became pioneers in social reform, like Elizabeth Fry and the industrialist George Cadbury. 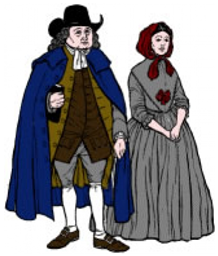 xxxxxThe Society of Friends, a Puritan movement sometimes known as the Children of Light, was founded by the English travelling preacher and missionary George Fox in the late 1640s. Its members acquired their popular name "The Quakers" in 1650 when, so we are told, Fox instructed his followers to "quake at the word of the Lord". Apart from its considerable religious impact, the movement also went on to produce a number of outstanding social pioneers, including the prison reformer Elizabeth Fry, and the enlightened industrialist George Cadbury.

xxxxxThe fundamental belief of its members is that every person possesses an "inner light" by which they may perceive the word of God. Living strictly according to the word of Christ, they emphasise truth and sincerity and follow a simple life-style. This individual approach to religion means that Quakers reject any formal creed, and see no need for trained clergy or an organised, authoritarian church. Nonetheless, meetings are held regularly in order to help members feel God's presence and guiding spirit, and a code of conduct is laid down based on toleration, care for the needy, and faith in the essential goodness of human nature. 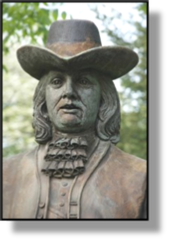 xxxxxDespite being ridiculed for their sombre attitude to life, and persecuted for their unorthodox Christian views, membership rapidly increased, and the movement spread to the continent and North America in the 1660s. Here, as in England, the Friends became pioneers in social reform. In the American colonies the largest areas of settlement were in Rhode Island, North Carolina, western New Jersey and the colony of Pennsylvania, founded by the Quaker William Penn (illustrated) in 1682 (C2). In the 19th century divisions emerged within the movement - particularly in the United States - but the fundamental tenets of the Society remained largely intact.

xxxxxThexdoctrine of the "inner or inward light" was ably expounded in 1678 by the Scottish Quaker Robert Barclay (1648-1690) in his work An Apology for the True Christian Divinity, as the Same is Held Forth and Preached by the People Called in Scorn Quakers. 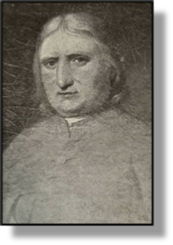 xxxxxThe movement's founder, George Fox (1624-1691), was born at Drayton-in-the-Clay (now Fenny Drayton), Leicestershire, the son of a Puritan weaver. It would seem that he had no formal education, and worked for a time as an apprentice cobbler. He left home at the age of eighteen and, after experiencing a series of spiritual revelations which he called "openings", came to believe in a personal, mystical "inner light" as the means of receiving God's guidance and inspiration.

xxxxxA man of enormous self-confidence and magnetism, he became a travelling preacher in 1647 and quickly gained converts, first in the north and then over much of the country. He was imprisoned on numerous occasions for his unconventional views, and it was while being held at Derby in 1650, charged with blasphemy, that he and his fellow members were first called "Quakers" as a term of abuse. That he should attract the opposition of the established church is hardly surprising. One of his expressed views, for example, was that ministers "bred at Oxford and Cambridge" were in no way qualified to be spiritual leaders within the Anglican Church!

xxxxxFrom 1666 he devoted most of his time to expanding the work of the movement. He visited the West Indies and North America in 1671 in order to extend the Quaker communities, and later travelled to parts of northern Europe. He spent the last fifteen years of his life in and around London. He wrote a number of controversial pamphlets on social as well as religious matters, and in 1675 began writing a detailed diary of his life. This formed the basis of his Journal, edited and published in 1694 under the supervision of his friend and admirer William Penn. 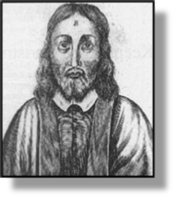 xxxxxIncidentally, a prominent Quaker at this time was James Naylor (1616-1660) of Ardsley in Yorkshire. He joined the movement after meeting Fox in 1651 but, on going to London, fell under the influence of a number of over-zealous Quaker women. They persuaded him that he was a reincarnation of Christ. In October 1656, therefore, he entered Bristol on a donkey in imitation of Christ's entry into Jerusalem and was promptly arrested. Cromwell, being a friend of Fox, attempted to save him from imprisonment, but failed to do so. He was sentenced to a long term in prison but, after admitting his mistake in a letter to Parliament, was released in 1659 and continued to preach in London until his death the following year. ……

xxxxx…… Part of his punishment included the branding of his forehead with the letter “B” for blasphemer, as shown in the illustration.

xxxxxAfter experiencing a series of spiritual revelations, the founder of the Quakers, George Fox (1624-1691), came to believe in a personal, mystical “inner light” as the vehicle for God’s guidance. A man of enormous magnetism, he became a travelling preacher in 1647 and quickly gained converts. Arguing that there was no need of church or ordained ministers, he was imprisoned a number of times, and it was while held at Derby in 1650 that the term Quakers was first used. He travelled widely from 1666, visiting the West Indies, North America and parts of Europe, but he spent the last fifteen years of his life in London. His Journal was published in 1694 with the help of his friend and admirer William Penn.