The Prince of Condé

xxxxxThe spiralling taxes and serious food shortages caused by the Thirty Years’ War, plus discontent over the rule of an Austrian queen regent and her Italian minister Mazarin, led to widespread street rioting in Paris. Fearing that the revolt - known as the Parlementary Fronde of 1648 (C1) - might spread to the provinces, the regent made concessions and granted an amnesty. In 1650, however, a second rebellion broke out. This time it included dissident nobles bent on overthrowing Mazarin and the Crown’s grip on the country. This Princely Fronde, as it was called, was led by the Prince of Condé, and when he was imprisoned the rebellion spread across the country. The following year Condé was released and Mazarin was dismissed, but serious divisions now broke out among the Frondeurs. The ambitious Condé, facing arrest, marched an army into Paris in 1652, but two months later was defeated by a royalist force. Seizing the initiative the regent and the young king Louis XIV then entered the capital in triumph, Mazarin was reinstated in 1653, and the power of the Crown was not only restored but also reinforced. The next serious challenge to the monarch would not be until the Revolution of 1789 (G3b).

xxxxxFollowing the devastation and disruption caused by the Thirty Years’ War there was much discontent throughout France. Spiralling taxes and serious food shortages caused widespread misery. Furthermore, following the death of Louis XIII in 1643, there was growing opposition to the "foreign" rule of the queen regent (Louis XIVs mother Anne of Austria) and her Italian-born chief minister Cardinal Mazarin. Matters came to a head in the Spring of 1648 when the Parlement of Paris refused to approve further tax increases and followed this up by issuing 27 articles demanding reform. Mazarin was at first conciliatory, but in August, when the threat from Spain had diminished, he took a harder line and arrested two of the parlementary ring leaders. 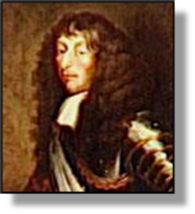 xxxxxAs we have seen, this action sparked off the first revolt - often referred to as the Parlementary Fronde - in 1648 (C1). There was widespread street rioting in Paris - the Days of the Barricades - and the city was placed under siege by the royal army under the Prince of Condé (1621-1686) (illustrated). Early in 1649, however, with the rumbling of revolt in the provinces, the regent considered it wise to make concessions. By the Peace of Rueil in April an amnesty was granted to the rebels and their major demands were met. 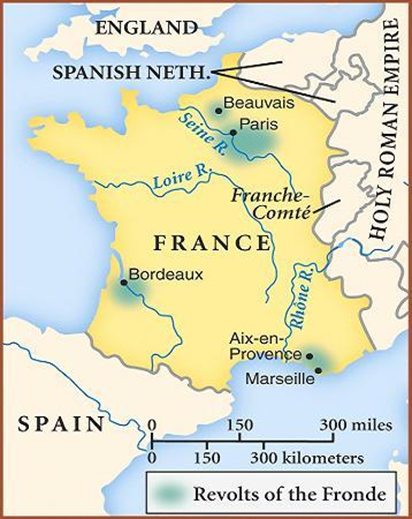 xxxxxBut the first revolt was no sooner over than the second civil war - the Princely Fronde - broke out, this time supported by dissident nobles anxious to overthrow Mazarin and the Crown's stifling grasp on all aspects of government. The immediate cause of the revolt centred around Prince Condé, the military commander who, as we have seen, played a prominent part in the Thirty Years’ War. Thwarted in his quest for political power, he turned rebel himself, and his imprisonment in January 1650 sparked off widespread rebellion in the provinces. The government held its own throughout the year, but early in 1651 the nobles were joined by former rebels from the Old Fronde and this turned the tide in favour of the revolt. Condé was released and Mazarin was dismissed and exiled abroad.

xxxxxBut the triumph of the Frondeurs was short lived. There were serious divisions within their ranks caused, not least, by a great deal of suspicion over the ambitions of Condé, now once again at large. Astutely aware of these divisions, the regent, Anne of Austria, joined the Old Fronde and ordered the arrest of Condé in August 1651. Further conflict was now inevitable. Condé took up arms and entered Paris in April 1652, but two months later his forces were badly mauled by royal troops just outside the city, and, losing the support of parlement and the notables of Paris, he fled to the Spanish Netherlands. (He was later pardoned and became commander of the French army in 1675!) The young king, Louis XIV, and his mother entered Paris in triumph at the beginning of June, and Mazarin was reinstated in February 1653. It was a significant victory for the forces of the Crown.

xxxxxIt need not have ended in this way. Had the insurrection - a powerful and widespread revolt - been better led and better co-ordinated, then French history, indeed, European history, might well have taken a different turn. As it was, the failure of the nobility and parlement to provide a viable challenge to royal power - torn apart as they both were by intrigue and self-interest - left the way clear for the absolutism of Louis XIV's reign and the supremacy of the French monarchy for decades ahead. Indeed, the Fronde, that series of rebellions over the years 1648 to 1653, proved to be the last serious challenge to French royal authority until the Revolution of 1789 (G3b). On assuming power in 1661 Louis XIV, highly suspicious of the nobility, made quite sure that all aspects of government remained firmly in his own hands. 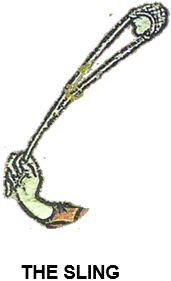 xxxxxIncidentally, when Louis XIV took control of his realm in 1661 his mother, Anne of Austria, retired to a convent. Interest in her life was renewed in the nineteenth century when the French writer Alexandre Dumas made her his central character in his novel The Three Musketeers, published in 1844. ....... 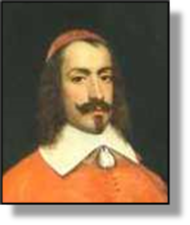 xxxxx…… Cardinalxde Retz (1613-1679), an able and ambitious French churchman, played an important part throughout The Fronde (“The Sling”) and, like many of his fellow aristocrats, was quite willing to change sides when it helped his advancement. His Mémoires, written in retirement and covering his life up to 1655, provide an interesting account of the five year struggle, and are regarded as a classic in French literature.