xxxxxThe Anglo-Dutch war of 1652, and those that followed, were mainly due to fierce commercial rivalry. In response to England’s Navigation Acts of 1651, restricting Dutch trade with British possessions, a Dutch fleet launched a surprise attack upon an English naval force off Dover. The attack was repelled and the following month England declared war on the Republic. The Dutch then won a resounding victory off Dungeness, but from then on proved no match for the English fleet. They were roundly defeated off Texel in the summer of 1653, and by the Treaty of Westminster the following year were obliged to accept the Navigation Acts. However, as we shall see (1664 C2), further conflict was to break out in 1665.

xxxxxThe Anglo-Dutch war which began in 1652, like those that followed in the reign of Charles II, were mainly the result of keen commercial rivalry between the two maritime nations. Alarmed at England's introduction of the Navigation Acts of 1651 - which aimed at restricting Dutch trade with British possessions - the Dutch went on the offensive. InxMay of 1652 their fleet, under the command of their distinguished admiral Maarten Tromp, launched a surprise attack upon an English naval force off Dover in the English Channel. But the Dutch were defeated and the following month England declared war on t 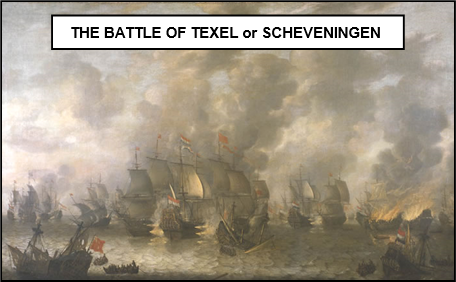 xxxxxTowardsxthe end of the year Tromp won a resounding victory off Dungeness, but from then on the Dutch fought at a disadvantage against the larger and better equipped English ships. Thexend of the war came in the summer of 1653 when, in a ferocious battle off Texel (Ter Heijde near Scheveningen), the Dutch were roundly defeated. Trompxwas killed in the engagement and the Dutch, by the terms of the Treaty of Westminster (April 1654), were obliged to recognise England's Navigation Acts. But as we shall see (1664 C2), the battle between these two naval powers for sea r

outes and distant markets was far from over, and conflict broke out again in 1665.

xxxxxIncidentally, the story goes that after his victory at Dungeness, Admiral Tromp sailed up the English Channel with a broom at his masthead to remind his enemy that he had swept them from the high seas! 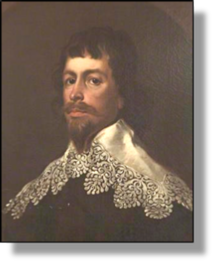 xxxxxRobert Blake (1599-1657), the commander of the Commonwealth navy, was one of the most outstanding soldiers and seamen in English history. He was born at Bridgwater, Somerset, the son of a successful merchant, and, after studying at Oxford, was elected to the Short Parliament in 1640. When the civil war broke out he joined the Parliamentary cause and, during this conflict, distinguished himself by his brilliant defensive tactics, first at Lyme in Devon, and then at Taunton in Somerset. Appointed one of three "generals at sea" in 1649, he was responsible for the defeat of the small Royalist fleet commanded by Prince Rupert. He pursued the squadron into the Mediterranean and destroyed it off Cartagena, Spain, in November 1650. 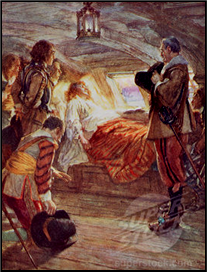 xxxxxWhen war broke out with the Dutch in 1652, he took command of the fleet in the English Channel. Following his defeat off Dungeness, he won three major engagements against the Dutch admiral Maarten Tromp, thus helping to bring about the surrender of the Dutch Republic at the Treaty of Westminster in 1654. His last major battle at sea was fought against the Spanish in April 1657. He totally destroyed a Spanish treasure fleet off Tenerife in the Canary Islands, but died of old wounds as his victorious fleet approached Plymouth Sound in the first week of August (illustrated).

xxxxxBlake was given a full state funeral and buried in Westminster Abbey in the presence of Oliver Cromwell. However, after the restoration of the monarchy, his body was exhumed and dumped in a common grave in St. Margaret’s churchyard, outside the Abbey. Lord Nelson considered him one of England’s greatest naval commanders.

xxxxxThe commander of the Commonwealth navy, Robert Blake (1599-1657) fought for Parliament in the Civil War, and in 1649 was appointed one of the three “generals at sea”. He defeated a Royalist fleet commanded by Prince Rupert in 1650 and then, following his defeat by a Dutch fleet off Dungeness, he forced the Dutch to make peace by winning three major engagements against them. In April 1657 he destroyed a Spanish treasure fleet off Tenerife, but died of old wounds as his ship approached Plymouth.