xxxxxThe English biographer Izaak Walton is best known for his The Compleat Angler, a book on the art of fishing, published in 1653. It paints an idyllic picture of an innocent outdoor pursuit, centred around a delightful character named Piscator. He also wrote a number of short biographies, one on the theologian Richard Hooker, but these are not remembered today. The poet John Donne was a close friend and fishing companion. When he died, Walton wrote an Elegy to accompany his volume of poems and later, in 1640, wrote his biography, The Life of Dr.John Donne. 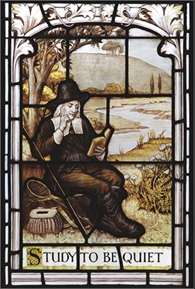 xxxxxThe English biographer Izaak Walton - the writer of that popular work The Compleat Angler - was born in Stafford, and started his working life as an apprentice to a London ironmonger. He soon acquired a shop of his own, and this provided him with a modest but comfortable living. Although his schooling had been elementary, he read widely and gained a circle of learned acquaintances. Among these was the poet John Donne, then vicar of the nearby church of St. Dunstan. He became a close friend and fishing companion, and when he died in 1631, Walton wrote an Elegy to accompany his volume of poems, published in 1633. Later, in 1640, he wrote a biography of his friend, The Life of Dr. John Donne, produced alongside a collection of Donne's sermons.

xxxxxWalton then went on to write a number of short biographies, notably those of the Elizabethan theologian Richard Hooker (1665), and the English poet George Herbert (1670), another of his fishing companions. These might be seen as first attempts at professional biographies. They were somewhat lightweight in content, not always factually accurate and, as in the style of Plutarch - whom he had studied well - tended to exaggerate the strengths and play down the weaknesses of his subjects' characters. Had Walton's reputation rested solely on these works his name would not have become a household word! 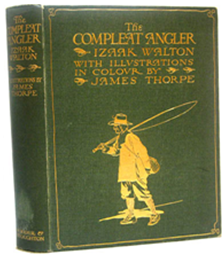 xxxxxFortunately for Walton it did not. His fame, of course, rests fairly and squarely upon his treatise on the art of fishing entitled The Compleat Angler, published in 1653. That this work should become a minor classic - and non 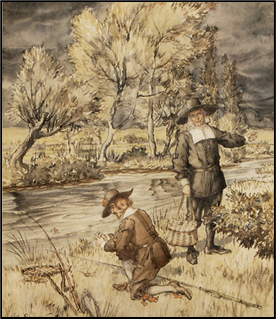 e would have been more dumbfounded than its author - is not really surprising. Written with enthusiasm and in an attractive dialogue style, it paints an idyllic picture of an innocent outdoor pursuit. Its central character, one Piscator, is a quiet, thoughtful man who, apart from fishing, delights in friendship and the simple things of life. It is little wonder that the sub-title of this work should be The Contemplative Man's Recreation. Walton enlarged and improved his treatise four times. Atxthe final revision in 1676 he added a section on fly-fishing, written by his friend Charles Cotton (1630-1687), a poet whose verse was later admired by Wordsworth, Coleridge and Charles Lamb.

xxxxxA staunch royalist, Walton spent the Civil War in Stafford and, on returning to the south, found a friend in George Morley, the Bishop of Winchester. He took up residence in the bishop's palace and spent the remainder of his days there, writing, reading and, of course, fishing.

xxxxxIncidentally, in a letter to Samuel Coleridge, Charles Lamb wrote that The Compleat Angler “breathes the very spirit of innocence, purity and simplicity of heart”.