xxxxxIt was while studying in Paris in the 1650s that the French dramatist Jean Baptiste Racine acquired a love for poetry and the theatre. He gave up his studies for the priesthood in 1663, and was soon mixing with the great dramatists Molière and Corneille - though not always on the friendliest of terms. His major works were produced in the 1660s and 1670s and included Andromaque of 1667, Britannicus, Bérénice, Bajazet, Mithridate, Iphigénie and Phèdre. These were powerful tragedies, written in verse, based on classical themes, and structured in accordance with the “three unities” of time, action and place. In 1677, however, he turned away from secular plays and produced two biblical dramas Esther and Athalie. Throughout his career, Racine was popular at court. Some of his works were performed before Louis XIV, and he was elected to the French Academy in 1672. Despite the restrictions on his work, he was the master of classical French tragedy. Admired for the lyricism of his poetry, the simplicity of his style, and the realistic portrayal of his characters and plots, he is regarded as one of the world’s greatest playwrights. 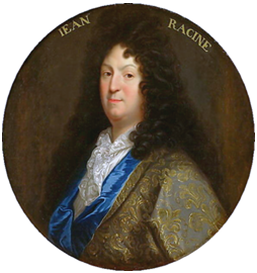 xxxxxThe greatest exponent of French classical drama, Jean Baptiste Racine, was born in La Ferte-Milon, near Paris. The son of a minor tax official, he was orphaned by the age of three and came under the care of his paternal grandmother. He attended the Jansenist Convent at Port Royal and the Collège d'Harcourt in Paris, receiving an education which stressed a belief in high moral standards, and provided a commanding knowledge of the Greek and Latin classics. It was while studying in Paris that he met and became friendly with a number of literary figures, including the future fabulist Jean de La Fontaine. And it was at this time, too, that he gained recognition in court circles by dedicating a marriage ode entitled La Nymphe de la Seine to Louis XIV.

xxxxxHe began to study for the priesthood in 1661, but his stay in Paris had awakened in him a love of poetry and the theatre. He returned to the capital in 1663, and was soon mixing on equal terms with the great dramatists of the day, Molière and Corneille. Indeed, his first two plays, La Thébaïde, (The Thebaid) of 1664, and Alexandre le Grand (Alexander the Great) of 1665, were both produced at the Palais-Royal by members of Molière's company. However, Racine felt that Alexandre le grand had been poorly performed, and this upset Molière. He refused to deal further with Racine, so from 1666 onwards all his plays were produced by the Comédiens du Roy, a rival company based at the Hôtel de Bourgogne. At the same time he severed all connections with the Jansenists - who regarded novelists and playwrights as "public poisoners" - and concentrated on writing for the stage. 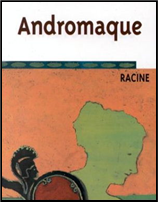 xxxxxWith the exception of Les Plaideurs (The Suitors), a satirical comedy of 1668, all of Racine's plays were tragedies, written in rhymed Alexandrine verse, and centred around the heroes and heroines of antiquity as recorded in Greek and Roman literature. As classical dramas they had to be structured strictly in accordance with the "three unities" in order that they could be easily understood. These were the unity of time (the action of the play could not exceed 24 hours); the unity of action (there could only be one plot); and the unity of place (events were to take place in a single location). Such restrictions have exposed his works to criticism on the grounds that they lacked lustre and spontaneity. Nevertheless, these intense dramas of human passion, accurately portrayed, remain firmly in the repertoire of the Comédie Française, the French national theatre.

xxxxxLike Molière, his major works were produced in the 1660s and 1670s. They included Andromaque (1667), Britannicus, Bérénice, Bajazet, Mithridate, and Iphigénie. All met with success, but his tendency to steal themes and upstage rival performances - not uncommon in those days - made him professional enemies, including the long established dramatist Pierre Corneille. In 1677, his great tragedy Phèdre, an adaptation of Hippolytus by the Greek dramatist Euripides, was first seen as something of a failure, proving less popular than a production of the same name put on by his rivals in order to steal his thunder. A few months later he turned away from what he called his sinful life. He stopped producing secular drama, became reconciled with Port Royal, and, under the influence of the Marquise de Maintenon (the king's second wife and an ardent convert to Roman Catholicism) wrote Esther and Athalie, two biblical dramas for private performance.

xxxxxThroughout his career, Racine found favour at court. A number of his works were performed before Louis XIV in Paris and at Versailles, and he was elected to the French Academy in 1672. Five years later he was appointed royal historian. In this capacity he was responsible for the writing of the official history of the reign - in collaboration with his friend the critic Nicolas Boileau - and, as a consequence, was obliged to accompany the king on his military campaigns. His final honour came in 1690, when he was appointed gentleman of the bedchamber (a personal attendant to the king), a post made hereditary three years later.

xxxxxRacine was one of the greatest poets France has produced, and, by his mastery of classical French tragedy in the 17th century, he surpassed his older contemporary, Pierre Corneille, by the lyricism of his poetry, the simplicity of his style, and the more realistic portrayal of his characters and plots. He is regarded today as one of the world’s greatest playwrights. He died in 1699, probably of cancer of the liver, and, at his own request was buried in the graveyard at Port Royal. When the abbey was destroyed by royal decree in 1710, his body was re-interred at Saint-Étienne-du-Mont.

xxxxxA friend of Racine and Molière, the French fabulist Jean de La Fontaine (1621-1695) is known above all for his 240 Fables, begun in 1668. Delightfully composed, charming in concept, and serious in aim, many are poetic masterpieces in miniature. A large number of them use classical heroes or animal characters to teach a moral lesson, and are based on ancient writers like Aesop or from later storytellers like Rabelais. All were enlarged and embellished by Fontaine’s lively imagination, and those influenced by his unique style include Hans Christian Andersen, Lewis Carroll, Kenneth Grahame and Beatrix Potter. His other major work was his Tales and Novels of 1674, a set of ribald stories told in a witty, amusing way. 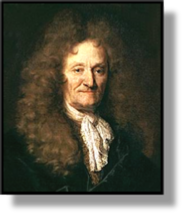 xxxxxA poet who ranks alongside Racine, and with whom Racine became friendly when he was a student in Paris, was the famous French fabulist Jean de La Fontaine (1621-1695). He was born at Chateau-Thierry, Champagne, and educated at the College of Reims, but he lived in Paris much of his life. A plausible individual, he enjoyed the support of a number of patrons including the finance minister Nicolas Fouquet and the dowager duchess of Orleans at Luxembourg. In 1673 Madame de Sablière invited him to live in part of her house, and he thus enjoyed a comfortable living for the next twenty years. Unconventional and seemingly easy-going by nature, he was often accused of indolence but, in fact, he was an ambitious, hard-working writer over some 40 years. 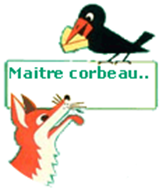 xxxxxHis two major works were his Contes et Nouvelles en vers, completed in 1674, and his Fables choisies mises en vers, begun in 1668, but he also wrote a quantity of poems, plays and opera librettos. Among these were his first published work, the comedy L'Eunuque (The Eunuch), - adapted from the play of that name by the Roman playwright Terence - and his romantic story in verse and prose entitled Les Amours de Psyche et de Cupid (The Loves of Cupid and Psyche), published in 1669.

xxxxxFor the most part, the Contes et Nouvelles (Tales and Novels) were a set of ribald stories told in a witty, amusing style. The subject matter came from various sources, including Boccaccio and Machiavelli, and the five books in which the stories are contained were written over ten years. They established La Fontaine's reputation as a poet of outstanding technical skill, and did much to increase his standing as a member of Madame de Sablière's salon, a meeting place for the leading members of Parisian society, including his friends Molière and Racine. 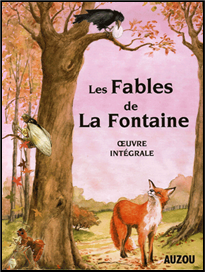 xxxxxBut it is the Fables for which La Fontaine is best known and appreciated throughout the literary world. Delightfully composed, charming in concept, and serious in aim, they have been universally admired by young and old alike. Many may be regarded as poetic masterpieces in miniature, pure in form, bathed in good humour, and using simple country folk, classical heroes 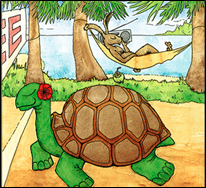 or traditional animal characters to enact stories of human folly from which lessons might be learnt. They cover a wide range of subjects and situations, and many, indeed, may be seen as satirical comments directly aimed at contemporary French society itself. A large number were derived from ancient writers like Aesop and Phaedrus, and some from later authors such as the 16th century storyteller Rabelais, but all were much enlarged and embellished by La Fontaine's lively imagination.

xxxxxNumbering in total about 240 poems, the first collection of six books was published in 1668, and the second collection of five by 1679. The twelfth and last book appeared in 1694, a year before his death. He was elected to the French Academy in 1683, by which time he had become an outstanding literary figure of the day, and one of the greatest fabulists of all time. His fables have become an integral part of French culture, but their influence has also been felt throughout Europe, and their unique style has been imitated by many writers. To mention but a few, these include the Danish storyteller Hans Christian Andersen, and the English writers Lewis Carroll, Kenneth Grahame and Beatrix Potter. 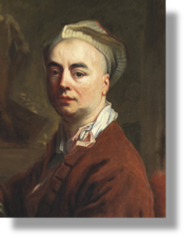 xxxxxIncidentally, the portrait of La Fontaine (illustrated above) was by the accomplished French painter Nicolas de Largillière (1654-1746) (self portrait illustrated on right). He 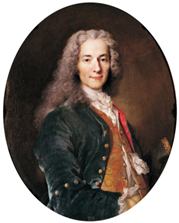 trained in Antwerp and, as a young man, was an assistant to the Anglo-Dutch painter Sir Peter Lely when he was working in London. It was while in England that he painted James II and the Queen at their coronation in 1685. He produced a number of historical paintings, but he made a comfortable living painting portraits among the wealthy middle classes, and this occupied much of his time. Among those who sat for him were the French interior designer Charles Le Brun and the brilliant French writer Voltaire (illustrated left).