xxxxxThe Irish chemist and physicist Robert Boyle was a pioneer in the use of observation and laboratory experiment as the basis of scientific method. He has come to be regarded as one of the founders of modern chemistry. In his Sceptical Chymist of 1661 he came close to explaining the theory of matter, and he was the first chemist to distinguish between acids, bases and salts. In physics he worked with his assistant Robert Hooke in making an advanced air pump, and he used this in many of his experiments. He is remembered today for “Boyle’s Law” concerning the pressure and volume of a gas, and in this connection he made progress towards an atomic theory. Other research included a study of sound, and the properties of air. He was a member of the Royal Society. His close friends included John Wallis and John Locke, and many of his findings assisted the work of Isaac Newton (1687 J2). 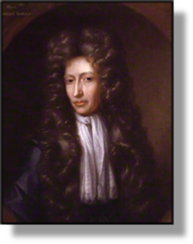 xxxxxThe Irish chemist and physicist Robert Boyle was a pioneer in the use of observation and laboratory experiment as the basis of scientific method. He saw only limited value in a chemical theory based on the medieval notion that material was made up of four so-called "elements", earth, water, air and fire. He argued that the true aim of chemistry was to describe accurately the different properties of chemical elements, compounds and mixtures, and to discover the ways in which these various substances were related. It is hardly surprising, therefore, that the term "analysis" was coined by him, or that he has come to be regarded as one of the founders of modern chemistry.

xxxxxBoyle was born into a wealthy family in Lismore, County Waterford. He went to Eton at the age of eight and then spent four years travelling in Europe with his tutor, spending most of the time in Switzerland. A highly intelligent and inquisitive young man, it was while on the continent that he studied the works of Galileo and became interested in science. He returned to England in 1644, during the civil war, but he took no part in the conflict. He lived for a time in Dorset, and then in 1656 moved to Oxford and set up his own laboratory. Then in 1668 he went to London to live with his sister Katherine, Lady Ranelagh. There, vitally interested as he was in the advancement of science, he became a very active member of a small group of scholars which met regularly in London from about 1645 onwards. Sometimes known as the Invisible College, this gathering made up the nucleus of the Royal Society, founded in 1662. He was elected president of the society in 1680, but declined the honour. Numbered among his close friends were the English mathematician John Wallis and the English philosopher John Locke.

xxxxxIn his major work, The Sceptical Chymist of 1661, he came close to the theory that matter is made up of different sorts and sizes of "corpuscles", and that these are capable of arranging themselves into specific groups, each group forming a chemical substance. In distinguishing between mixtures and compounds, he demonstrated that a compound can possess very different qualities from the mixtures from which it is made. He was the first chemist to isolate and collect a sample of gas, and he also introduced into his research a number of plant extracts, such as litmus, to assist in the identification of acids and bases. He was, in fact, the first chemist to distinguish between acids, bases and salts.

xxxxxBut whilst chemistry was Boyle's first love, he is best remembered for the advances he made in physics. In about 1659, together with his assistant Robert Hooke, he put together a much improved air pump, and this enabled him to carry out a number of valuable experiments. Most important amongst these was the one conducted in 1662 concerning the properties of any gas, such as air. By hands-on research he formulated the law of physics which is known today as "Boyle's Law". This states that, given constant temperature, the pressure and the volume of a gas are inversely proportional. In other words, by compressing a gas to a half of its initial volume, its pressure is doubled (as the diagram shows). From this he made a further conclusion. He realised that for air to have elasticity - what he termed "air's spring" - it must be made up of particles separated by space. In this finding he came close to the development of an atomic theory.

xxxxxBoyle also studied sound. By suspending a bell in a vacuum, he demonstrated that the transmission of sound made by its clapper depended on a medium such as air. In a vacuum the bell made no sound at all. And in like experiments, he showed that animals could not live without air and that most substances would not burn without it. Furthermore, after studying how solids increase in volume when heated, he went on to produce a thermometer, and used it to show that in normal conditions the human body has a fixed temperature. He is also credited with the invention of the first match, and further research included a study of the phenomenon of bioluminescence, the refractive powers of crystals, and the qualities of spring water.

xxxxxA deeply religious man, he learned Hebrew, Greek and Syriac in order to further his knowledge of the Bible, and he wrote a number of works on theology, including his The Christian Virtuoso, published in 1690. He assisted financially in the cost of printing the bible in several languages, and by means of his will he founded the Boyle Lectures "for proving the Christian religion against notorious Infidels".

xxxxxBoyle was a man who strongly believed that experiment must be the test of theory. As a result, his pioneering research made important advances in both chemistry and physics. As we shall see (1687 J2), his findings provided a sound foundation for the advances made in these subjects by the English scientist Isaac Newton.

xxxxxIncidentally, while living in Dorset, Boyle wrote a number of moral essays, some of which were published in 1655 under the title Occasional Reflections upon Several Subjects. It is said that one of these essays inspired the Anglo-Irish satirist Jonathan Swift to write his Gulliver's Travels in 1726. 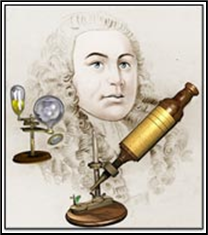 xxxxxIn much of his work Boyle was assisted by the talented English scientist and inventor Robert Hooke (1635-1703). He was born at Freshwater on the Isle of Wight, the son of a poor clergyman, but he managed to obtain a place at Oxford University in 1653. It was there that he met Robert Boyle and began working for him, helping with his experiments and making most of the apparatus needed. Possessing as he did a natural skill in mechanics, he was of particular help in the making of Boyle's air pump (illustrated below) - a more advanced version than the one produced by the German physicist Otto von Guericke a few years earlier.

xxxxxLike Boyle, he was a keen member of the small group of scientists who held regular meetings at Gresham College, London, from about 1645. When this loose association developed into the new Royal Society in 1662, he was appointed the society's first curator of experiments, and proved admirably suited for the task. Over the next 15 years he presided over a large number of lectures, demonstrations and experiments, and these did much to enhance the society's reputation and ensure its survival. During this time he was also professor of geometry at Gresham College.

xxxxxOver the years he put his mechanical skills to good use in a number of ways. In about 1660, for example, he invented the balance spring in the workings of a watch, and he also devised improvements in the making of pendulum clocks - innovations which he passed on to Thomas Tompion, the talented English watchmaker of this time. He also designed a calculating machine, and produced a reflecting telescope which, among other findings, enabled him to make detailed sketches of Mars and put forward the theory that Jupiter rotated on its axis. 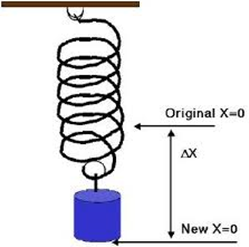 xxxxxHis greatest achievement in physics, however, came in 1678. It was then that improvements he had made to the chronometer enabled him to discover the law of elasticity, later known as Hooke's Law. This stated that the stretching of a solid body (e.g. a spring) is proportional to the force applied to it. In other words, if the weight on a spring balance is doubled, the spring moves twice the distance. A man of wide interests, he also researched - with less success - into the theory of light, the possibilities of steam power, the manufacture of artificial fibres, and the phenomenon of gravity, going some way - he argued a long way - towards the ideas later put forward by Isaac Newton.

xxxxxIn the field of biology, where he again broke new ground, his notable contribution was contained in his Micrographia (Small Drawings). This work clearly showed the immense value of the microscope (which he had improved for the purpose!) in biological research. It contained a fine collection of enlarged drawings of insects, birds and parts of animals, some possibly by the hand of Christopher Wren. It was while working on this project that he studied a thin slice of cork and noticed that it was 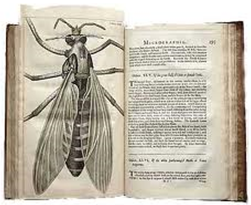 made up of tiny rectang 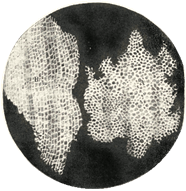 ular holes (illustrated right). He called these "cells" from the Latin word meaning "small room" and this term has survived to denote the basic unit of living things. He also insisted that fossils were the remains of organic creatures and went so far as to suggest the mutability of species when these remains bore no resemblance to any known living creature - the first step towards a theory of evolution.

xxxxxFollowing the Great Fire of London in 1666, he was appointed a city surveyor - along with the architect Christopher Wren and the diarist John Evelyn - and he put forward plans for the rebuilding of the city. These provided for a more regular street plan, but because time was short they were never adopted. In the 1670s Hooke entered into a lengthy correspondence with the scientist Isaac Newton, and this led to a great deal of bitter feeling between the two men. It would seem that, rightly or wrongly, Hooke felt that Newton had taken the credit for discoveries he had himself made, particularly in matters related to planetary motions and the properties of light. This heated exchange eventually caused Newton to have a nervous breakdown in 1678, and he withdrew from public life for some six years.

xxxxxIn much of his work Boyle was assisted by the English scientist and inventor Robert Hooke (1635-1703). In 1662 he was appointed first curator of experiments for the Royal Society and this greatly aided his research. Apart from helping with the making of an advanced air pump, he made inventions in clock-making - which he passed on to the clockmaker Thomas Tompion - and designed a calculator and a reflecting telescope. His greatest achievement was the discovery of the law of elasticity, later known as “Hooke’s Law”, but his research also covered the theory of light, the possibility of steam power, and the phenomenon of gravity. Some of his findings led to a bitter quarrel with the scientist Isaac Newton. In the field of biology his Micrographia contained a fine collection of drawings of insects, birds and parts of animals. It was in this work that he introduced the word “cell”, and through his interest in fossils he made the first tentative step towards the theory of evolution. Following the Fire of London of 1666, he worked with the architect Christopher Wren and the diarist John Evelyn, in planning the rebuilding of the city.