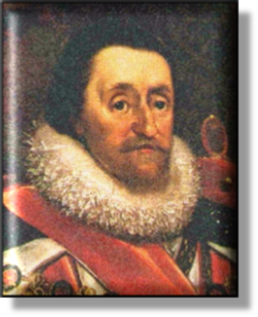 xxxxxThe only son of Mary Queen of Scots and her second husband Lord Darnley, James succeeded to the Scottish throne as James VI at the age of one, following his mother's abdication in 1567. He had a troubled minority, being a pawn amid rival factions, but he came to power in his own right in 1583 and from then on kept a tight grip on the affairs of state. On the death of Elizabeth I in 1603, he succeeded to the English throne as James I, the first of the Stuart line and the most experienced monarch to wear the crown since William the Conqueror. Taking the title King of Great Britain, he then lost no time in emphasising his belief in the Divine Right of Kings, a doctrine which he clearly spelt out at the Hampton Court Conference in 1604, and which he had propounded earlier in his work The True Law of Free Monarchies. 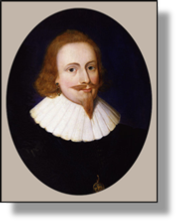 xxxxxFor nine years he was guided by his skilful minister Robert Cecil, but following his death in 1612, he soon allowed court favourites to play a significant role in the affairs of state - particularly the incompetent Robert Carr, Earl of Somerset (illustrated), and the arrogant George Villiers, Duke of Buckingham. Extravagant by nature, he lavished expensive gifts upon these and other favourites, and appointed a number of friends to positions of high office. This not only lost him popular support, but also added fuel to his growing conflict with Parliament, already beset by a number of heated exchanges. Here, his firm belief in his God-given right to govern was at dangerous odds with Parliament's concept of its own rights, particularly in financial matters. As far as the king was concerned, members of Parliament were simply there to do his bidding. But that is not how Parliament saw it. It is hardly surprising, therefore, that in 1611 the "Great Contract", by which James hoped to obtain an annual sum from Parliament, came to nothing. Nor is it surprising that, after the failure of the Addled Parliament of 1614 - so called because it passed no legislation - James ruled without Parliament for seven years - selling peerages and raising taxes illegally to help pay towards his spiralling debts. The final showdown came in 1621 when, following a misunderstanding over the king's policy towards Spain, the Commons issued a Protestation, setting out a statement of their liberties. James promptly sent for the Commons journal and personally tore out the relevant pages!

xxxxxBut for most people it is over matters of religion that the reign of James I is best remembered. He was embroiled in doctrinal strife soon after coming to the English throne. A convinced Presbyterian, he made it clear from the start that he would "harry from the land" any kind of religious extremism. This harsh warning resulted in a number of conspiracies against the king, including the abortive Gunpowder Plot of 1605 - all the work of Catholic extremists -, whilst his conciliatory attitude towards the Spanish, his ending of support for the Dutch, and his refusal to reform more drastically the Church of England, lost him the favour of the Puritans - the Protestant extremists. Indeed, alienated by his High Church views, many Puritans emigrated to the continent, and it was a small band of these who returned to England and, known as the Pilgrim Fathers, set sail from Plymouth in 1620 to settle in the New World. Meanwhile, in Ireland James continued and intensified the plantation policy introduced by the Tudors. His Ulster Plantation scheme, started in 1610, encouraged the settlement of a large number of English and Scottish Protestants into the north of the island.

xxxxxIn his foreign policy it would seem that he did make a genuine attempt to bring about peace on the continent, then being ravaged by the Thirty Years War. In 1604 he ended the war with Spain and in 1613 he married his daughter Elizabeth to the leader of the German Protestants, Frederick V, probably hoping to be some kind of mediator between the two warring sides. Later, however, coming under the spell of the Spanish ambassador, the Count of Gondomar, and oblivious it would seem to the effect it would have on English public opinion, he embarked upon a scheme to marry his son Charles, heir to the throne, to the Roman Catholic Infanta of Spain. In 1523 Charles and the Duke of Buckingham actually visited Madrid incognito to make arrangements for the marriage. And when this marriage plan failed in 1624, he tried to make one between Charles and Henrietta Maria, daughter of the French king, Henry IV, a proposition that only served to fan the flames then spreading across the continent. Only much further afield, across the Atlantic in fact, did he achieve some success. In 1606 he chartered the London Company, and the following year this did succeed in founding England's first successful colony in North America, the settlement of Jamestown on the coast of Virginia.

xxxxxOver the years, James I has not received a very good press. It is said that he did not have an attractive personality and that, despite an unfortunate stammer, he liked the sound of his own voice, earning himself the title of "The Wisest Fool in Christendom". However, much of this criticism would seem to have come from his detractors and must be viewed with caution. He was an intelligent man, and is regarded as one of the most successful of Scottish kings. As an English king his failure lay, above all, in his inability to read the changing times. His dogged belief in the royal prerogative set him on a direct collision course with a Parliament which was just beginning to flex its political muscle. He might well have achieved all his aims had he put away the big hammer and learnt the subtle art of managing the English parliament, but he didn't really have the temperament that this required. He died, we are told, warning his heir of the dangers he faced from Parliament. That is one thing he certainly got right!

xxxxxSomething of a pedant by nature, James I was not without literary ambition. During his lifetime he wrote a number of books. His Counterblast to Tobacco, written in 1604, must be seen as leading the country's first anti-smoking campaign, and his Book of Sports angered the Puritans by his open support for playing certain games on a Sunday - like archery, Morris dancing and "May-games". He also produced a book on witchcraft, wrote two volumes of mediocre poems, and, as we

have seen, defended the Divine Right of Kings in his True Law of Free Monarchies. And it was James, of course, who in 1611 commissioned the production of the Authorised Version of the Bible, a translation from Latin into English which proved a masterpiece of Jacobean prose and is still used in many churches today. 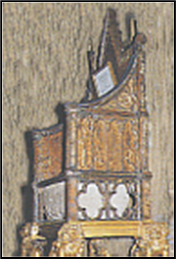 xxxxxIncidentally, James I was crowned in Westminster Abbey on a coronation chair that held beneath it the Stone of Scone, for centuries associated with the crowning of Scottish kings. This stone had been brought from Scotland to London by Edward III in 1296, where it was seen as a symbol that English kings would also be crowned kings of Scotland. However, legend has it that attached to the stone at one time was the following prophecy:

Unless the fates be faulty grown

And prophet's voice be vain

Where'er is found this sacred stone

The Scottish race shall reign.

xxxxxAfter a gap of some 300 years the legend was fulfilled when in 1603 the Scotsman James VI became ruler of England as James I! ……

xxxxx…… James I discovered Newmarket Heath in February 1605, and saw its potential as a racecourse. He built the first grandstand there, and the first recorded race was held in March 1622. In the world of horseracing, it was the start of something big.