xxxxxAs we have seen (1565 L1), Boris Godunov became Tsar of Russia in 1598, succeeding Ivan the Terrible’s feeble minded son Fyodor. His sudden death in 1605 plunged the country into nine years of anarchy called “The Troubled Years”. In 1610, taking advantage of the situation, a Polish army invaded Russia, but two years later a national force, raised in the north-east, marched on Moscow and expelled the Poles. In 1613 Michael Romanov, the great-nephew of Anastasia Romanovna, wife of Ivan the Terrible, was elected Tsar, the first of a dynasty which was to rule Russia until 1917. The young Tsar was only 16, and the country was in a state of collapse, still occupied in parts by Polish and Swedish troops. However, the civil service in Moscow had survived and, over the next ten years an understanding was reached with the Poles and Swedes, and, for the most part, Russia was kept out of the Thirty Years’ War, then devastating much of Europe. At home, order was generally restored, but nothing was done to tackle the deep-rooted social problems, especially the plight of the peasantry. As we shall see (1649 CW), the condition of the serfs was bad and due to become worse. 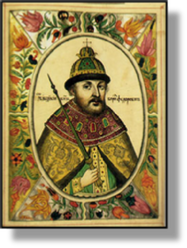 xxxxxAs we have seen (1565 L1), Boris Godunov became Tsar of Russia in 1598 following the death of Tsar Fyodor, the feeble-minded son of Ivan the Terrible. He was in power for over twenty years and, by dint of some well-needed reforms and the establishment of a much-feared secret police, he managed to keep the country together. In 1603, however, a pretender to the throne arrived on the scene - the so called False Dmitry - and, with the support of the Poles, marched into Russia the following year. The invasion was easily repulsed by imperial troops, but a few weeks later Godunov (illustrated) suddenly died, and the country was thrown into confusion.

xxxxxThere followed what has been termed "The Troubled Years", a period of nine years of chaos and anarchy. Five months after the death of Boris, in 1605, the "pretender", backed by the Cossacks and nobles from Poland and Lithuania, entered Moscow and was crowned Tsar as Dmitry I. He proved an able ruler, but the boyars, still stripped of much of their former power, rose up in revolt and murdered him. They put Prince Vasily Shuysky in his place, but this alarmed the peasants who, fearing a return to the oppressive rule of the boyars, rose in rebellion in southern Russia and supported a second pretender, Dmitry II. In the meantime, the Polish king, Sigismund III, seeing his chance to seize the Russian throne, invaded from the West, whilst Sweden, still locked in conflict with Poland, sent aid to the Tsar. After another period of in-fighting, however, Prince Vasily was deposed in 1610, and a Polish army occupied Moscow and attempted to take control of the country - a move supported by the boyars. 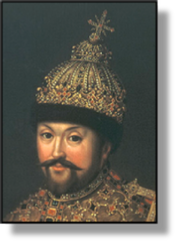 xxxxxIt was amid such total chaos that the crisis was finally resolved by a merchant of Nizhny Novgorod named Kuzma Minin. He organized the financing of a national army in northeast Russia, and in 1612 this force, led by Prince Dmitry Pozharsky, marched on Moscow and expelled the Poles. The following year (1613), a Zemsky Sobor (Assembly of the Land) elected the teenager Michael Romanov as Tsar (illustrated), the great-nephew of Anastasia Romanovna, wife of Ivan the Terrible. Accepting the throne with reluctance - and understandably so! - he was the first of a dynasty which was destined to rule until 1917, and develop Russia into a vast and despotic empire.

xxxxxThe new Tsar, aged sixteen, and his battered régime faced a daunting task. The civil conflict and foreign invasions had left many parts of the country in ruins, large areas were still occupied by Swedish and Polish forces, and regional administration had virtually collapsed. Furthermore, because of his youth, he was dominated first by his mother and then by his father, released from Polish captivity in 1619. But the coalition that had brought him to power was a compromise anxious to bring some order out of chaos. Furthermore, the civil service in Moscow had survived and, as an experienced body, was capable of re-organizing the country's administration once some degree of order had been restored.

xxxxxIt took over ten years for the Romanov administration to achieve some measure of success. During these years advantage was taken of the continuing conflict between Sweden and Poland. A truce was agreed with both states, though large areas of land were lost to both countries as a necessary price for peace. And Russia, already near to collapse, wisely avoided any serious involvement in the Thirty Years’ War that was carving a path of destruction across much of Europe. At home, too, order was generally restored, and some reconstruction of agriculture and local government was achieved, but little, if anything, was done to address the deep-rooted social problems besetting the country, particularly the worsening plight of the peasantry. As we shall see (1649 CW), for the serfs of Russia matters were to become much worse before they were to became slightly better. 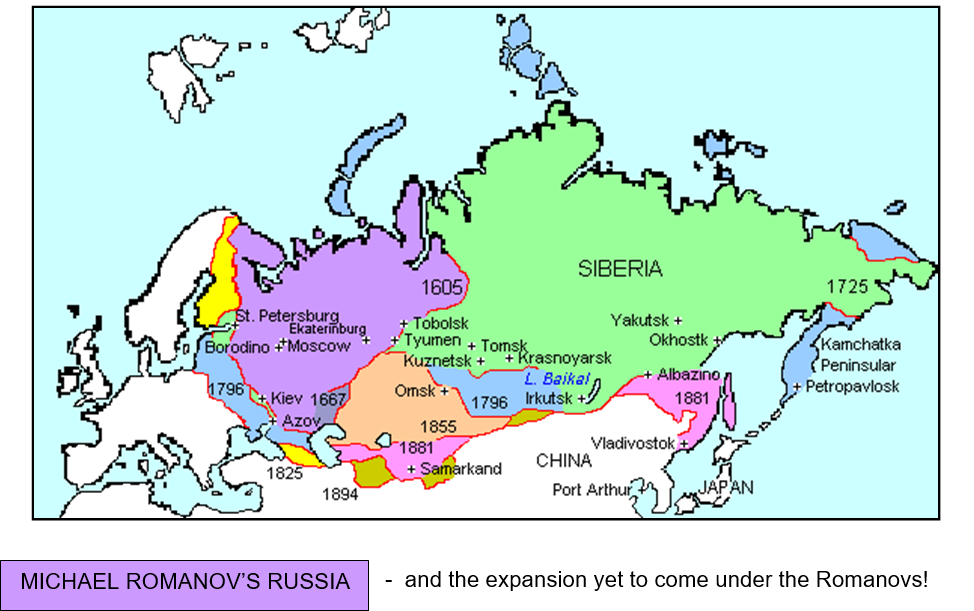