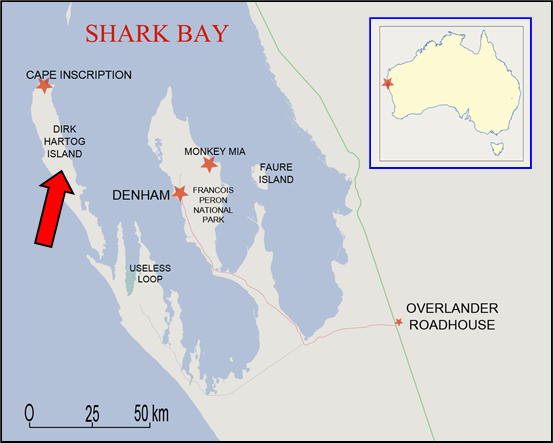 xxxxxThis discovery by Willem Jansz, the first recorded sighting of Australia by a European, encouraged more of his countrymen to explore the southern seas. In about 1616, for example, a Dutch navigator, Dirk Hartog (1580-1621), made the first recorded exploration of the western coast of Australia, and became the first European to actually land on Australian soil. He spent three days on an uninhabited, offshore island and named it after himself. Before leaving, he left a pewter plate inscribed with details of his visit. In 1696 another Dutch explorer, Willem de Vlamingh (1640-c1698) landed on "Hartog Island" and discovered the plate nailed on a post in the north of the island. He replaced it with a new dish and sent the original plate to Amsterdam, where it is now on display in the Rijksmuseum. Today, the place where the plate was found is called "Cape Inscription". As we shall see (1642 C1), one of the most successful of these early Dutch explorers was to be the outstanding navigator Abel Tasman.

xxxxxIn about 1616, the Dutch navigator Dirck Hartog (1580-1621) made the first recorded exploration of the western coast of Australia, and became the first European to actually land on Australian soil, spending three days on an uninhabited offshore island which he named after himself. As we shall see, in 1642 (C1) another Dutch navigator, Abel Tasman, came out to explore Australia’s coastline.

xxxxxIn 1606 two Spanish explorers, Pedro Fernandez de Quiros (1563-1615) and Luis Vaez de Torres (?-c1613), reached the islands of the New Hebrides (today’s Vanuatu) in the Pacific. Quiros, convinced that these were part of the so-called Terra Australis Incognita (The Unknown Southern Land) named them Australia del Espiritu Santo. Torres then voyaged on, and eventually reached the south coast of New Guinea, sailing along the strait which today bears his name. Having reached the island’s west coast he then turned north and reached Manila. Had he turned south he would have found the Unknown Southern Land he was seeking! 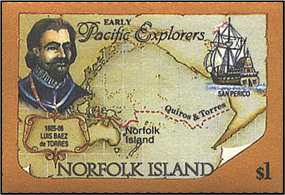 xxxxxIt was in 1605 that two Spanish explorers, Pedro Fernandez de Quiros (1563-1615) and Luis Vaez de Torres (?-c1613) mounted an expedition to find the so-called Terra Australis Incognita (The Unknown Southern Land). When in 1606 the two ships reached the New Hebrides (now called Vanuatu), Quiros was convinced that this archipelago was part of the great southern continent believed to exist in the South Pacific. He named the group of islands Australia del Espiritu Santo and declared it a worthy site for the founding of the "New Jerusalem". 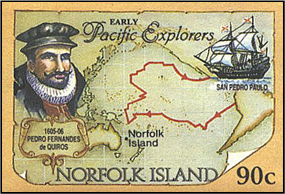 xxxxxQuiros then become separated from Torres, and decided to make for home, but Torres voyaged on and reached the east coast of New Guinea. Here he explored a large inlet ("Milne Bay" - so named in 1873), and then sailed along the southern coast of the island, totally unaware that to the south of him there was, indeed, the continent he had set out to discover! Nor would he have ever imagined that the narrow strait he then navigated between the two land masses (about 80 miles wide) would one day bear his name! 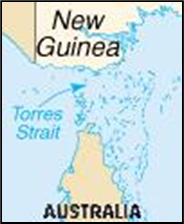 Having reached the western extremity of the coastline - thus proving that New Guinea was indeed an island - he sailed northwards and reached Manila in the Philippines in 1607. It is believed that he died there.

xxxxxIn fact, the "Torres Strait" had already been sighted a few weeks earlier by the Dutch navigator Willem Jansz (c1570-c1629). In command of the Duyfken, he had sailed from Bantam in the Dutch East Indies in 1605, and the following year had reached the western side of the Cape York Peninsula, naming part of the coast Cape Keer-Weer.