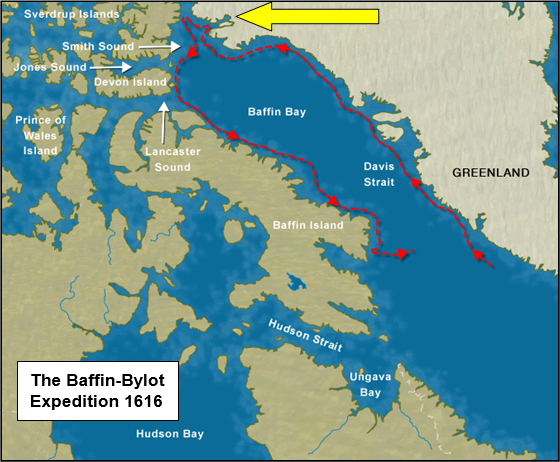 xxxxxInx1616, five years after Hudson’s tragic end, another experienced English explorer, William Baffin (1584-1622), accompanied by his countryman captain Robert Bylot, explored what came to be known as Baffin Bay in north-east Canada. They discovered the Lancaster and Smith Sounds, and reached just beyond latitude 77 degrees, a point which remained the northern limit of man's discovery for over 235 years.

xxxxxEarlier, in 1612, Baffin served as chief pilot on the sailing ship Patience during an expedition in search of the Northwest passage, and in 1615, after commanding a whaling fleet near Spitsbergen in Norway, he served under Bylot aboard the Discovery in a voyage to Hudson Bay. After his visit to Baffin Bay in 1616, he worked for the East India Company, making surveys of the Persian Gulf and Red Sea. In 1622, on his final voyage to the Middle East, he was killed during an Anglo-Persian attack on Queshm Island in the Persian Gulf.

xxxxxIncidentally, it appears that Baffin was the first navigator to try to determine longitude by making observations of the moon. Apart from the Bay, Baffin Island, the fifth largest island in the world, is also named after him. ……

xxxxx…… In honour of his achievements, Baffin had a rose named after him. The William Baffin Rose was bred in Canada in 1974 and introduced there in 1983. But he does not bloom alone! Amongst others included in this Canadian Explorer series of roses are George Vancouver, John Cabot, Martin Frobisher and Henry Hudson.

xxxxxIt was in 1616, five years after Hudson’s disappearance, that another English explorer, William Baffin (1584-1622), explored what came to be known as Baffin Bay in north-east Canada, and reached beyond latitude 77 degrees. This remained the northern limit of man’s discovery for over 235 years. Later, he worked for the East Indian Company, making surveys of the Persian Gulf and Red Sea. He was killed during an Anglo-Persian attack on Queshm Island in the Persian Gulf.

xxxxxAfter two unsuccessful attempts to find a north-east passage to China, the English explorer Henry Hudson, working for the Dutch East India Company, reached New York Bay in 1609 and sailed some 150 miles up the river that now bears his name, claiming the land for the Dutch. In 1610, sailing for the English, he returned to North America and explored what is now called Hudson Bay. Here, however, his ship, the Discovery, became icebound. Suffering from severe hunger, his crew mutinied on the return journey and turned Hudson, his son, and seven others adrift in an open boat. They were never seen again. 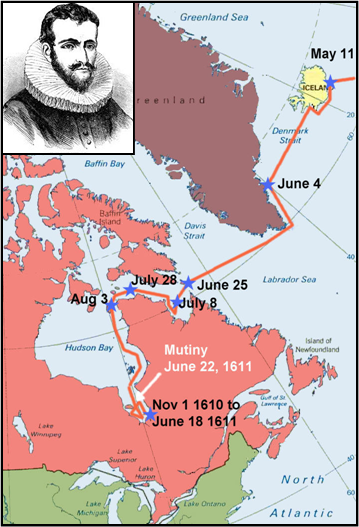 xxxxxIt was in the years 1607 and 1608 that the English explorer Henry Hudson, commissioned by the English Muscovy Company and sailing in the Hopewell, made two unsuccessful attempts to find a north-east passage to China. The following year, however, while working for the Dutch East India Company and attempting to discover a north-west passage, he reached New York Bay in the Half Moon. He sailed some 150 miles up the river that now bears his name - reaching close to the site of present-day Albany - and, before returning home, claimed the area for the Dutch.

xxxxxIn 1610, having been commanded to serve only the country of his birth, he returned to North America in the Discovery, sailing again on behalf of the English Muscovy company, but with the additional support, this time, of the English East India Company. He entered the Hudson Strait and spent three months exploring the eastern area of what is now called Hudson Bay (see map). It was here, however, that, his ship became icebound and, following a particularly harsh winter and a severe lack of food, some of his crew mutin 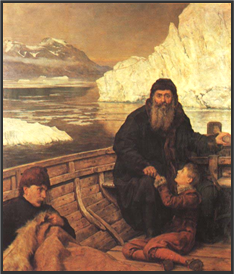 ied. In June 1611, during the homeward voyage, they turned him, his son, and seven others adrift in a small boat (illustrated). They were never seen again.

xxxxxIncidentally, nothing is known of Hudson's early life, but the 1585 Arctic expedition by the English navigator John Davis was planned in the home of a Thomas Hudson of Limehouse, London. It is possible that the young Henry was a relation of this Hudson and was present when the voyage was being planned. This would certainly account for his lifelong interest in Arctic exploration.