xxxxxThe Mayflower left Plymouth on 16th September 1620 with 101 men, women and children aboard. Among this number was a party of 37 Puritan refugees who, claiming that the English Reformation had not gone far enough, sought to start a new life in North America. On arriving near present-day Provincetown in Massachusetts, they founded Plymouth Colony on the 21st December. At first they faced severe hardship and, over the first winter, half of them died. Within a decade, however, the “Great Migration” had begun. In 1630 alone a fleet of ships brought in more than 1000 Puritan immigrants. However, such numbers alienated the local native population and led to conflict. 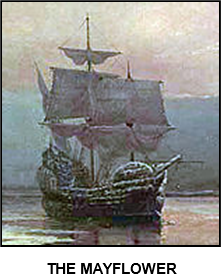 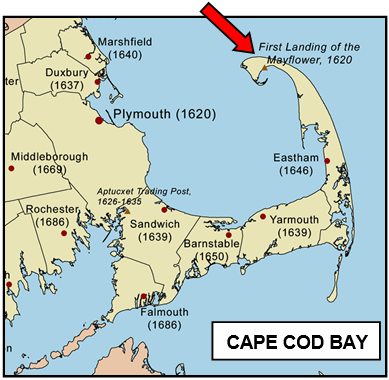 xxxxxTwo ships actually sailed from England in 1620 with the aim of founding an English colony in the New World; the Mayflower and the Speedwell. They set sail from Southampton in August of that year. They were then forced to put into Dartmouth to carry out repairs on the Speedwell, and then bad weather drove them into Plymouth Sound, where the Speedwell had to be abandoned. The Mayflower eventually left Plymouth on the 16th September with 101 men, women and children aboard. Among these "Pilgrim Fathers", as the settlers later came to be called, was a party of Puritan refugees, 37 in number. These were "Brownists", a group of separatists who had left the Anglican Church on the grounds that the English Reformation had not gone far enough. They had previously emigrated to Holland from Scrooby in Nottinghamshire in 1608, and then returned to England where their leader, John Carver, had chartered the Mayflower and the Speedwell to take them and others to North America. 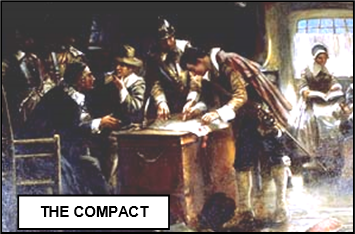 xxxxxThe original destination of the Pilgrim Fathers was Virginia, where the colonists had permission to settle, but stormy weather blew the vessel off course (or was it errors in navigation?) and the Mayflower eventually rounded Cape Cod and dropped anchor near the site of present-day Provincetown in Massachusetts (arrowed on map above). A tall granite monument, known as Pilgrims Mount, commemorates their landing. But no sooner had the New World bee 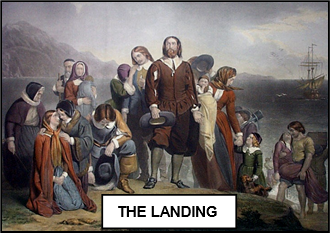 n reached, and before anyone had even set foot on American soil, a number of the passengers, no longer bound by the dictates of the Virginia Company, spoke of going it alone. This was prevented by the "Mayflower Compact", the first constitution written in America, which was drawn up and signed aboard the Mayflower by 41 of the men. This formed a "civil body politic" (a temporary government), based on the rule of the majority and empowered to make laws for the general good of the settlement. 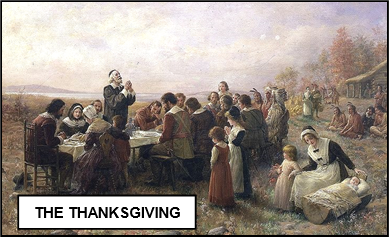 xxxxxFrom this spot a party explored the coastline and, having selected a satisfactory site, the Pilgrims disembarked near the head of Cape Cod on the 21st December (Forefather' Day) and founded Plymouth Colony, the first permanent settlement in New England. In November 1621 the colonists celebrated their first Thanksgiving Day (illustrated).

xxxxxInxtheir early years the Pilgrims experienced great hardship. Half the settlers died during the first winter. Only the strong leadership shown by Governor William Bradford, together with the assistance given by local Indians, saved the colony from extinction. Within a decade, however, large numbers of English people began to flood into the area. In 1630 a fleet of ships brought over one thousand Puritan immigrants, and this was but the beginning of what came to be known as the "Great Migration". Understandably, such numbers alienated the local native population and led to conflict.

xxxxxIncidentally, in Plymouth, Massachusetts are to be seen the Plymouth Rock - the large boulder on which, it is alleged, the Pilgrims first set foot upon American soil - and a close replica of the Mayflower, built in Plymouth, England, and sailed across the Atlantic in 1957 .......

xxxxx…… Peregrine White was the first English child born in New England, delivered aboard the Mayflower in 1620 soon after it arrived in Cape Cod Bay. …… 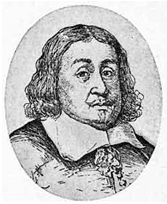 xxxxx…… Onexof the first missionaries to work among the American Indians was the English evangelist John Eliot (c1604-1690). He emigrated to Boston in November 1631 and soon set about preaching to the Massachusett Indians, first in 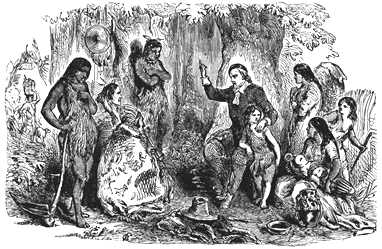 English and then in their native tongue. During a lifetime devoted to their well-being, he set up a number of towns where Indian converts (“praying Indians”) could continue their own but Christian way of life, and in 1663 he translated the bible into their own language, the first to be printed in North America. For his missionary work and writings, which included The Christian Commonwealth and The Harmony of the Gospels, he became known as “the Indian apostle”.