xxxxxAs we have seen (1599 L1), the great English playwright William Shakespeare wrote or helped in the making of 38 plays ranging from amusing farces to powerful dramas. Among his most notable works during the Elizabethan period were historic plays, like Henry V, comedies such as A Midsummer Night’s Dream and As You Like It, and famous dramas like Romeo and Juliet, Julius Caesar and Hamlet. In this reign he is best known for his dramatic works, Othello, King Lear and Macbeth (1606). Later plays included The Tempest and The Winter’s Tale. In these, as in much of his earlier work, he shows a remarkable understanding of every human emotion, and a deep insight into the diverse nature of the human character. Few writers have surpassed him in the width of subject matter and the quality and beauty of the written word. Many of his plays were produced at The Globe Theatre, and he was a frequent visitor to the Mermaid Tavern, a meeting place for well-known literary figures such as Sir Walter Raleigh, John Donne and Ben Jonson. He was buried in Holy Trinity Church at Stratford-on-Avon, his birthplace. Shakespeare never published any of his works, so it is indeed fortunate that two of his friends, John Heming and Henry Condell, compiled a Folio of his plays, 36 in total, and published it in 1623. 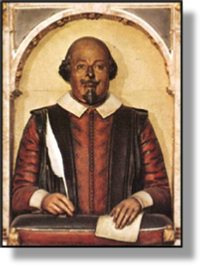 xxxxxAs we have seen (1599 L1), the brilliant English playwright William Shakespeare was born at Stratford on Avon and, after being educated at the local grammar school, worked locally for a time, possibly as a schoolteacher or an apprentice butcher. We know that he married a local girl, Anne Hathaway, in 1582, but we don't catch up with him again until a decade later, when we discover him in London working as an actor and playwright. So successful was he in this new-found profession that as early as 1594 he was a leading member of the Lord Chamberlain's Company of actors and, within ten years, was the principal playwright and a director of the company, now renamed The King's Men in honour of the new king, James I.

xxxxxThe quality of his plays, written in blank verse together with some prose, mark him out as one of the greatest playwrights of all time. The sheer volume and width of his production are awe-inspiring. Apart from his poetry, he wrote or had a big hand in the making of 38 plays, ranging from the funniest of farces to the most powerful of dramas. Among the most notable of his works during the Elizabethan period are the historic plays Richard II, Henry IV and Henry V; his comedies, A Midsummer Night's Dream, Much Ado About Nothing, As You Like It and the Merry Wives of Windsor; three of his most popular productions, Romeo and Juliet, The Merchant of Venice and Twelfth Night; and two of his most famous dramas, Julius Caesar and Hamlet.

xxxxxHis output during the reign of James I is remarkable above all for a series of great dramas: Othello, King Lear, Macbeth (1606), Antony and Cleopatra, Coriolanus and Timon of Athens. In these, as in the vast majority of his earlier works, he shows a remarkable understanding of every human emotion, and a deep insight into the diverse nature of the human character, be it for good or evil. And he clothed these feelings in a verse that took the English language to new heights of expression as well as beauty. Few if any playwrights have equalled, let alone surpassed, the width of subject matter and the quality of the written word attained by this playwright of genius.

xxxxxMacbeth - a brilliant psychological study of the inter-action between the hero-cum-villain and his ambitious, scheming wife - might well have been produced in 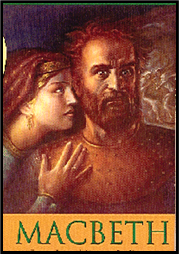 order to honour James I, who claimed descent from the Scottish general Banquo, referred to on stage as "the ancestor of kings". Like many of his historical plays, it was based on material in Holinshed's Chronicles of England, Scotland and Ireland. But in addition to high drama, Shakespeare also produced a number of other notable works towards the end of his career, some portraying a more sombre mood. These include his "dark" comedies Troilus and Cressida and Measure for Measure, and the romantic plays The Winter's Tale and The Tempest. These, like many of his works, were performed privately for the king or for select audiences at Blackfriars Theatre, as well as being staged for members of the general public at the Rose Theatre and The Globe (until it was burnt down in 1613). 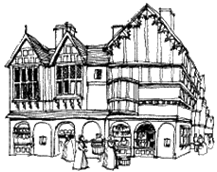 xxxxxIn 1596, through the good offices of his friend the Earl of Essex, his family was granted a coat of arms (illustrated), much to the delight of his father, and by the end of the century Shakespeare was firmly established as a prosperous, landed gentleman. A playwright without equal, he was a frequent visitor to the Mermaid Tavern, situated to the east of St. Paul's Cathedral in the city. This was a famous London meeting place where well-known literary figures would gather during the week. Among its members at one time or another were Sir Walter Raleigh, Francis Beaumont, John Fletcher, John Donne and Ben Jonson, the acknowledged wit of the company. By all accounts some of the meetings became lively affairs, to say the least! The playing of dice or the discussion of learned matters was often punctuated by some rowdy behaviour and the occasional punch-up! The illustration is that of a typical Elizabethan Inn.

xxxxxThe idea that Shakespeare's plays and poems were not, in fact, written by him has been the subject of much speculation over the years. On the grounds that the quality of the work produced was too sophisticated for a man of Shakespeare's somewhat humble origins and limited education, it has been suggested that the writer and philosopher Francis Bacon or Shakespeare's patron, the Earl of Somerset, may well have been the real author. Others have gone so far as to argue that Christopher Marlowe was not killed in a tavern brawl, but journeyed secretly to Italy where he wrote the plays and then paid Shakespeare to produce them! Today, such suggestions are not taken seriously, mainly because Shakespeare's contemporaries, including Ben Jonson, never at any time cast doubt about the authorship of his plays or poetic works.

xxxxxHe retired to Stratford about 1610 and died there on 23 April 1616. He was buried in the chancel of Holy Trinity Church, Stratford-on-Avon, where the following verse is written (reputedly composed by Shakespeare himself):

To dig the dust enclosed here,

Blest be the man that spares these stones,

And curst be he that moves my bones.

xxxxxA few years later a bust of the playwright was placed in a niche in the wall near to his tombstone (illustrated above). Below it was inscribed the words: The worldly wisdom of Nestor, the genius of Socrates, and the poetic art of Virgil. A fitting tribute indeed, but perhaps the most valuable monument to his work was provided in 1623 by his two friends John Heming and Henry Condell. In that year they published the First Folio of his works, 900 pages in length and containing the text of 36 plays. As Shakespeare himself never published any of his dramatic works, without this volume, written to "keep alive the memory of a worthy friend", much of the work produced by this brilliant playwright might have been lost to the world stage, or survived only in pirated or "bad" texts. This First Folio contains a dedication by Shakespeare's friend and rival, Ben Jonson. Three lines must suffice, but they serve well as a final tribute:

Triumph, my Britain, thou hast one to show

To whom all scenes of Europe homage owe,

He was not of an age, but for all time.

xxxxxIncidentally, over the years the works of Shakespeare have inspired many a composer. To mention but four, there is the overture to A Midsummer Night's Dream by the German Felix Mendelssohn (1826); the comic opera The Merry Wives of Windsor by the German Otto Nicolai (1849); the fantasy overture to Romeo and Juliet by the Russian Pyotr Tchaikovsky (1869); and the opera Otello by the Italian Giuseppe Verdi (1887). All are delightful compositions, but it is worth mentioning that Tchaikovsky's work is considered by many to be one of the loveliest pieces of music ever w 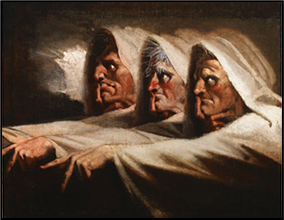 xxxxx…… In the acting profession the drama Macbeth has come to be regarded as “cursed” because of the number of accidents and misfortunes that have occurred during its production. One theory - among many - is that Shakespeare used the spells of real witches when writing up the first scene. Even to this day, many actors and actresses, fearing that the title Macbeth might bring bad luck, simply refer to it as “that Scottish play”!