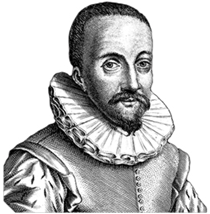 xxxxxThe man who made the first telescope and thus spurred on Galileo to make one of his own, is generally thought to be the Dutch spectacle maker Hans Lippershey (c1570-c1619), although his fellow countrymen, Hans Jansen and his son Zacharias, have also received credit for the invention.

xxxxxThe story goes that Lippershey invented it by chance when he accidentally lined up two lenses of opposite curvature and diverse focal length.

Be that as it may, having constructed what he called his "looker" (kijker) in 1608, he took it to the government and sold it to the military for use in warfare. He was granted 900 florins, but had to produce the spyglass in binocular form. Before the year was out he had sold a number of telescopes, some to Henry IV of France. A Jacques Bovedere of Paris, realising that this invention could be useful in astronomy, told Galileo about it. He promptly built his own - the first of many - and in 1610 became the first man to use a telescope in the study of astronomy.

xxxxxThe Dutch spectacle maker Hans Lippershey (c1570-c1619) is generally thought to be the man who invented the first telescope, possibly by a chance lining up of two suitable lenses. In 1608 he sold what he called his “looker” (kijker) to the government for military purposes. It was then that Galileo got to hear of it and developed his own version - the first of many - for use in astronomy.

xxxxxBy his development of the telescope, a recent invention around about 1610, the Italian physicist and astronomer Galileo was the first to see sunspots, the lunar landscape, Jupiter’s brightest satellites, and Saturn’s rings. In addition, by a closer observation of Venus, he gave visual support to the sun-centred theory of the universe advanced by Nicolaus Copernicus in 1543 (H8). However, his support for this idea brought censure from the church, and in 1633, following the publication of his Dialogue on the two Chief World Systems - Ptolemaic and Copernican, he was obliged to recant his findings before the Inquisition. But his findings were not confined to astronomy. In mechanics, for example, he investigated the laws governing motion, experimented with falling bodies, and made advances in acoustics and the study of waves. And by his study of the pendulum, he made an important contribution to the problem of timekeeping. His final work, Discourses and Mathematical Discoveries Concerning Two New Sciences, revised and clarified his earlier studies in mathematics and mechanics. It testified to his outstanding contribution to the advancement of scientific knowledge, achieved in large part by his powers of observation and the thoroughness of his experimental methods. Apart from telescopes, his inventions included a thermometer and a hydrostatic balance. His work influenced, amongst other scientists, his pupil Torricelli, the German Guericke, the Dutchman Huygens, and the Englishman Isaac Newton (1687 J2). 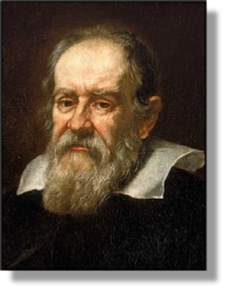 xxxxxBy his development of the astronomical telescope around 1610, the Italian physicist and astronomer Galileo became the first person to see sunspots, the lunar landscape, stars in the milky way, the four brightest satellites of Jupiter, and Saturn's rings (which he called "handles" because he thought they were attached to the planet). Moreover, by observing Venus going through its phases - proving that it was orbiting the sun - he gave visual support to the sun-centred theory of the universe advanced by the polish astronomer Nicolaus Copernicus in 1543 (H8), a theory directly opposed to the ideas of Aristotle then in vogue. But unlike Copernicus, who managed to avoid direct censure by the church, his views were condemned by Rome in 1616. Then in 1633, following another controversial treatise on the subject, he was obliged to recant on his findings before the Inquisition.

xxxxxEarlier, Galileo had already made a number important discoveries. He had determined, for example, that free falling bodies, whatever their weight, have the same constant acceleration - though the story about his dropping cannonballs from the top of the Leaning Tower of Pisa in order to prove his theory is fairly unlikely! And in the development of timekeeping, he had been the first to deduce, around 1581, that each swing of a pendulum takes the same amount of time, regardless of the difference in the arc, a fact that he is said to have discovered by watching a lamp swinging in Pisa cathedral and timing the length of swing by his pulse! In his On the Mechanical Sciences, published in 1592, he had tackled the problems associated with raising weights and, four years later, had invented a thermometer (but not sealed), and had begun to investigate the laws of gravitation. His inventions had included a hydrostatic balance and a sort of proportional “compass” for solving mathematical problems. 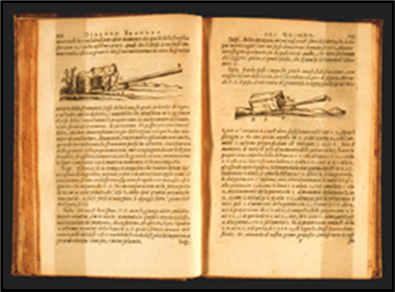 xxxxxGalileo was born near Pisa, son of Vincenzo Galilei, a musician, and educated by the monks of Vallombrosa near Florence. He studied mathematics at Pisa University, and after a period of private teaching, returned as a lecturer in this subject in 1589. Only three years later however, because of his unorthodox views, his contract was not renewed and he went to teach at Padua. It was there that he made a study of mechanics, experimenting with falling bodies and writing a thesis on the specific gravities of solid bodies. In 1610 he attained the post of chief mathematician to the Grand Duke of Tuscany, and he was then able to devote more time to writing and research.

xxxxxIt was at this time that he began to show an interest in astronomy. Having learnt that a type of spyglass had been invented in Holland, he produced his own telescope (some twenty times more powerful than modern field glasses) and turned it towards the skies. His findings, published in his The Starry Messenger of March 1610, produced amazement and not a little scepticism, but it was a paper published three years later in which he came down in support of the Copernican theory that caused the greatest stir among academics and churchmen. The work was labelled as heretical, denounced in public, and, in 1616, was condemned by Rome for contradicting scripture. Worse was to come. 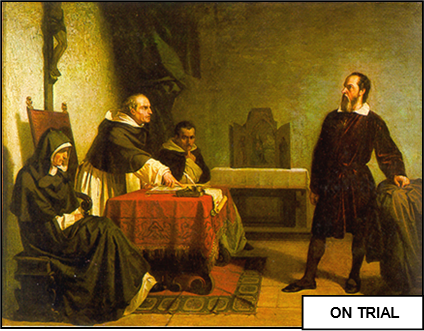 xxxxxHe then spent some years in virtual retirement, writing on comets and trying to find a way of determining longitude at sea. In 1632, however, he returned to the controversial subject of the solar system with the publication of his Dialogue on the two Chief World Systems - Ptolemaic and Copernican. This time he was summoned to Rome, tried for heresy by the Inquisition, and, on his knees, was obliged to state that he "abjured, cursed and detested" his past errors in supporting and teaching the Copernican theory. For his sins, he was put under house arrest and compelled to recite the seven penitential psalms once a week for three years. In addition, the Dialogue was banned and the charges against him were read out publicly in every university in the land. Despite his public retraction, it is clear that Galileo had no doubts as to his findings, but it was not until November 1992, in fact, after a Vatican commission had examined the case in 1984, that the Pope agreed that his concept of the solar system had been accurate!

xxxxxHis final work, Discourses and Mathematical Discoveries Concerning Two New Sciences, revised and clarified his earlier studies, particularly those in the field of mechanics and sound waves. It was smuggled out of Italy in manuscript form, and published in Holland in 1638. By that time Galileo had become blind, and he died at Arcetri, near Florence, in January 1642. He was buried in the Medici chapel in the church of Santa Croce, Florence, in the company of Michelangelo and Machiavelli.

xxxxxDuring his life he made an outstanding contribution to the advancement of scientific knowledge - particularly in the branches of astronomy and general mechanics - and by his practical observation and experimentation, he helped found the modern method by which new scientific laws could be deduced and then applied. As we shall see (1687 J2), the revolutionary theory of the solar system put forward by Copernicus; Kepler's accurate discovery of planetary orbits; and Galileo's new conception of motion, - each discovered in isolation - were combined and then transformed by Isaac Newton into his theory of universal gravitation.

xxxxxAs the founder of modern mechanics, Galileo's influence is to be seen at work in the ten or so years following his death. His fellow Italian Evangelista Torricelli, his most famous pupil, went on to invent the barometer; the German physicist Otto von Guericke produced the first air pump, and the Dutch scientist Christiaan Huygens constructed the first practical pendulum clock.

xxxxxIncidentally, Galileo presented the first telescope he made to the Doge of Venice. Realising its potential on the battlefield and in a war at sea, the Doge promptly doubled his salary! .......

xxxxx…… In 1936 the German dramatist Bertolt Brech wrote a play called The Life of Galileo and a film about him was produced in 1939 with Charles Laughton in the leading role.