xxxxxAs we have seen, Henry IV of France brought the French Religious Wars to an end by the Edict of Nantes in 1598 (L1). But his assassination in May 1610 brought further conflict. His son Louis XIII was only nine at the time, and his mother, Marie de Medici, proved an ineffectual leader, dominated by her Italian favourite Concino Concini. The Estates General was summoned in 1614 in the hope of restoring peace, but disputes broke out, and the meeting was quickly abandoned. As a result, fighting was resumed between the Catholics and Huguenots. Louis eventually gained power in 1617, but then had to face two armed revolts led by his mother. A fragile reconciliation between mother and son was finally achieved by her advisor, the Bishop of Luçon (Armand du Plessis de Richelieu). She returned to court and was influential in having Richelieu appointed chief minister in 1624. He became the power behind the throne for the rest of the reign and, as we shall see (1628 C1), his ruthless policy put the French monarchy well on the way to absolute rule. 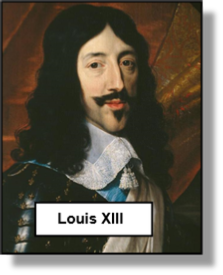 xxxxxAs we have seen, Henry of Navarre, as leader of the Huguenots, played a major role during the final stages of the French Religious Wars. Four years after coming to the throne as Henry IV in 1589, he converted to the Roman Catholic faith and, after prolonged consultation with the Huguenots, hammered out a compromise settlement which brought the religious wars to an end. This understanding, the Edict of Nantes of 1598 (L1), was only a truce, but it did at least bring about a lengthy albeit uneasy period of religious toleration. It was not until Henry was assassinated by a Catholic extremist in May 1610 that trouble broke out again, and even then it was not on the same scale as the previous conflict. 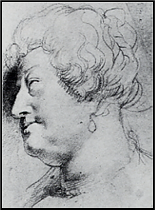 xxxxxHenry'sxson Louis was only nine when his father was murdered. During his minority his mother, Marie de Medici (illustrated) acted as regent and proved an ineffectual leader. Dominated by her Italian favourite, Concino Concini, she reversed Henry's anti-Habsburg policy and arranged the marriage of her son to Princess Anne of Austria, daughter of the Spanish king, Philip III. Meanwhile, she proved unable to keep the French nobles in check. In 1614 she summoned the Estates General in the hope of arranging a peace settlement, but the meeting broke up in disarray, and fighting broke out again between the Catholics and Huguenots.

xxxxxWhen Louis XIII reached the age of 14, his mother refused to give up the reins of government. He eventually gained power in 1617 by having Concini murdered and his mother exiled to Blois, but in 1619 and 1620 he had to suppress two further armed rebellions by her, aimed at regaining control of the country. Later, through the good offices of her advisor, the up-and-coming Bishop of Luçon, (Armand du Plessis de Richelieu), a fragile reconciliation was achieved between mother and son. She was allowed 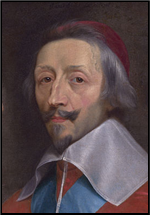 to return to court where she became instrumental in furthering Richelieu's career. It was mainly due to her influence that he was made a Cardinal in 1622, and appointed the king's chief minister in 1624.

xxxxxAs we shall see (1628 C1), the appointment of Richelieu as chief minister was to have far-reaching consequences. Throughout the remainder of Louis' reign he was to be the power behind the throne, the virtual ruler of the country, and he was far from idle during his period of office. His ruthless policy, aimed at restoring royal authority, was to put the French monarchy well on the path to absolute rule.

xxxxxIncidentally, the famous Flemish artist Rubens chronicled the life of Marie de Medici in 21 large paintings. The portrait above was one of the sketches made to assist him in this huge task.

xxxxxQuite apart from the rise of Richelieu, the reign of Louis XIII was important in respect of the Estates General, the French parliament. This had first been summoned in 1302, and was then made up of the three “estates”, the nobility, the clergy and the commoners. In fact, however, it had developed little over the years, and soon after it was summoned in 1614, during the turbulent years of Louis’ minority, disputes broke out between the three estates and the meeting was abandoned. Its next and last meeting was not until 1789 on the eve of the French Revolution. 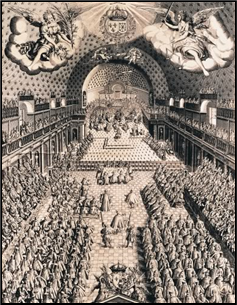 xxxxxAnd the reign of Louis XIII was also significant regarding the fate of the Estates General, the French parliament. This had first been summoned in 1302 and was made up of members from three "Estates" - the nobility, the clergy and the middle-class commoners. As an assembly, its function was seldom allowed to develop beyond an advisory capacity, and often when it was summoned it was merely to rubber-stamp financial or political support for the monarchy. When it assembled in 1614 amid the turbulent times of the minority, it perhaps had its best chance ever to impose its authority on the political life of the country. But within a matter of months disputes had broken out between the three estates, pulled apart by their conflicting interests, and the meeting was abandoned. This marked the demise of the Estates General. Its next and last meeting was not until 1789, by which time the gap between those who governed and those who were governed had become too wide to close by peaceful means. The French Revolution was the inevitable consequence. 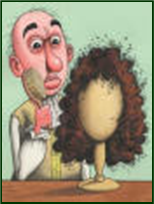 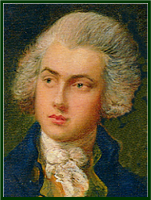 xxxxxIncidentally, the popularity of the peruke or periwig is all down to Louis XIII. He began wearing one in 1624 to conceal his baldness, and from then on it became an accepted form of dress for men - as well as a symbol of social status. It was usually made of long, human hair, curled at the sides and drawn back on the nape of the neck. Women also wore wigs - many of them highly elaborate - but they were usually reserved for special occasions (though we know that Elizabeth I often wore one). At times, they could serve as a form of identification. During the English Civil War, for example, the wigs worn by the Cavaliers were in stark contrast to the close-cropped hairstyle adopted by the Puritan "Roundheads".

xxxxxBut wigs were around long before the 17th century. The Ancient Egyptians used to shave their heads and then wear wigs as a protection against the sun - many of them plaited and interwoven with jewellery - and it is known that the Assyrians, Phoenicians, Greeks and Romans did much the same.