Kepler: by the German painter Hans von Aachen (1552-c1615) – Orlicka Galerie, Rychnov nad Kneznou, Czech Republic. Snell: by the American artist Harold Anderson (1894-1973) – published by the optical company Bausch and Lamb in 1936 to illustrate the history of the eyeglass.

xxxxxThe German mathematician and astronomer Johannes Kepler, a firm supporter of the sun-centred theory put forward by Copernicus in 1543 (H8), is best known for his three laws of planetary motion, published in his Harmonics of the World in 1619. These form the basis of our understanding of the solar system, and they greatly assisted Newton in formulating his theory of gravitational force. Then in 1625 he published his new tables of planetary motion (his Rudolphine Tables) based on work by Tycho Brahe, the Danish astronomer with whom he worked in the early 1600s. His last major treatise, Introduction to Copernican Astronomy of 1621, which included all his major discoveries, was banned by the Roman Catholic Church, but proved influential. In mathematics he developed a system of infinitesimals - the forerunner of calculus - and his Optics, written in 1604, described the workings of the human eye. One of the first writers of space fiction, in his last years he wrote Somnium (Dream) in which he describes a journey to the moon and ponders on the possibility of finding inhabitants! He published 33 works and some 20 volumes of notes. 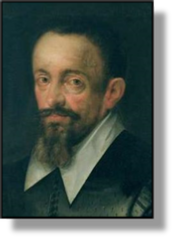 xxxxxThe German mathematician and astronomer Johannes Kepler was one of the first firm supporters of the sun-centred theory of the universe put forward by the Polish astronomer Nicolaus Copernicus in 1543 (H8). He is best known for his famous three laws on planetary motion - two published in New Astronomy in 1609, and the third in 1619 in Harmonics of the World. These form the basis of our understanding of the solar system. His greatest discovery was that the planets follow elliptical (egg-shaped) orbits and not circular ones as previous thought. These laws, breaking new ground, greatly assisted the English scientist, Sir Isaac Newton, in formulating his theory of gravitational force. And to Kepler is owed the Rudolphine Tables, published in 1625. These new tables of planetary motion, based on the observations of the Danish astronomer Tycho Brahe, gave the places of 1005 stars, and directions for locating the planets.

xxxxxKepler was born in the town of Weil der Stadt in Wurttemberg. His family was poor, but he gained a local scholarship and studied theology and the classics at Tubingen University. His original intention was to be a minister in the Lutheran Church, but such was his interest in astronomy that in 1594 he became a lecturer in this subject at the University of Graz. It was while employed here that he wrote his Cosmographic Mystery in support of the Copernican theory. Published in 1596, this treatise greatly impressed Brahe, and in 1600 he invited Kepler to be one of his assistants at his observatory at Benatek near Prague. When Brahe died the following year, Kepler succeeded him as mathematician and court astronomer to the Holy Roman Emperor Rudolph II, and thus came into possession of the 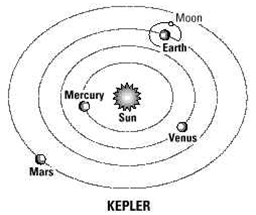 xxxxxIn 1616 he was appointed mathematician to the states of Upper Austria, and it was while living in Linz that he published his Harmonics of the World. One of his last major works, written over three years, was his Introduction to Copernican Astronomy, completed in 1621. Banned by the Roman Catholic Church, this included all his major discoveries and played a major part in winning over support for the Copernican theory.

xxxxxIn the field of mathematics he developed a system of infinitesimals which proved the forerunner of calculus, and his work entitled Optics, written in 1604, described in accurate detail the workings of the human eye. At one time he also wrote a book on astrology entitled The More Reliable Bases of Astrology, and this proved very popular. In his last years he worked on what can only be described as a work of science fiction. His Somnium (Dream), published after his death in 1634, describes a journey to the moon, and muses over the existence of lunar inhabitants. During his lifetime he published no less than 33 works, together with 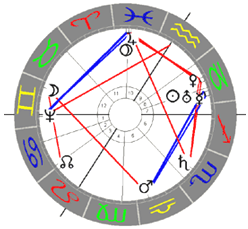 much correspondence and some 20 volumes of hand-written notes. He died and was buried at Regensburg. Because of the ravages of the Thirty Years War, his grave has never been found.

xxxxxFor the record, Kepler's three laws of planetary motion are as follows: (1) the planets travel around the Sun in elliptical orbits, one focus of the ellipse being occupied by the Sun; (2) the line joining the Sun and a planet sweeps out equal areas in equal times. In other words, the nearer a planet is to the sun, the faster it travels; (3) the squares of the periods of the planets are proportional to the cubes of their mean distances from the Sun. That means that planets nearer the sun have a shorter year than those further away from it.

xxxxxIncidentally, in 1620, when Kepler was working for the Emperor, his mother was accused of being a witch. Concerned for his mother's fate - probable torture and possible death by burning -, and doubtless a little anxious about the effect this would have upon his own standing at court, he went swiftly to her defence and, by his timely intervention, managed to have the charge dropped.

xxxxxSnell’s law also belongs to this period. Devised in 1621 by the Dutch mathematician and physicist Willebrord Snell (1580-1626), it concerned the principles governing the refraction of light and was very similar to the one published by the French mathematician Descartes in 1637. He also worked out a way of determining distances by triangulation, and by using this method made a reasonable attempt at measuring the earth’s radius. 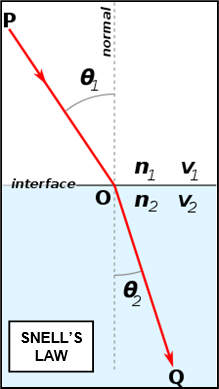 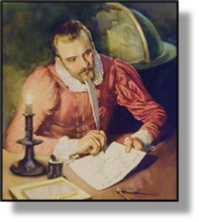 xxxxxAnother scientific law of this time was that of the Dutch mathematician and physicist Willebrord Snell (1580-1626). Snell's law, devised in 1621, concerns the principles governing the refraction of light, and it would appear that this law, expressed slightly differently, was the one published by the French mathematician Descartes in 1637.

xxxxxSnell, professor of mathematics at Leiden University, also discovered a way of determining distances by triangulation. Using a large quadrant to take readings of particular landmarks around his home - thereby building up a network of triangles - he was able to determine the distance which separated two towns on the same meridian. By using this method he made a reasonable attempt at measuring the earth's radius, but ended up making the earth 3.4 percent too small.