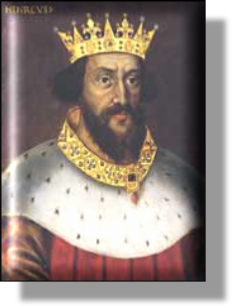 xxxxxHenry was the youngest son of William I. On learning of the death of his brother Rufus (William II), he marched straight to Winchester to seize the royal treasury, and then, without delay, had himself crowned at Westminster Abbey. He was fortunate in that his elder brother Robert was on a crusade in the Holy Land at the time. When he returned to Normandy, Henry was waiting for him and in 1106 defeated his army at the Battle of Tinchebrai - fought, incidentally on the 40th anniversary of their father's landing in England. Robert was captured and imprisoned in Cardiff Castle where, by most accounts, he lived a comfortable life until his death in 1134. However, it took another victory, this time at Brémule in 1119 against Robert's son, William Clito, and his ally Louis VI of France, before Normandy was finally secured for the English crown.

xxxxxUnlike his brother Rufus, Henry won the support of the Saxons by granting them a charter of rights (a forerunner of the Magna Carta), and by marrying Matilda, a Saxon princess. And in an impressive oath taken at his coronation he vowed "to abolish all the evil customs with which the realm of England has been unjustly oppressed." He attempted to keep his word. Furthermore, he proved an able administrator, and by introducing the idea of sending out itinerant justices to maintain law and order, he is generally regarded as the founder of the English system of justice. In addition, anxious as he was to bring in the taxes, it was Henry who instituted the Exchequer, that department of the Treasury which dealt with the collection of taxes. The name comes from the chequered board on which counters were moved about to add up the columns of figures. The man put in charge of these calculations was known as the Chancellor of the Exchequer.

xxxxxAnd, in general, relations between Church and State took a turn for the better. Fully aware of the importance of keeping on good terms with the Church leaders - they were a force that had to be reckoned with - he brought back the saintly Archbishop Anselm - exiled by his brother Rufus following a quarrel over the rights of the Church in general and the investiture of bishops in particular. At first the move was not totally successful. Within three years the dispute broke out again and Anselm was exiled for a second time. He was soon recalled, however, and in 1107 a compromise was reached. The matter did not raise its ugly head again until 1164 in the reign of his grandson Henry II.

xxxxxThusxHenry's rule gave England sound government, but any hope that this period of peace and stability would be continued were dashed in 1120 with the tragic death of his only son Prince William, drowned in the White Ship disaster. The accident happened when the ship was driven on to the rocks off Harfleur in the English Channel. The young prince got away, but it is said that he insisted on returning to the wreck to rescue his young sister and the boat he was in capsized.

xxxxxBlame for the sinking of the White Ship was put on the crew, some of whom, it was alleged, were drunk at the time. Be that as it may, the death of Prince William meant that the succession to the throne was virtually up for grabs. Henry made his barons swear allegiance to his daughter Matilda, but it was unlikely that they would support her when he was no longer around. First, and perhaps foremost, she was a woman, and secondly, she was married to the Count of Anjou, a rival on the continent and whose territory was next to Normandy. Henry feared the worst and he had good cause to do so.