xxxxxAs we have seen, Emperor Alexius I Comnenus, whose reign began in 1081, succeeded in staving off attacks from the Normans in Greece in 1083, and the Pechenegs from the Balkans in 1091 (W2). And the Crusaders, arriving in 1097, stopped the Turkish advance in Anatolia. John II Comnenus, who succeeded his father in 1118, continued the revival of the empire's fortunes by holding back the Seljuk Turks and forming an alliance with the Holy Roman Emperor to strengthen his northern borders. But recovery was not to last. Ironically, as we shall see, it was the Christians of the West who were to strike the first blow. The Fourth Crusade of 1202 (JO) turned upon the Byzantines, their fellow Christians, and sacked their capital Constantinople. It was the beginning of the end for the Christian Empire of the East.

xxxxxAs we have seen, Alexius I Comnenus became emperor in 1081, and during a reign lasting 37 years succeeded in saving his empire from a series of attacks. In 1083, with the assistance of the Venetians, he drove back a large Norman army which had invaded Greece (led by Robert Guiscard), went on to defeat the Pechenegs in 1091 (W2), a nomadic people coming from the Balkans, and, by appealing to the Pope for help, brought the Crusaders to his aid in 1097, thereby calling a halt to the Turkish advance in Anatolia. 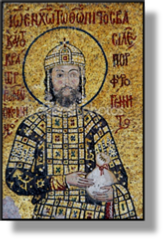 xxxxxJohn II Comnenus, who succeeded his father in 1118, continued the revival of the Empire's fortunes. An able soldier and statesman, like his father, he inflicted another defeat on the Pechenegs, and kept the Serbs and Hungarians firmly in check. And by forming an alliance with the Holy Roman Emperor at this time (Lothair II), he contained the Norman threat in southern Italy. He also made headway in the east, attacking and conquering the Armenian state of Cilicia. But his greatest success was in Anatolia, where a number of well-fought campaigns kept the Seljuk Turks from advancing further eastward and, in some cases, pushed them back.

John II: a mosaic in the museum of Hagia Sophia in Istanbul, originally a church but converted into a mosque following the Muslim capture of the city in 1453. Map (Byzantine Empire): by courtesy of Explore Byzantium – byzantium.seashell.net.nz.

THE BYZANTINE EMPIRE - A PERIOD OF REVIVAL

xxxxxBut the recovery achieved by the Emperors Alexius I and John II, plus, to some extent, their immediate successors, was not to last. Ironically, it was the Christians from Western Europe who, as we shall see, dealt the first blow to their hopes of survival. The Fourth Crusade of 1202 (JO) turned upon the Byzantines and ruthlessly sacked their capital, Constantinople. For a time they were forced into exile and, on their return, their days were clearly numbered. Beset now by Westerners, as well as by the growing might of the Ottoman Turks and serious dissension from within, their Empire was gradually reduced in size. As we shall see, there was a brief recovery under Michael VIII, the Greek Emperor of Nicaea, in 1261 (H3), but the Empire eventually fell to a powerful Turkish army in 1453 (H6). The Byzantine Empire of the Christians had given way to the Ottoman Empire of the Muslims. This time there was to be no way back. 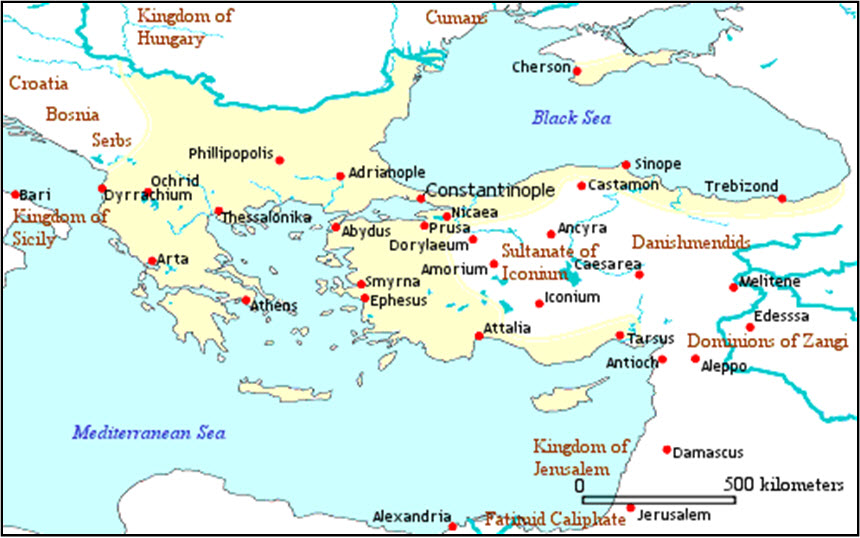