xxxxxWork on the temple Angkor Wat, one of the greatest monuments of the Khmer Empire, was begun in 1113 and took nearly 50 years to complete. The world's largest religious structure, its vast compound is 2.5 miles in circumference. The temple itself is situated on the highest of three courtyards, built upon a huge stepped pyramid and with a central tower over 200 feet high. The Khmers settled along the Mekong River in the 6th century. Their capital Angkor, established about 880, developed into a city of magnificent shrines, palaces and temples, including Angkor Wat. But hostile neighbours attacked the Empire and sacked Angkor in 1177. It fell into ruins and its remains were not discovered until 1863. As we shall see, in 1181 (H2), the Khmers recovered under Jayavarman VII and he rebuilt their capital at Angkor Thom. Their empire survived until 1434. 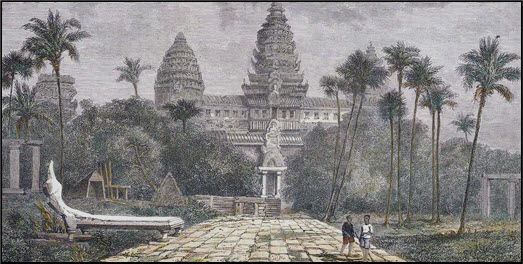 xxxxxWork on Angkor Wat (meaning the Temple of Angkor), one of the greatest monuments of the Khmer Empire, was begun in 1113 and took nearly fifty years to complete. Commissioned by the then king of Khmer, Suryavarman II, as his funeral shrine, it is regarded today as the world's largest religious structure. The temple compound is some 1,600 yards square and is surrounded by a moat about 20 yards wide and 2.5 miles in circumference. The great temple itself is situated in the highest of three courtyards, and built upon a huge stepped pyramid. A central, bell-shaped tower reaches to the sky, over 200 feet high, and four similar but smaller towers are situated at each corner of the building. The temple itself is dedicated to Visnu - the Hindu god who looks after the universe - and the entire towering complex of cloisters, terraces and galleries is elaborately sculptured with reliefs depicting the Hindu divinities and the legends and battles of Hindu mythology. 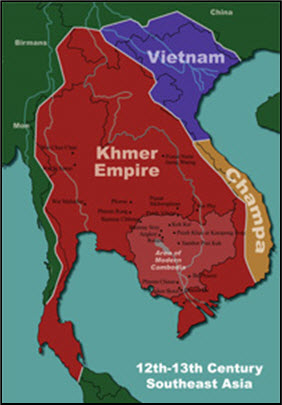 xxxxxThe Khmer Empire came into existence some time in the sixth century, the first settlements being sited along the Mekong River. In about 880 the Khmers established their capital at Angkor - situated north of Tonle Sap in what is now Kampuchea (Cambodia) in South East Asia. Over the years and a long succession of rulers, Angkor became a city of magnificent shrines, royal palaces and temples, a showpiece of Hindu architecture culminating in the building of the magnificent Angkor Wat. The Khmer rulers were regarded as Hindu gods - hence their massive temple tombs - and Angkor was their royal city. Around it they developed extensive irrigation works, used to supply a growing population with an abundant supply of rice. 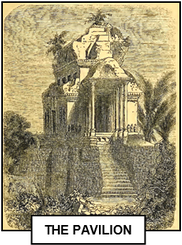 were not without enemies, and these included the Cham and the Thai. The constant incursions of the Chams from central and southern Vietnam eventually turned into an invasion. They sacked Angkor in 1177 and the temple was virtually abandoned. The old complex slowly but surely fell into ruins. Soxdense was the jungle that eventually covered these magnificent remains, that it was not until the 1850s that they were discovered by the French naturalist Henri Mouhot (1826-1861) whilst he was exploring the tributaries of the River Mekong. (The two illustrations shown here are by him.) It then became known as one of the world's most important archaeological sites.

xxxxxAs we shall see, the Khmers survived under their outstanding leader Jayavarman VII, who came to power in 1181 (H2). He rebuilt their capital on a new site nearby called Angkor Thom (Great Angkor), but in the thirteenth and fourteenth centuries constant incursions by the Thais undermined the Empire's dominance and led to its downfall in 1434.

xxxxxIncidentally, the Khmers were fierce fighters and were renowned for their use of elephants in battle. The animals were clothed in chain mail or thick bamboo, had blades fitted to their tusks, and carried two or three well-armed warriors.