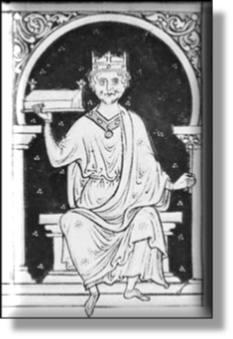 xxxxxWilliam II, the third son of William the Conqueror, came to the English throne on the death of his father. He spent a great deal of his time in Normandy seizing the land which his elder brother, Robert, had inherited. At home, he was not a popular monarch. His rule was harsh and his taxes heavy and often unjust. His constant demand for money brought him into conflict with his barons - he had to face a number of revolts - and also with the Church, particularly in the person of Archbishop Anselm. For most of his reign he regarded the Church as merely a source of income, taking for himself the revenues of vacant offices. The Anglo-Saxon Chronicle states that he was “hateful to almost all his people and odious to God”. However, as most of the chroniclers were themselves the products of the Church, this might well be seen as a somewhat biased judgment!

xxxxxIt is true, however, that he quarrelled constantly with his two brothers, Robert and Henry, and that he was ruthless in his dealing with his barons. He had many enemies and few friends, so it is perhaps not surprising that he died in mysterious circumstances while out hunting in the New Forest, that huge wooded area in Hampshire which his father had stocked with deer. He was killed by an arrow, probably more by design than accident, and his body was trundled by cart to Winchester Cathedral and buried under the main tower. The following year, so the story goes, the tower collapsed and fell on his tomb! A fitting end, many said, to a disastrous reign.

xxxxxThexman who shot the fatal arrow was one Walter Tirel, a knight whom the king had invited over from France. Whether he himself gained by the king's death is not known, but one man who did benefit from the "accident" was brother Henry. He lost no time in getting to Winchester, seizing the royal treasury (including the crown) and laying claim to the English throne.

xxxxxIt was during this reign that the Crusades began, that series of expeditions which were intended to defeat the Infidel, the Muslims, and bring the Holy Land, with its city of Jerusalem, under Christian rule. The Crusade launched in this period was successful, culminating in the capture of the Holy City, but many of the subsequent campaigns ended in total disaster.

King's brother Robert took part in the first Crusade and both his brothers benefited as a result. William was able to seize land from his Norman duchy during his absence, and Henry, upon the death of William, had time to seize the reins of government before his brother returned and attempted, unsuccessfully, to take the English throne.

xxxxxIncidentally, the spot where the king was killed in the New Forest is marked by a large stone (illustrated) and can be seen to this day. It is called the Rufus Stone because William II had red hair and was often called Rufus or William the Red. The stone is well signposted and it makes a pleasant place for a coffee stop or a picnic!