xxxxxEl Cid (meaning "Lord") is the name given to the Spanish adventurer Rodrigo Diaz de Vivar. He was a mercenary soldier who, towards the end of the 11th century, fought for both the king, Afonso VI, and the invading Arab army. Nonetheless, he later became regarded as Spain's greatest warrior and legendary hero, a notable victory being his capture of Valencia in 1094. His heroic exploits, somewhat embellished, were the subject of the Castilian epic entitled Poem of the Cid, produced about 1140. The French writer Pierre Corneille based his masterpiece Le Cid (1637) on this celebrated Spanish fighter. The struggle against the Moors was continued by Afonso I with the capture of Saragossa in 1118 (H1). 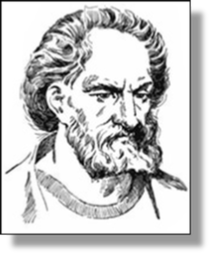 xxxxxThe Spanish adventurer Rodrigo Diaz de Vivar, today regarded as Spain's national hero, captured the Arab city of Valencia in 1094 after a siege lasting twenty months. Now generally known by the name of El Cid, he was born in Castile of a noble family and gained fame in the service of King Afonso VI while fighting against the king of Navarre. Although subsequently regarded as champion of Spanish resistance against the invading Moors, he was in fact a mercenary soldier and did at times support the Arab cause. Indeed, it was while in the service of the Moslem rulers of Saragossa that his fighting ability earned him the title of El Cid - from the Arabic word Sid meaning Lord.

xxxxxHe was exiled from Castile in 1081 - unjustly it would seem - and served a number of rulers before advancing on Valencia, a city which had been in the hands of the Moors since 714. The ruler of the city, al Kadir, had been killed by rebels and El Cid seized the opportunity. After a long siege he took the stronghold and ruled it until his death five years later. The city was then abandoned to the Moors and was not recaptured by the Spanish until 1238. As we shall see, however, the fight against the Moors was continued by Afonso I of Aragon and Navarre. His capture of Saragossa in 1118 (H1) was to prove a serious blow to the Almoravids, the Arab masters of much of Spain. 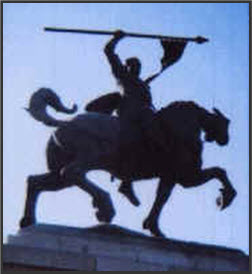 xxxxxAs one might expect in the period of Spanish history known as the Reconquista, a number of heroes have emerged, but none more celebrated than El Cid, Spain's greatest warrior and legendary hero. He was clearly an accomplished soldier, but his exploits have doubtless been embellished and romanticised, particularly by the stories and poems of his time. And, like all good legendary heroes, he had a famous horse, named Babieca. When as a lad he chose a skinny white colt his godfather - so the story goes - called him a fool. This was the name he gave to his horse which, needless to say, grew into a powerful charger and carried him to many a victory in battle.

xxxxxMuch of his present-day reputation, however, dates from the Spanish Civil War of 1936 to 1939 when the Nationalist Party exploited the legend by likening their leader Franco to a latter-day El Cid, a military hero fighting for the re-conquest of Spain. Such a tactic was helped by the fact that Valencia, the scene of El Cid's greatest triumph, was the loyalist capital during that conflict.

xxxxxThe heroic exploits of this Spanish warrior formed the subject matter of the Castilian epic entitled Poem of the Cid, produced about 1140 and fairly factual in content. Theyxlater provided the material for Pierre Corneille's major work, Le Cid (1637), itself based on a work by the Spanish dramatist Guillén de Castro y Bellvis entitled The Youthful Deeds of the Cid, published in 1618. And, needless to say, in 1961 they featured in a film starring Hollywood strong man Charlton Heston.