THE BYZANTINE EMPIRE - A PERIOD OF REVIVAL

xxxxxWhen Rome fell to the barbarians in 476, it was the Byzantine Empire, controlled from its capital Constantinople, that took on the defence of the Christian world. It was to prove an uphill struggle. By the 7th Century the Persians were threatening the eastern provinces, and the Muslim Arabs were beginning raids upon Asia Minor. Then the Seljuk Turks arrived on the scene. As we have seen, they defeated the Byzantines at the Battle of Manzikert in 1071 (W1) and, sweeping into Anatolia, threatened Constantinople. Thus when Alexius I Comnenus came to the throne in 1081, the future of the empire was in doubt, further endangered by attacks upon Illyria by the Normans (based in southern Italy under the command of Robert Guiscard) and the incursions into parts of the Balkans by the Pechenegs, a nomadic people. With the help of the Venetians, however, he repelled the Normans in 1083 and defeated the Pechenegs in 1091, and, by appealing to the Pope, brought the Crusaders to his aid in 1097, thereby calling a halt to the Turkish advance. The so-called Comnenian Restoration was under way and, as we shall see, was continued by Alexius’ successor John II Comnenus in 1118 (H1). 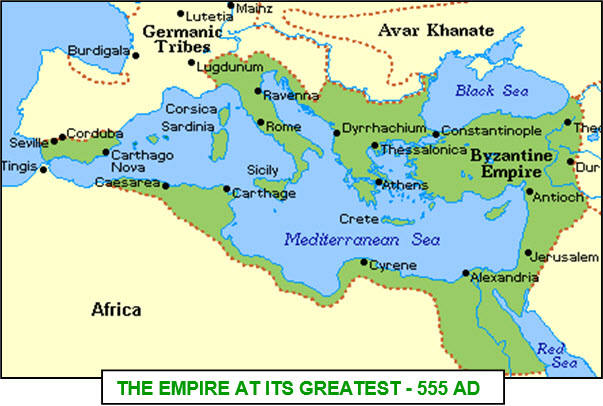 xxxxxIt was in 330 that the Roman Emperor Constantine, the first Christian emperor, moved his capital to the city of Byzantium, re-named Constantinople in his honour (and today known as Istanbul in Turkey). When Rome fell to the barbarian invasions in 476 it was the Byzantine Empire - then controlling vast areas of Eastern Europe, the Middle East and North Africa - which took on the defence of the Christian world. This it did with varying degrees of success and failure over the next one thousand years.

xxxxxIt was to prove, in fact, a struggle against the odds. By the early part of the fifth century the Germans had taken over most of the western half of the empire, and by 476 they had occupied much of Italy, though some areas were later regained. Then early in the seventh century the Persians began threatening the eastern provinces, and the Muslim Arabs, having moved into Palestine, Syria and Egypt, began raiding Anatolia (Asia Minor). Some land was regained in the tenth century, but the Balkan peninsula soon became a battle ground against the Slaves and Bulgarians. Then at the beginning of the eleventh century came the Seljuk Turks. As we have seen, following their victory over the Byzantine army at the Battle of Manzikert in 1071 (W1), they swept into Anatolia. Constantinople was now under serious threat.

xxxxxThus when Emperor Alexius I Comnenus came to throne in 1081 the fortunes of the Byzantine Empire were at a low ebb. Indeed, the very survival of the empire was in doubt, threatened as it was on all sides. Whilst the Seljuk Turks were strengthening their hold on Anatolia, the Normans, based in southern Italy under their leader Robert Guiscard, were invading Illyria with a sizeable army of 30,000, and the Pechenegs, a nomadic people from Eastern Europe, were spreading out from the Balkans.

xxxxxThe Normans proved the greatest threat. Having laid siege to Dyrrhachium, the capital and chief port of Illyria, they captured the city after defeating Alexius at the close-run Battle of Durazzo in October 1081. Their fleet of 150 ships was badly damaged by the Venetian navy - then supporting the Byzantine cause - but on land the Normans then went on to capture most of northern Greece. At Kastoria, however, Robert learnt that the Holy Roman Emperor Henry IV was at the gates of Rome and threatening his ally, Pope Gregory VII. He returned to Italy without delay, leaving his son, Bohemond, in charge of the army. He defeated Alexius in two battles (those close to Loannina and Arta) but was himself defeated following the siege of Kastoria in October 1083, and hastily took the remnants of his army back to Italy. The following year his father returned to make a second attempt to take over the Byzantine Empire, but having taken Corfu, he died of a fever - along with 500 of his men - on the island of Kefalonia in July 1085. 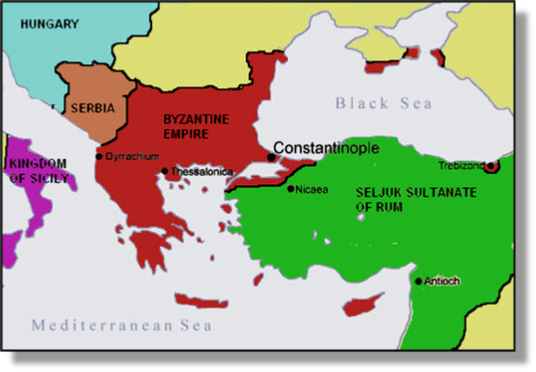 xxxxxMeanwhile, as we shall see, Alexius’ appeal to the West brought the Crusaders to Constantinople in 1097, and a halt to the Turkish advance. With their support he regained the coastal regions of Anatolia. Meanwhile in 1091 he took on the Pechenegs and roundly defeated them. The Byzantine Empire was regaining something of its former power and prestige, and Constantinople was coming to be seen as the capital of the world. The map shows the extent of the Byzantine Empire around the year 1081. As we shall see, this “Comnenian Restoration” was to be continued by his successor, his son John II Comnenus, when he came to the throne in 1118 (H1).

the reign of Alexius I, quite apart from the military success achieved, also gained a well-earned reputation for its revival in Byzantine art, rich in mosaics, icon painting and gold adornment. Craftsmen in these exacting skills were busy abroad, their labours including work at St. Mark's basilica in Venice, the abbey of Monte Cassino, Salerno cathedral and a church in Daphne, near Athens.