xxxxxThe Holy Land had been occupied by Arab Muslims since the seventh century but, over the years, they had shown a remarkable degree of tolerance towards the thousands of Christian pilgrims who made their way to Jerusalem each year. Towards the end of the eleventh century, however, all this changed. Ardent Muslims known as Seljuk Turks moved southwards into Asia Minor and, defeating the Byzantines at the Battle of Manzikert in 1071 (W1), moved into Palestine and took control of Jerusalem. Christians were ill-treated and their pilgrim routes blocked. The Byzantine emperor, Alexius I Comnenus, fearing that Constantinople would be their next target, sought help from Pope Urban II. He called the Council of Clermont in 1095 and thousands responded to the call for a Crusade to capture the city of Jerusalem. The first force, the People's Crusade was badly led and ended in failure, but the second, led by many European princes - including Robert Duke of Normandy, son of William the Conqueror - arrived at Constantinople in 1097, ready for battle. In 1099, amid great rejoicing, it took the Holy City and set up the Kingdom of Jerusalem. But, as we shall see (1147 ST), this Crusade was to be but the first of the many. 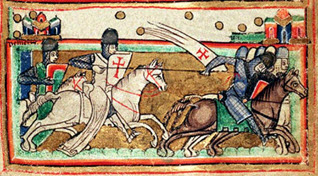 xxxxxThe Arab Muslims had occupied the Holy Land since the seventh century when the followers of Islam had conquered the Middle East, swept along the north coast of Africa, and invaded southern Europe by way of Spain and Sicily. Over the years, however, they had shown a great deal of tolerance towards the thousands of Christian pilgrims who each year flooded into Palestine and made their way to Jerusalem, the holy city where their Saviour had been crucified and, according to their faith, had risen from the dead. Such tolerance may well have been motivated in part by the large income the Arabs received from the feeding and housing of these visitors, but it was nonetheless commendable.

xxxxxTowards the end of the eleventh century, however, all this changed. The Seljuk Turks, ardent Muslims, began to move southwards into Asia Minor. In 1071 (W1), they defeated the Byzantines at the Battle of Manzikert and, sweeping into Palestine, overpowered the Saracens and took control of Jerusalem. Thenxin 1085, under their leader Malik Shah, they sei 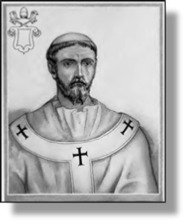 zed the port of Antioch and began blocking the routes whereby Christians made their way to the Holy City. Pilgrims themselves were ill-treated and made to pay extortionate prices for their survival. In addition, such was the threat to Constantinople, the capital of the Byzantine Empire, that the Emperor, Alexius I Comnenus, sent an urgent plea for help, indeed deliverance, to the Pope at Rome. Pope Urban II (illustrated) responded at once. Atxthe Council of Clermont in 1095 he called for a crusade to recover Palestine from the Muslims and to support the Christian Byzantine Empire in its struggle against the Infidel.

xxxxxThe Pope's plea for armed intervention aroused a colossal response. People from all walks of life flocked to the banner of Christ, bearing the red cross which symbolised the crucified Christ and - from the Latin word for cross, crux - gave meaning to the word "Crusade". Many of these people were genuinely motivated by religious fervour, particularly as the Pope had held out the promise of heaven to all those who died in the cause, and a pardoning of sins (indulgence) to all those who took part. Others - particular those from the emerging city-states in Italy - were anxious to open up new trade routes with the Middle East; whilst a considerable number of the more wealthy, noble participants were seeking adventure, political status and the booty that might go with it. 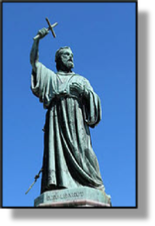 xxxxxThe Crusade was made up of two forces. The first was nothing short of a rabble and came to be known as the People's Crusade. Little prepared, if at all, for the long journey they faced and the enemy they were to meet, this mob was mostly made up of peasants and vagabonds who had never been outside their feudal homesteads but had been persuaded to take up arms - what arms they had - by the eloquence of their leader Peter the Hermit (illustrated), a wandering preacher who claimed to speak with the voice of God. Laterxthey were joined by another wild horde led by a man known as Walter the Penniless. Thousands perished during the long, arduous journey across Europe, mostly from hunger, exposure or disease. And, on arrival in Anatolia, the remainder were cut to pieces almost to a man by the Turkish forces, most of them at a battle near Civetot.

xxxxxThexsecond force was a well organised army by the standards of the day, well equipped and led by many European princes, including Robert Duke of Normandy, son of William the Conqueror, and Godfrey de Bouillon, Duke of Lower Lorraine. It arrived at Constantinople in 1097 and was soon embarked on a series of savage battles. It took Antioch in 1098, and then in July of the following year, after a siege lasting a month, captured its greatest prize, the Holy City of Jerusalem. A new kingdom was formed known as the Kingdom of Jerusalem and Duke Godfrey became its first leader with the title Defender of the Holy Sepulchre. It must then have seemed that the battle against the Infidel was over, but, in fact, as we shall see (1147 ST), this Crusade was to be but the first of many despatched over the next 200 years. The Saracens were not to be that easily dislodged from the Christian lands of the Middle East and their own sacred city of Jerusalem.

Crusade: medieval illustration, artist unknown. Urban II: illustration from The Lives and Times of the Popes by the French diplomat and historian Artaud de Montor (1772-1849), published in 1842, artist unknown. Peter the Hermit: statue erected at Amiens in 1854, the work of the French sculptor Gédéon de Forceville (1799-1886). Illustration by the Belgian photographer Jean-Pol Grandmont. Map (Crusades): by courtesy of mrbrunken.happykidsschool.com. Torquato Tasso by the Italian artist Alessandro Allori (1535-1607) – Uffizi Gallery, Florence. 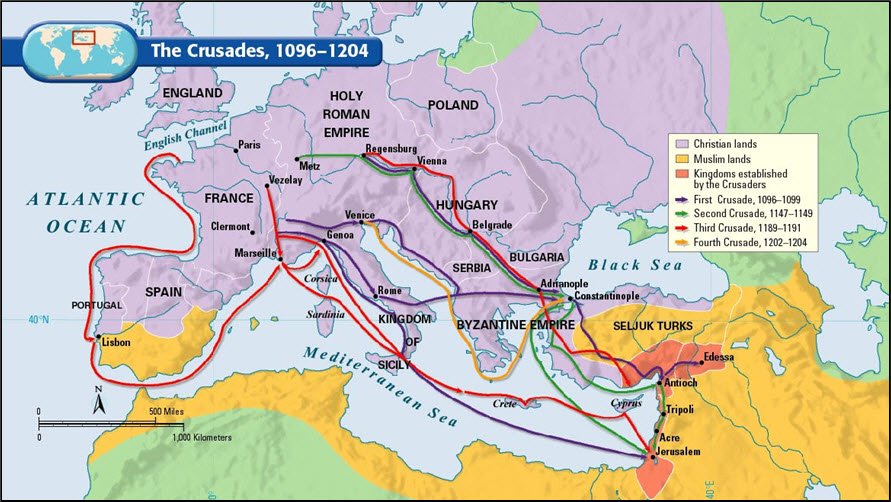 xxxxxIncidentally, In 1574 the Italian Renaissance poet Torquato Tasso wrote a romantic epic poem about the First Crusade and the capture of Jerusalem. Entitled Gerusalemme Liberata (Jerusalem Delivered), the first edition was published in 1581.