xxxxxThe Chanson de Roland is the best known of a group of poems known as Chansons de geste (Songs of heroic deeds). Produced in 1095, it tells the tale of Roland, nephew of Emperor Charlemagne, who together with a band of worthy knights, are killed fighting a gallant rearguard action against a large force of Saracens at Roncesvalles, a narrow pass in the Pyrenees. Loosely based on a battle of 778, this deed of valour provided good patriotic material for the wandering minstrel. 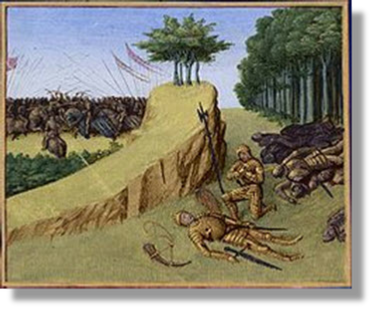 xxxxxThe Chanson de Roland, the most famous of a group of some 80 surviving poems known collectively as Chansons de geste (Songs of heroic deeds), tells the story of our hero, Roland, nephew of Emperor Charlemagne. He, together with his friend Oliver and other worthy knights, are all killed fighting a gallant rearguard action against a large force of Saracens at Roncesvalles (here illustrated), a narrow pass in the Pyrenees. Shown here is the death of Roland himself. Like all of these poems, handed down by oral tradition or perhaps composed by poets at a much later date, this chanson is a heavy mixture of fact and fiction. It is probably based on a battle in 778 when Hruodland, one of Charlemagne's generals, was ambushed by the Basques and acquitted himself well. The poem, produced in 1095, might also be classed under the Geste du Roi, a group of medieval poems centred around the adventures of Charlemagne and his knights.

xxxxxBecause of their unreliable source, these poems have little value historically, but they all played a part - and the Chanson de Roland above all - in contributing to a gradual awakening of a French national spirit. Highly patriotic and always extolling the virtues of the "good guy", they provided ideal material for the wandering jongleurs, those minstrels who wandered from court to court and, as part of their entertainment, sang chansons de geste, as well as love songs composed by troubadours, the poet-musicians of southern France.