xxxxxThe French scholar Abelard opened a theological school in Paris in 1113, and became canon of Notre Dame de Paris in 1115. He was a brilliant teacher and theologian, and was prepared to question the narrow, orthodox views of the church leaders of his day. His controversial views on the atonement brought him into conflict with Bernard de Clairvaux of the Cistercian Order and he was twice cited for heresy, but never tried. His love affair with his pupil Heloise, whom he secretly married and by whom he had a son, was the scandal of the age. He was castrated and spent the rest of his life as a Benedictine monk. She was sent to a convent. Details of the romance are included in his autobiography The History of My Misfortunes. He wrote to her regularly throughout his life, and they were reunited in death. 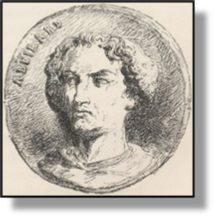 xxxxxBorn near Nantes, the French scholar Abelard opened a theological school in Paris in 1113, and became canon of Notre Dame de Paris in 1115. By this time he had gained an enviable reputation for his teaching of logic and theology. However, following his love affair with one of his pupils, Heloise (whom he secretly married and by whom he had a son), he was publicly disgraced. He was castrated at the instigation of one Canon Fulbert, an uncle of Heloise, and spent the rest of his life as a Benedictine monk, ending up as abbot of a monastery in Brittany.

xxxxxHis controversial views on the atonement and the Trinity, in which he stressed the importance of reason in religious faith, brought him into conflict with Bernard de Clairvaux of the Cistercian Order. As a result he was twice cited for heresy, first at the Council of Soissons in 1121 and then at the Council of Sens in 1140. On the first occasion he took refuge at Nogent near Troyes, where he built a convent called the Paraclete and resumed his role as a teacher. On the second, he set out for Rome to defend himself but only made it as far as Cluny. Here, through the good offices of the abbot, Peter the Venerable, some measure of reconciliation was achieved between Abelard and Bernard. It was not a moment too soon. Abelard died in 1142 while staying at the priory of Saint-Marcel-sur-Saone near Cluny. He was buried at the Paraclete and, on her death in 1164, Heloise was buried beside him. Finally, in 1817 their remains were taken to the Père Lachaise cemetery in Paris. 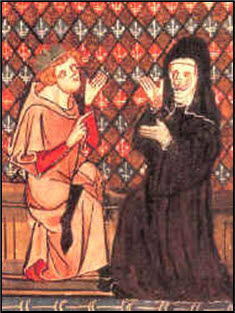 xxxxxHis romantic affair with Heloise caused a medieval scandal - as one might well imagine - and details of this liaison are included in his autobiographical work The History of My Misfortunes. His personal life aside, Abelard was a brilliant teacher and theologian, and his willingness to question the narrow, orthodox views of Church leaders at this time did much to encourage a wider interest in theological debate.

xxxxxAs for Heloise, having been sent to a convent when the scandal broke, she also became a teacher and was eventually appointed abbess of the Paraclete, the convent which Abelard had built in 1125. We are told that throughout his life Abelard wrote regularly to Heloise, his first and abiding love.

xxxxxIncidentally, the poem Eloisa to Abelard, the work of the English poet Alexander Pope in 1717, is written as though from Heloise while in her convent.