xxxxxSuch was the bitterness between Church and State over the investiture controversy, that in 1111 Henry V of Germany took the matter into his own hands, kidnapped the pope, Paschall II, and forced him to give way on every point! Once released, however, the pope withdrew his concessions and the struggle continued. Eventually in 1119 talks were reopened between the king and the pope and an agreement was hammered out at the Council of Worms three years later in 1122. But, as we shall see (1164 H2), in England the controversy still had time to run.

xxxxxLike his father before him, Henry V of Germany continued the bitter struggle with the papacy over the respective rights of Church and State when senior clergy were appointed. In 1075 (W1), as we have seen, his father, Henry IV, had gone so far as to storm Rome and have his own "antipope", Clement III, crowned at St. Peter's Basilica.

xxxxxHenryxV, who came to the German throne in 1106, went one step further in his dispute with the papacy. In 1111, during negotiations with the pope, Paschall II, he kidnapped him and forced him to accept his right, as a monarch, to appoint senior clerics and grant them their symbols of office. And, making the most of his opportunity, Henry also made the pope crown him Emperor of the Holy Roman Empire (HRE), a title claimed by German kings since 962. 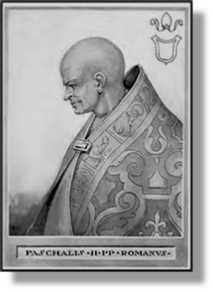 xxxxxNeedless to say, once the pope was released he cancelled his concessions, made under duress, and the struggle continued. But the end was in sight. Henry faced a serious revolt from his nobles at home and after his forces were defeated in 1115 he returned to Rome. Here (again like his father) he installed an antipope, Gregory VIII, but with the specific aim of bringing pressure to bear on the new pope, Callistus II. Henry wanted a settlement and he was prepared to give as well as take. Talks with the pope began in 1119 and, following a format worked out in other countries - notably the compromise reached in England between Henry I and Anselm (the so-called Compromise of Le Bec) - an agreement, as we shall see, was hammered out at the Council of Worms in 1122.

xxxxxThus came to an end this particular struggle between pope and German emperors, a struggle which lasted for some fifty years and centred around the respective powers of Church and State. However in England, as we shall see (1164 H2), the dispute still had some time to run.

Pope Paschall II: illustration from The Life and Times of the Popes by the French diplomat and historian Chevalier Artaud de Montor, (1772-1849), published 1842, artist unknown.