xxxxxAs we have seen, Anselm was appointed Archbishop of Canterbury in 1093 (W2), but quickly fell out with William II over the investiture controversy. Henry I, anxious to have the Church on his side, reinstated him in 1100, but in 1103 Anselm was again sent into exile following yet another heated dispute over the question of investiture. However, in 1106 the "Compromise of Le Bec" was reached whereby the king gave up his right to invest Bishops, but, in return, received the homage of those bishops he had himself invested. It was a shaky agreement, but it lasted out the reign. Indeed, it was not until 1164, under Henry II, that controversy raised its ugly head again, this time with dire consequences. 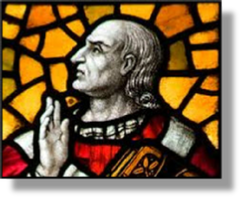 xxxxxAnselm was born in Piedmont. At the age of 23 he crossed into France and attended the Benedictine school at Bec in Normandy, then an important centre of learning under the direction of the theologian Lanfranc. He was appointed abbot in 1078, and further advanced the reputation of Bec as an outstanding place of scholarship. As we have seen, in 1093 (W2) he was appointed Archbishop of Canterbury - a post he took up reluctantly - and was soon in serious dispute with the King over the investiture controversy. Eventually in 1097 he managed to get away on a visit to Rome and no sooner had he gone than William II seized all the revenues of Canterbury. The break between king and archbishop was final. 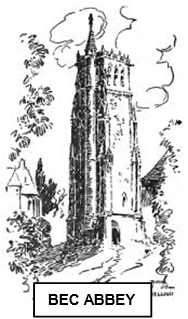 n Henry I came to the throne in 1100, following the sudden death of his brother William Rufus, he was determined to mend fences. The Church was a vast landowner and its leaders were educated and influential. He needed them on his side. He was quick, therefore, to reinstate Anselm and for about three years there was no serious disagreement. Then the old hot potato as to who should have the right to appoint and invest bishops with their authority came to the surface once again. A heated quarrel ensued and in 1103 Henry put on a show of strength by sending Anselm into exile yet again. Anselm went straight to Rome and got the Pope to excommunicate a number of bishops who had been invested by the King without Church authority. The outlook seemed bleak. However, in 1106 a compromise was reached (known as the Compromise of le Bec) whereby the king gave up his right to invest bishops with their ring and staff - symbols of their spiritual power - but, in return, received the homage of the new bishops for the land they acquired. As a settlement it left plenty of room for further dispute, but it was workable. For the moment, given good will on both sides, it was an understanding in which neither side lost face. Indeed, it was not until 1164, in the reign of Henry's grandfather Henry II, that the investiture controversy again raised its ugly head, but when it did so the consequences were much more serious and far-reaching. 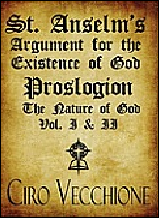 xxxxxAs noted earlier, this bitter controversy between church and state, important though it was, must not be allowed to overshadow the immense contribution made by Anselm in both philosophy and theology. Indeed, he may be regarded as one of the great intellectuals of the Christian faith and certainly the most brilliant theologian and philosopher of his day. Among his works are Why did God become Man (1098), dealing with the subject of the atonement, and his Proslogion, an influential treatise in which he puts forward the ontological argument that if man is able to conceive of a perfect being then this notion cannot exist only in the mind but must find perfection in reality. Such works earned him a European reputation.