xxxxxThe loss of Saragossa to King Alfonso I in 1118 was a serious blow to the Almoravids, the masters of Muslim Spain. It marked the beginning of their decline. Their hold on their Spanish territory was already beginning to weaken by this time. Furthermore, as we shall see, by 1147 (ST) their power base in Morocco was being threatened by the Almohads, a more fanatical people, who were preparing to take their place in the Muslim scramble for Spain. 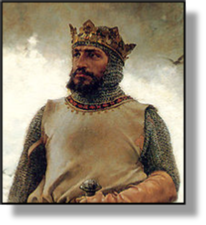 xxxxxKing Alfonso I of Aragon and Navarre (illustrated) succeeded his father Sancho in 1104 and, following the exploits of El Cid - who had captured Valencia in 1094 - spent almost his entire reign in military campaigns against the Moors. The recapture of Saragossa in 1118 after four years of continual combat was probably the highlight of his career, but seven years later he led a raid deep into Andalusia and reached as far as Granada. "The Battler", as he was aptly called, died fighting, being fatally wounded at the Battle of Fraga in 1134. 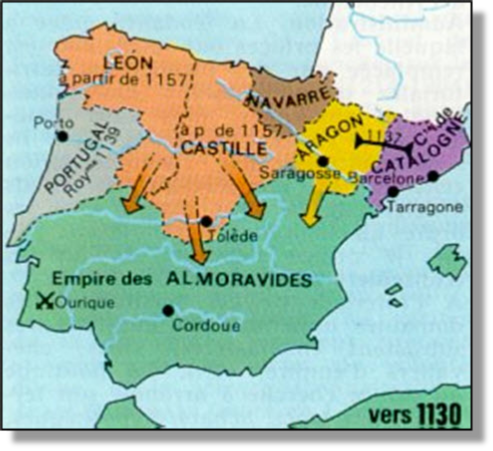 xxxxxThe loss of Saragossa was a serious blow to the Almoravids - the Berber dynasty which had crossed into Spain in 1086 (W1) and become masters of Muslim Spain by 1110. Despite their victory over King Alfonso at the Battle of Fraga in 1134 their rule was in decline. There was a serious threat to their power base in Morocco, whilst in Spain their hold on their territory was beginning to weaken. Their soldiers preferred the easy life, and the regime itself was running into serious financial problems. And, as we shall see, by 1147 (ST) their authority in North Africa was being seriously challenged by another, more fanatical nomadic people called the Almohads, and it was these who, in the course of time, were to become the new masters of Muslim Spain.