xxxxxAfter the first crusade had captured the Holy City in 1099 (W2) and set up the Kingdom of Jerusalem, there arose a serious need to defend the new territory and extend its boundaries where possible. Support came readily from the Orders of Knights. These had been founded to meet various needs and they now turned their energies to the defence of the kingdom. The Knights Hospitallers of St. John of Jerusalem had been formed to care for sick pilgrims, but in 1113 took up arms to defend the kingdom. After they were driven out of the Holy Land in 1291, they served for many years in Cyprus, Rhodes and Malta where, as we shall see, they gained fame for the defence of the island against the Muslim Turks in 1565 (L1). The Knights Templar were created in 1119 to protect the road from Jerusalem to the coast, the route taken by the pilgrims. Distinct in their white cloak with a red cross, they were responsible only to the Pope and they played a prominent part in later crusades. However, although based on strict rules of obedience, poverty and chastity, the movement grew powerful and rich and, as we shall see, in 1312 (E2) this led to their downfall. There was also the later Order, the Teutonic Knights, formed during the third crusade in 1189 (R1). It was similar in format to the other two orders, but was restricted to German nobles and spent the majority of its time defending the Catholic faith in northern Europe.

xxxxxAs we have seen, the First Crusade, launched in the reign of William II in 1095, proved highly successful. Jerusalem was taken from the Turks in 1099 (W2), and the Latin Empire of Jerusalem was established in the same year, its main aim being to extend its authority over all of Palestine. To accomplish this it needed to capture those coastal towns which had been by-passed by the Crusaders in their dash to reach and take the Holy City. Over the next few years they succeeded in this task. With naval help from Venice, Pisa and Genoa, Acre was taken in 1104 followed by Tripoli and Beirut five years later.

xxxxxBut despite such a promising start, it soon became clear that the Turks were re-grouping. They had no intention of leaving the Crusaders in charge of Palestine in general and Jerusalem in particular - a holy city to the Muslims as well as to the Christians. To meet this challenge more soldiers were 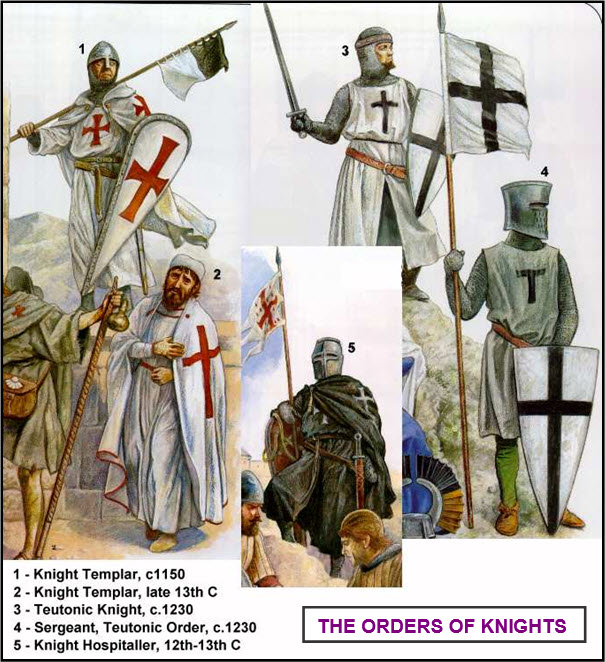 needed. Many were recruited from the thousands of pilgrims who flocked to Jerusalem each year, but another source of manpower was the Orders of Knights that were founded in the Holy Land at this time. The two most famous Orders were the Knights Hospitaller (Hospitallers) and the Knights Templar. (Templars).

xxxxxThe Knights Hospitallers of St. John of Jerusalem, the oldest order, was named after the hospital which had been established in the city to care for sick pilgrims. It was founded with this nursing task in mind, but in 1113 these Knights, like the Knights Templar, resolved to fight in the defence of the Latin Kingdom of Jerusalem. After being driven from the Holy Land in 1291, they served for many years in Cyprus and Rhodes, and then moved to Malta, where, as we shall see (1565 L1) they gained a reputation for courage in defending the island against the Muslim Turks. Malta was eventually occupied by Napoleon in 1798. The Order then went into decline, but was reconstituted in 1879 as the Sovereign Order of the Knights of Malta. Today it is employed in charity and medical work.

xxxxxThe duty of the Knights Templar, a religious and military Order created in 1119, was to protect the road that ran from Jerusalem to the coast so that pilgrims could travel in safety. Their headquarters, given to them by King Baldwin II, was situated on the site of the Temple of Solomon and this is how they derived their name. The order was founded by two French monks, Hugh of Payens and Geoffrey of St. Omer (both former knights), and it was Bernard of Clairvaux who drew up the order's strict rules based on obedience, poverty and chastity. The Templars were governed under a grand master and general council and were directly and only responsible to the Pope. Wearing a white cloak with a red cross, they developed into a powerful and wealthy Order, their riches coming mainly from the gifts of kings and nobles. Thus endowed, the Order played a prominent role in future Crusades, but, as we shall see (1312 E2), their success and the wealth that went with it was to prove their downfall in the early years of the fourteenth century.

xxxxxLater, in the reign of Richard I, another Order, the Teutonic Knights of Saint Mary's Hospital at Jerusalem, was formed during the Third Crusade in 1189 (R1). Recognised by the Pope in 1199, membership was restricted to German nobles, but its format was similar to that of the Knights Templar and Hospitaller. The vast majority of its work was carried out in northern Europe. The movement was dissolved by Napoleon in 1809, but was fully restored in 1929 as a charitable and nursing order and as such it exists today.

Incidentally, mention is made above of the Templars wearing a white cloak with a red cross upon it. These cloaks or surcoats were worn to keep the sun off their armour and they provided a ready means of identifying the Order of Knights to which the wearer belonged. These symbols became known as coats of arms and, according to some sources, mark the beginning of European heraldry as we know it today.

THE ORDERS OF KNIGHTS  (H1)