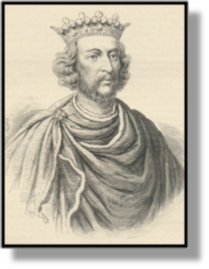 xxxxxHenry was nine years old when his father died. A regency of barons and churchmen ruled the country until he came of age in 1227. At the commencement of the reign much of eastern England remained under the control of a group of rebel barons led by the heir to the French throne, Prince Louis. By 1217, however, the rebels had been routed and Louis had been forced out of the country following the defeat of a French invasion force.

xxxxxOnce in power Henry did little if anything to give England the peace and stability it so badly needed. He raised taxes in a vain attempt to regain the lost lands in France, was over-generous to foreign favourites, and - doubtless with his father's troubles in mind - was openly subservient to the papacy. He did not include the barons in any major decision making, preferring a few close advisors, often French friends or relatives of his wife or mother. In 1258 the barons, alarmed at a costly and ill-considered scheme by Henry to put his second son, Edmund, on the throne of Sicily, compelled him to accept a series of reforms, known as the Provisions of Oxford. These provided for the setting up of a privy council to advise on policy and to oversee all aspects of administration. In 1261, however, Henry renounced these provisions and, three years later, was supported by Louis IX of France by what was known as the Mise (Statement) of Amiens. This proved the final straw: civil war was inevitable.

xxxxxIn his earlier troubles at home Henry could always depend upon one of his favourites, the powerful and ambitious French nobleman Simon de Montfort (son of the Montfort who had led the Albigensian Crusade). He came to England to claim the earldom of Leicester, once held by his grandmother, and quickly climbed the social ladder by marrying Henry's sister, Eleanor. As time passed, however, he had a number of violent quarrels with his friend and brother-in-law, and in 1263, following the Mise of Amiens, threw in his lot with his fellow barons and led a rebellion against the king. 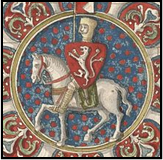 xxxxxIn the ensuing civil war, the barons defeated Henry at the Battle of Lewes in 1264 and both he and his son Edward were imprisoned. Montfort at once assumed power as a sort of constitutional monarchy and, in 1265, summoned a parliament in which, for the first time, towns were represented. In taking this action, he was probably motivated by the need to widen his support rather than by any genuine desire at constitutional reform, but whatever his motives, his experiment, though significant, was short-lived. Henry's son, Prince Edward, having escaped, raised an army against “the traitor” and Montfort was defeated and killed at the Battle of Evesham. Henry regained his throne but, being infirm and senile, it was Edward who took over the reins of government.

xxxxxHenry's ventures outside of England fared no better. Expeditions to France to regain the lands lost by his father proved extremely costly and unsuccessful. In 1230 he landed in Brittany but later withdrew his forces without swinging a sword in anger. Then in 1242 he took a more powerful force to the continent but, following a skirmish at the bridge of Taillebourg, Royan, he conceded defeat and once again turned for home. In 1259 he paid the price for failure. At the Treaty of Paris he retained the Duchy of Guyenne but, in return, was obliged to renounce claims to any other territories in France and to acknowledge that he was a vassal of the King of France, Louis IX.

xxxxxHenry's troubled reign came to an end with his death in November 1272, though as noted earlier, he had taken little part in the government of the country since regaining his throne in 1265. He was succeeded by his able son, Edward I.

xxxxxIncidentally, many of the details known about this period are due to an English Benedictine monk called Matthew Paris (d.1259). He knew many leading figures of the day, including the king himself. For many years a member of the Abbey of St. Albans, he carefully recorded contemporary events over a period of some twenty-five years (1235 to 1259) and his History of the English was therefore a mine of information. He also wrote a detailed history of the monastery of St. Albans, as well as biographies on a number of historical figures, including Edward the Confessor, Thomas Becket and Stephen Langton. (Below the picture of Mary and Child, Paris has drawn in his own figure, kneeling at her feet.)