xxxxxMarco Polo was born in Venice. In 1260 his father and uncle made a journey to the Court of Kublai Khan in China. They were well received and returned after a three-year stay. In 1271 they made a second journey, this time accompanied by Marco, then about 17. On arrival he quickly learned Mongolian and became employed in the Emperor’s service as a counsellor and roving ambassador. The three men returned in 1292 and gave accounts of their stay and travels, Marco becoming known as “Marco Millione”, the man with a million stories. Three years later, fighting for Venice, Marco was captured and imprisoned by the Genoese. It was then that he dictated his life adventures to his cell mate Rustichello of Pisa. When they were released, the manuscript was published and The Travels of Marco Polo made Marco famous in his old age, spent comfortably in Venice. The book itself, made into several copies, doubtless contained some inaccuracies, but it was a valuable contribution to the geographical knowledge of the time. Furthermore, it helped to expel some of the myths and fanciful legends then current about the lands and people of the Far East, and it awakened interest in that area. 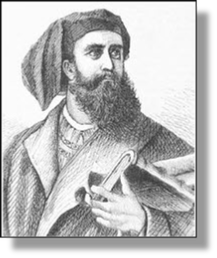 xxxxxMarco Polo, the merchant and adventurer who was destined to become one of the world's greatest travellers, was born, it is believed, in Venice in about 1254. The work based on his travels, Il Milione or, in English, The Travels of Marco Polo, became a geographical classic, though it was not without its critics regarding the matter of accuracy.

xxxxxLittle is known about his early life. In 1260, when he was about six, his father, Nicolo, and his uncle, Maffeo, both successful Venetian merchants, set out on an overland journey to China. They crossed the arid plains of central Asia and eventually arrived at the court of Kublai Khan at Cambulac (present day Beijing) in 1264. They were the first European visitors to these distant parts, but they were treated well, and the Emperor showed great interest in their land, culture and religion. When, after a three-year stay, they made their return journey, they were asked by Kublai Khan to return with missionaries so that his people could be taught the Christian faith. 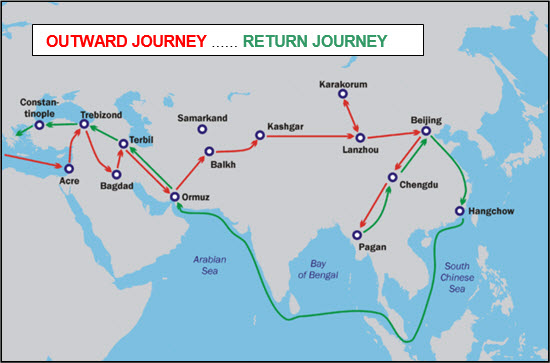 xxxxxTheir return journey took them three years, but less than two years later, in 1271, the two men began their second journey to China (Cathay), accompanied this time by two monks and Nicolo’s son, the young Marco Polo. The monks soon turned back, deterred by the harshness of the conditions, but the other three travelled on across the huge wastelands of central Asia and eventually arrived at the court of Kublai Khan. Here Marco Polo quickly learned Mongolian and, gaining favour with the Emperor, was soon employed in his service. He acted as counsellor, was appointed governor of the city of Yangchow, and later acted as an ambassador, visiting areas throughout Asia, such as Tibet, Indo-China and Burma, and learning at first hand about the empire and its varied peoples. He was impressed with the advanced state of Chinese civilisation, and its wealth in silks and spices.

xxxxxIn 1292 the three Venetians made their return journey by sea, joining a fleet of fourteen ships which sailed along the coast of South-East Asia and into the Indian Ocean. They first travelled to Persia on a mission for the Emperor - taking the Khan’s daughter to be the bride of the Shah of Persia - and then journeyed on to Venice, arriving in 1295. They had been absent for no less than 24 years and were able to give first-hand accounts of their travels throughout that time. It is hardly surprising that Marco Polo came to be known as "Marco Millione", the man with a million stories to tell. 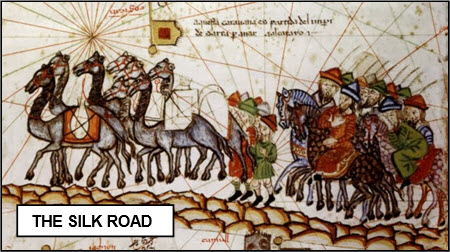 xxxxxThree years later Marco Polo went to sea again, this time to fight for the Venetians against their old rival Genoa. He was taken prisoner during a naval battle in 1296 and was imprisoned for a time in Genoa. It was here that, to pass away the time, he dictated his life's adventures to his cell mate, Rustichello of Pisa, who happened to be quite an accomplished writer. When Rustichello was freed he had his manuscript copied and the resulting book made Marco Polo into a household name. Within a few months the account of his travels was known throughout Italy. Apart from making fascinating reading, this work also helped to dispel many of the myths and fanciful legends then current about people living in regions far to the East. Unfortunately, however, so many manuscript copies were made - about 140 in all - that the original text was often distorted and came to be regarded as fanciful rather than factual.

xxxxxAfter being released from prison, Marco Polo returned to Venice where he seems to have led a rather comfortable life as a semi-retired merchant. He died at the age of 70. 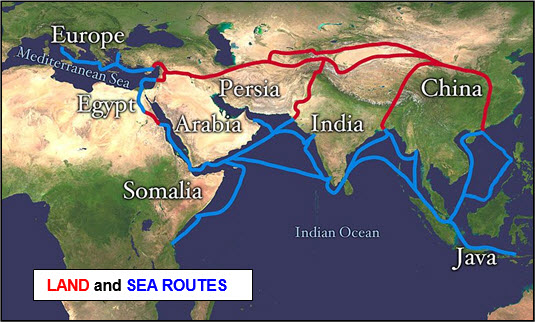 xxxxxIncidentally, part of the outward journey in 1271 took Marco Polo along the Silk Road. This ancient passageway was some 4,000 miles long when completed in about 200 B.C., and by 200 A.D. it was a major trading route. It originated at Sian in northern China and, skirting along the Great Wall, climbed over the mountain area known as the Pamirs, crossed Afghanistan and ended at the Levant. From here the goods were shipped across the Mediterranean Sea. The major trade was in silk, hence the name of the route. This was carried westward in return for gold, silver and wool. With the decline of the Roman Empire in the east, this trade route became increasingly unsafe, but in the thirteenth and fourteenth centuries, under the orderly rule of the Mongols, the road was reopened. Its closure came around 1400 when the Mongol leader Tamerlane overran Asia. Europe had to produce its own silk, and commercial contact with China was not resumed for two hundred years or more. ……

…… Legend has it that on his return home to Italy Marco Polo brought back a Chinese food that was made from flour and water and cut up into thin strips. This dish was adopted by the Italians and given the name pasta!