xxxxxAs we have seen, Genghis Khan became ruler of the Mongols in 1206 (JO). By the year of his death, 1227, his empire stretched from the Black Sea in the west to the Yellow Sea in the east, and from Siberia in the north to the edge of South East Asia in the south - the largest area any one man has controlled. This vast land was then divided into four Khanates (or kingdoms). In the Middle East, one of Genghis Khan's grandsons, Hulagu, set about attacking the world of Islam. After crushing the Assassins, a militant group in northern Iran, he virtually destroyed the rich and advanced city of Baghdad in 1258. Two years later, however, he was soundly defeated in Palestine by the Mamluk leader Baybars and returned to Iran. Earlier, the Mongol leader Batu had ravaged much of eastern Europe, but, as we shall see, it was in China that Kublai Khan, gaining power in 1260, was to make the most spectacular advance.

xxxxxAs we have seen, Genghis Khan became ruler of the Mongol peoples in 1206 (JO) and seven years later embarked upon a military campaign which was to create an empire stretching over vast tracts of Asia. He began his conquest of northern China in 1213, had captured Peking by 1215, occupied the Korean peninsula by 1218, and, before invading India and Russia, had conquered Khwarezm, a vast empire stretching across modern Iraq and Iran and parts of Turkestan. When he died in 1227 after falling from his horse, his territory extended from the Black Sea in the west to the Yellow Sea in the east, and Siberia in the north to the northern borders of South East Asia in the south. It was, in fact, the largest area that any one man has ever controlled.

xxxxxOn his death the empire was divided among the sons of his primary wife, as was the custom, and four Khanates or Kingdoms came into existence: the Great Khanate (later led by Kublai Khan), the Hulagu Khanate in Persia (the Il-Khan Empire), the Jagatai (or Chagatai) Khanate in Turkestan and the Khanate of the Golden Horde, later established by Batu Khan in southern Russia. Under Genghis Khan's successor, Ogodei, expansion continued at a rapid pace. The Emperor himself launched an attack on the Chin dynasty of northern China, a task continued by Kublai Khan in 1251, whilst in the west, Batu, the commander-in-chief, began the invasion of central Europe. 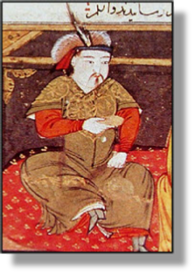 xxxxxIn the Middle East, Hulagu, appointed to extend Mongol rule into the world of Islam, destroyed the power of the Assassins, a militant Islamic sect in northern Iran, in 1256 and then, in 1258, brutally sacked and virtually destroyed Baghdad. The city, once considered as one of the richest and advanced centres in the known world, never recovered from this attack. Then, after establishing the Ilkhanate dynasty in Iran, he attacked and overran Syria. In 1260, however, he was soundly defeated at the Battle of Ain Jalut - north of Jerusalem - by an Egyptian army under the command of the Mamluke leader Baybars, and returned to Iran, settling in Azerbaiyan.

xxxxxMeanwhile, by early 1241 Batu's armies had conquered Russia, including the cities of Kiev and Moscow, and advanced into Poland, Hungary and the Danube valley, plundering, burning and killing as they went. The states of western Europe were now marked out as the next target but, fortunately for them, the invasion never took place. In December 1241 Ogodei died and Batu withdrew his forces, hurrying back home to take part in the struggle for the succession. This over, he never returned to the west, but established the Golden Horde in Russia, a mixture of Turkish and Mongol people who were destined under him and his successors to govern vast areas of today's Russian Federation.

xxxxxBut as we shall see, it was under the leadership of Kublai Khan, coming to power in 1260 and making further headway into China, that the Mongol Empire was to reach its widest dimensions and, later, to meet its first major defeats. 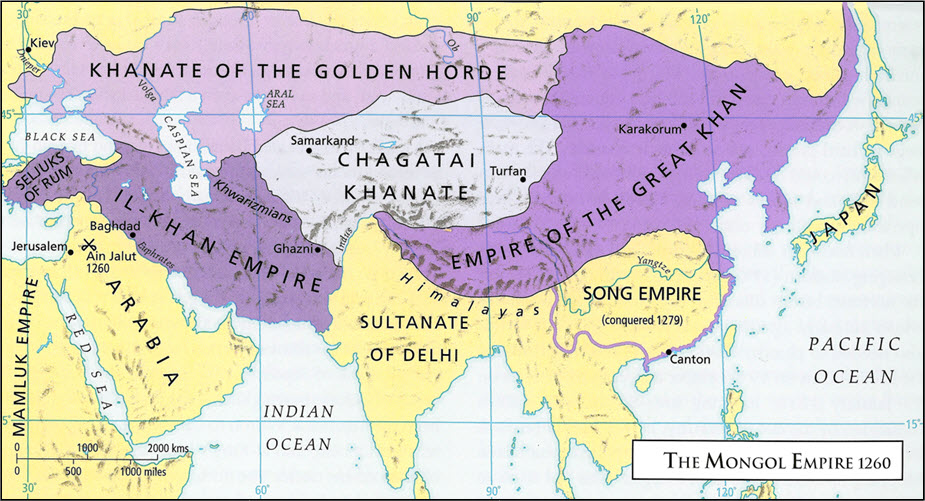