xxxxxThe English scientist and philosopher Roger Bacon, a man of somewhat unorthodox views, was born into a wealthy family and received a good education. It was while at Oxford around 1247 that he became interested in experimental science. In 1266 he began his vast encyclopedia, his Opus Majus, and, on completion in 1268, followed this with his Opus Minus and Opus Tertium - all in Latin. In these works he argued for a close, precise study of nature in order to understand its Creator, and he put great emphasis upon the learning of languages, mathematics, astronomy and the physical sciences. Because of his own interest in these subjects, a number of magical designs were attributed to him, including a flying machine and a mechanically powered ship and carriage. It is not surprising that he earned the dubious title of “Wonder Worker” but, in fact, some of these ideas were stolen from others or were never claimed by him in the first place! Nonetheless he stirred a great deal of interest in scientific thought where little interest had previously been shown. Mention must be made of his two Compendiums in which he severely criticised the current methods of teaching theology and philosophy. 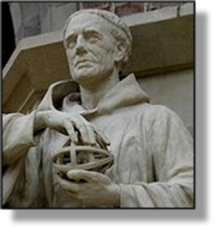 xxxxxA man of many interests, the English scientist and philosopher Roger Bacon became a Franciscan friar in his early forties and was soon causing concern among his superiors because of his outspoken and somewhat unorthodox views on a number of subjects. Indeed, he was imprisoned for a period of time - possibly two years - for what was termed “certain suspected novelties”

xxxxxBacon was born into a wealthy family, probably at Ilchester in Somerset, around about 1220. He benefited from a good education and studied and taught in Paris before returning to Oxford University in 1247. Here, under the influence of fellow scholars, he turned his attention to experimental science, reasoning that such methods could be used to confirm the Christian faith. In 1266, having aroused the interest of the Pope, Clement IV, he began writing, his Opus Majus, a weighty encylopedia (completed in 1268), and followed this up with his Opus Minus and his Opus Tertium. In these works - written in Latin - he strongly advocated the reform of education, arguing that the best means of understanding the world’s creator was by close observation and precise measurement of the natural world. In addition, he held that more emphasis should be placed upon the learning of languages, and the study of mathematics, alchemy, astronomy and the physical sciences. Unfortunately, Clement IV died in 1268, putting an end to any immediate recognition of scientific subjects in the academic world. 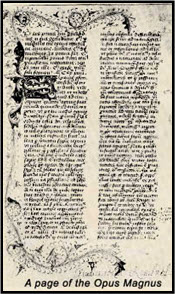 xxxxxOther works by Bacon include two “Compendiums” in which he severely criticised the methods then used for the teaching of theology and philosophy, and treatises entitled On Mirrors and On the Multiplication of Species. He was writing right up to his death, probably at Oxford, in 1292.

xxxxxBecause of his particular interest in practical science, a number of inventions have been attributed to him - such as lenses for spectacles - and he has been credited with the means of making gunpowder and of foreseeing the invention of the flying machine (with flapping wings), and the mechanically-driven ship and carriage. It is perhaps not surprising that he was thought by some to have magical powers and dubbed “Wonder Worker”, a title that did not go down too well among his masters in the Church! It is now known that he gleaned many of his far-reaching ideas from others, but, nonetheless, he did make a contribution to scientific thought and his influence in this field was considerable.

xxxxxIncidentally, in the geographical section of his Opus Majus, Bacon made good use of an account by William of Rubruquis. As we have seen, he was a French Franciscan friar who was sent as a papal envoy to the Mongols in 1253. On his return he wrote a first-hand account of the lands he travelled in and the people he met. ……

xxxxx…… The English jurist Henry de Bracton is thought to have died in this year (1268) and to have left close to completion his major treatise On the Laws and Customs of England. This pioneer work, written in Latin, was the first systematic treatment of English common law. In it he described the practice and procedure of English courts, and recorded certain decided cases as precedents. A collection of some 2,000 law cases, purported to be by his hand, was discovered in 1884. However, details of his life are sketchy and, in some quarters, doubts have even been raised about his authorship of the Laws and Customs of England. What is known for certain is that he became a judge in 1245, and was appointed chancellor of Exeter Cathedral in 1264.

Bacon: by the English sculptor Thomas Woolner (1825-1892), a founder member of the Pre-Raphaelite Brotherhood – University Museum of Natural History, Oxford.