PLUS A SUMMARY OF THE CRUSADES AND THEIR RESULTS

xxxxxAs we have seen, in 1248 Louis IX of France was defeated and captured when he took the Seventh Crusade to Egypt. Undeterred, in 1270 he mustered the Eighth Crusade and led an attack upon Tunisia. This also met with disaster. Soon after arriving, he and his son died of disease, and the whole enterprise was abandoned. Prince Edward of England, arriving late, took his force on to the Holy Land but could do little. By that time nearly all the English enclaves had been attacked and destroyed by the Mamluk leader Baybars. Indeed, as we shall see, the fall of Acre twenty years later in 1291 (E1) virtually put an end to the crusading movement.

xxxxxAs we have seen, the Seventh Crusade of 1248, like the fifth, was directed against Egypt and proved an even greater disaster. Launched in response to the Muslim occupation of Jerusalem in 1244, it succeeded in taking Damietta, but the attack on Cairo ended in total defeat. The crusade’s leader, Louis IX of France, was captured together with much of his army, and a huge ransom had to be paid to gain the king's release. 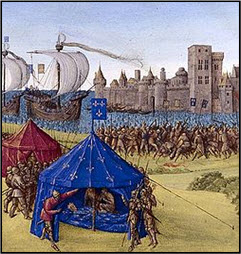 xxxxxUndeterred, in 1270 Louis led another expedition, the Eighth Crusade, this time aimed at the Muslims in Tunisia. But his army was under-strength and depleted by sickness. When Louis and his son suddenly died of disease at Tunis in the summer of 1270 (illustrated), the enterprise was abandoned. A latecomer to this, the last of the Crusades, was Prince Edward of England, heir to the throne. He had intended to join the French forces, but was delayed by shortage of funds. He eventually led an expedition to the Holy Land, arriving at Acre in 1271, but he could achieve nothing of importance.

xxxxxBy this time the Crusader states in Palestine and Syria had all but disappeared, overrun and devastated by a new Egyptian dynasty known as the Mamluks. Under one of their most able leaders, Sultan Baybars, - who earlier, as a military commander, had captured Louis IX during the seventh crusade - the Christian enclaves had been ruthlessly destroyed. By 1271 Caesarea, Haifa, Arsuf, Galilee, Antioch and Jaffa had been captured and their inhabitants massacred. All that remained of the Christian domains were a few precarious outposts scattered along the Mediterranean coast. As we shall see, the fall of Acre in 1291 (E1) virtually marked the end of the crusading movement.

xxxxxDespite his failures in the Seventh and Eighth Crusades, first in Egypt and then in Tunisia, Louis IX (1214-1270) is regarded as one of the most popular French kings. He was a sound administrator and an able soldier. He was also a pious, devout Christian who defended his clergy against excessive papal demands and believed passionately in the cause of the Crusades. It is hardly surprising that after his death he was canonized (made a Saint), the only French king to be so honoured. His friend and advisor, Jean de Joinville (1224-1317), who accompanied him on the seventh crusade, later produced a work entitled Histoire de Saint-Louis, completed in 1309, in which he wrote not only about the king, but also about the extremely harsh conditions endured by the Crusader army. 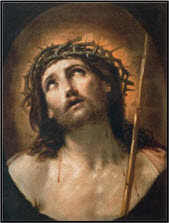 xxxxxIncidentally, in 1239 Louis bought from the Byzantine Empire, then on the verge of bankruptcy, two relics purported to be from Christ’s crucifixion - his crown of thorns and a piece of the cross upon which he died. These were brought to Paris where Louis had a special chapel built to house them. Constructed in the grounds of his palace, then on the Ile de la Cité, this Holy Chapel (Sainte Chapelle) was completed in 1248. Regarded today as an exquisite 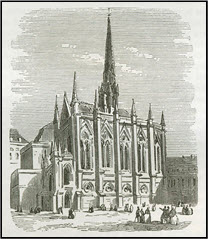 example of Gothic architecture, it contains two chapels in fact, a lower one for the king’s servants and a higher one for the royal family. Because of its three walls of stained glass windows, over 50 feet in height and dating from the 13th century, in bright weather the upper section is flooded with coloured light and has been likened to a jewel box. The building was damaged by fire in the 17th century, and ransacked during the French Revolution, but completely restored during the reign of Louis-Philippe. The relics, which were bought for more than three times the actual cost of building the chapel, are now kept in the treasury in Notre Dame Cathedral.

A SUMMARY OF THE CRUSADES

xxxxxAs you many recall, the First Crusade was called for in November 1095 and proved a resounding success. Deeply troubled by the advance of the Seljuk Turks in the Middle East and the loss of Syria and Palestine to the infidel, the Christian kingdoms of Western Europe amassed a large army and by July 1099 had recaptured the Holy City of Jerusalem and set up four Christian states in the area, the largest being the Kingdom of Jerusalem. This was the high-tide of Christian success and it was never to be reached again over the next 800 years and more.

xxxxxThe Second Crusade got off to a promising start in 1145, led by the French and German kings, but it ended in failure and humiliation. The German army was virtually annihilated on reaching Anatolia, and the French force, having suffered heavy loses on the way, failed to capture Damascus and decided to return home. 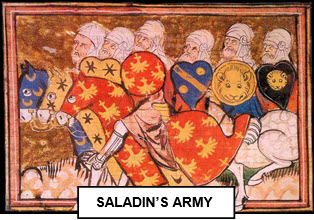 xxxxxBy the time of the Third Crusade in 1189, the Muslims had become united under the leadership of their able leader Saladin and were a force to be reckoned with. When Jerusalem fell to the Muslims in 1187 it was inevitable that the West would send a military expedition. On the face of it, this force was a powerful one, led by the kings of Germany, France and England, but what they had in strength they lacked in unity. The Germans went their own way and returned home when their king, Barbarossa, died in Anatolia. The French and English argued over strategy until Philip Augustus, more concerned with the defence of his own territories in Europe, took most of his army back to France. By negotiating a peace settlement with Saladin, Richard did manage to retain a Latin Kingdom in a slither of land along the Palestinian coast, but Jerusalem remained firmly in the hands of the Muslims.

xxxxxThe Fourth Crusade was a crusade in name only. It started out with high hopes in 1202 but, becoming embroiled in Venetian politics, it ended up attacking and sacking Constantinople and replacing the Christian Byzantine Empire with a Latin Kingdom. This survived for less than sixty years and made no contribution to the cause of the Crusaders.

xxxxxIn 1208 a crusade was launched within Europe. Directed at the Albigensians (or Cathars), a religious sect in southern France which posed a threat to orthodox views, thousands of these heretics were killed and much damage was done to the local economy during a campaign which lasted for more than twenty years. Those who did survive eventually became victims of the Inquisition. And it was during this campaign that the tragic event known as the Children's Crusade was carried out. 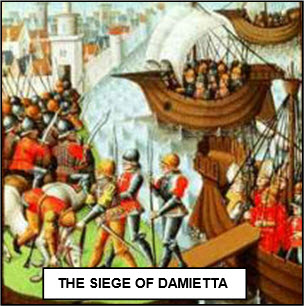 xxxxxThe Fifth Crusade, beginning in 1217 and led by Andrew of Hungary, was directed towards Egypt. It was argued that if Cairo could be captured and then control secured over the Sinai peninsula, the Muslims to the north would be cut off from the support and - equally important - the vital grain supplies that they received from Egypt. It was doubtless a sound strategy, but the Crusaders were too weak to put it into practice. They failed to take Cairo and when promised reinforcements never showed up, they were forced to surrender up Damietta, captured earlier, and abandon the expedition.

xxxxxThe Sixth Crusade was really not a crusade at all, unless we see it as a “diplomatic” crusade. Emperor Frederick II of Germany led out an expedition in 1228 but, on arriving in Egypt, negotiated a agreement with the Sultan whereby the Christians not only regained possession of Jerusalem, but also the cities of Bethlehem and Nazareth. Indeed, Frederick was crowned king of Jerusalem the following year. The holy city was, in fact, recaptured by the Muslims in 1244, but it was nevertheless a diplomatic coup on the part of the German Emperor.

xxxxxAs we have seen above, the last two major crusades were led by Louis IX of France. The Seventh Crusade, launched against Egypt in 1249, was soundly defeated outside Cairo, and the Eighth, directed at Tunisia, was abandoned following the death of Louis in 1270.

THE RESULTS OF THE CRUSADES

xxxxxThere is always a danger of exaggerating the results of the Crusades, but, spread as they were over two centuries, they clearly had some important, wide-ranging repercussions. This may not apply so much to Syria and Palestine, where little remains apart from the ruins of the churches and strongholds abandoned by the Christians, but in Europe they certainly had an impact.

xxxxxOne of their most enduring legacies was the boost they gave to trade, not only for the Italian cities, but also for the bustling ports and markets of the Middle East. Crusaders brought home a variety of spices, colourful textiles, and various items of hardware. These had been available earlier through other channels, of course, but never on so large a scale. The

re were, too, the fiscal implications. The Italian banking system was given an enormous boost, and became more streamlined to meet the needs of these colossal undertakings, whilst Kings and Popes alike were obliged to introduce more efficient means of raising funds, including direct taxation. And the shipping industry also benefited from the increased demand within the Mediterranean.

xxxxxThe military failure associated with all but one of these Crusades also had an effect. Not only did it undermine the authority of the Pope, but it clearly showed the disunity which existed within the Christian Church itself. National armies had often acted alone - with dire consequences - or failed miserably to work with their allies in support of the common cause. As we have seen, in one instance a crusade destined for the Holy Land was turned loose on Constantinople, a Christian city, whilst, in another, the Italian possessions of a monarch who was leading a crusade were attacked on the orders of the Pope. It could well be asked whether this lack of unity was not an open invitation to the fanatical infidel, be he a Mamluk Egyptian of the day or an Ottoman Turk of the future.

xxxxxSome joined the ranks of the Crusaders out of sheer greed, hoping to gain from the booty of war, whilst others were genuinely committed to the Christian cause, or saw their involvement as an expedient means of gaining salvation. There was, too, a large number of men who went in search of new horizons, and it was this spirit of adventure, awakened in the hearts of so many men at this time, which was later to play so prominent a part in the discovery of the New World.

xxxxxThere was, too, some spin-off in art, literature and architecture, but the Crusades were hardly the vehicles for a trade in the humanities. In fact, Byzantine and Muslim culture had already had their outlets into Europe via Sicily and Spain and were not in need of much reinforcement.