xxxxxAs we have seen, Simon de Montfort defeated and captured Henry and his son Edward at the Battle of Lewes in 1264. He then took over the government and summoned a meeting of representatives from the towns and the knights of the shires. This gathering has come to be regarded as the first semblance of a House of Commons, but it was probably called just to provide Montfort with a wider power base. Anyway, that is how many barons saw it, so that when Edward escaped the following year, they sped to his aid. In August 1265 Montfort and his supporters were cornered just outside Evesham, and in the battle that followed most of the rebels were killed, including Montfort himself. Henry was restored to the throne, but from then on the affairs of state were taken over by his son Edward. Meanwhile Montfort was made to serve the king he had betrayed. Various parts of his body were sent all over the realm as a grisly and timely reminder as to what happens to traitors!

xxxxxAs we have seen, after the Battle of Lewes in 1264 when Henry and his son Edward were defeated and imprisoned by a force of barons led by Simon de Montfort (illustrated), the king's cause seemed lost. Montfort at once took over the reins of government and, on the surface at least, created what we might call today the first glimpse of a “constitutional monarchy”. By summoning a gathering of representatives from the towns and the knights of the shires, he formed the first semblance of a House of Commons. It was a step which, today, might warily be seen as laying down the foundations of the British parliamentary system.

xxxxxIn Montfort’s day it was certainly not seen in that light. Many barons looked upon this new assembly as just another means by Montfort to widen his support. They were probably right, so when Edward managed to escape the following year they rallied to his 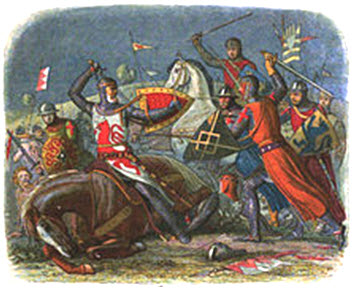 call. Mustering a sizeable army, the young prince trapped Simon de Montfort and his supporters in a bend of the River Avon at Evesham. Here they found themselves at a decided disadvantage, and in the ensuing Battle of Evesham in August 1265, Simon de Montfort’s force was defeated and he himself was killed. This victory restored Henry to his throne but, whilst he remained officially in power until his death in 1272, it was his son Edward who held the reins of government.

xxxxxAfter the battle, the body of Simon de Montfort was mutilated and then hacked to pieces. Parts of it were sent to various places throughout the kingdom to act as grisly reminders of the fate that befalls a traitor. Thus ended the life of a man who had been the king's most loyal subject and his greatest opponent; a man who, probably unknowingly, had put in place the first wobbly foundation stone of Britain’s parliamentary system and thus gained (if not earned) for himself an honoured memorial in the palace of Westminster.