xxxxxIt was whilst working on the staff at Canterbury Cathedral that Thomas Becket came to the notice of the king. He worked as his Chancellor for seven years and did much to extend the power of the monarchy throughout the land. In 1162 Henry appointed him Archbishop of Canterbury in order to cut down the authority of the Church courts - virtually a law unto themselves. However, Becket now devoted himself to the Church that he led, and their close friendship came to an end. He flatly refused to give up any of the privileges enjoyed by the clergy, and this led to a bitter conflict. Matters came to a head when Henry issued the Constitutions of Clarendon, cutting the church courts down to size. Becket denounced these resolutions and fled to France. He returned six years later, after their quarrel had been patched up, but within a short while a blazing row blew up again, this time over the old investiture controversy (who had the right to invest bishops?). In a fit of anger, Henry spoke of getting rid of this "turbulent priest". Four of his knights, taking him at his word, travelled to Canterbury in 1170 and killed Becket in his cathedral. This brutal murder horrified all of Christendom. Henry had to beg forgiveness from the Pope, Becket's tomb became a holy shrine, and the Church in England remained as powerful as ever - and was to remain so until the Reformation in the 16th century. 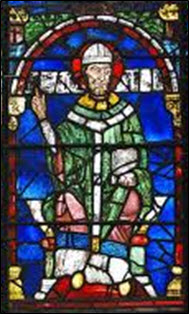 xxxxxThomas Becket was the son of a wealthy Norman merchant and received a good education in London and Paris before studying cannon law at Bologna and Auxerre. Not long after entering the service of the Archbishop of Canterbury he came to the attention of the King and served as his chancellor for seven years (1155-62). His loyalty and, above all, his determination to increase the power of the monarchy throughout the land, were greatly appreciated by Henry and the two men became firm friends. But it was a friendship doomed to failure. In 1162, determined to reduce the privileges and power of the Church courts - they were virtually a law unto themselves and were often far too lenient towards any offender who could claim the vaguest connection with the Church - Henry Appointed Becket Archbishop of Canterbury. Becket was reluctant to take up the appointment and warned Henry of the possible consequences, but the King was confident that, with his support, measures could be introduced whereby anyone found guilty in a Church court would be handed over to the King's court for the appropriate punishment.

xxxxxBut Henry had misjudged the character of his close friend. Once made Archbishop, Becket dedicated himself to the Church he now led. He turned completely away from the life of luxury he had enjoyed at court and began a devout, austere existence, flatly refusing to give up any of the privileges held by the Church. A bitter quarrel followed in which Henry brought a series of charges against his former friend. Matters came to a head in 1164 when the Constitutions of Clarendon, drawn up by Henry to strip the Church courts of their power, were first approved and then denounced by Becket. So dangerous did his position then become, that he had to flee in disguise, taking refuge in the court of the French king, Louis VII. After six years, Henry, anxious to be seen as a supporter of the Church, visited Becket and a measure of reconciliation was achieved. But no attempt was made to reach a compromise over the Constitutions of Clarendon - they were not even mentioned - and no sooner had Becket returned than the final and fateful quarrel broke out. 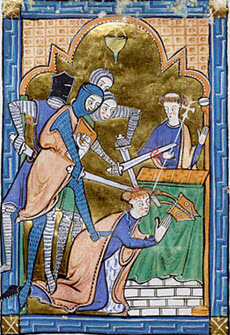 xxxxxWhile Becket was in exile, Henry, in an attempt to avoid any future dispute over his succession, had had his eldest son crowned as co-king by the Archbishop of York and six other bishops, a ceremony which, strictly speaking, could only be conducted by the Archbishop of Canterbury himself. In the interest of the new understanding reached with the King, Becket could have turned a blind eye to this breach of procedure, but he chose not to do so. The Bishops who took part in this ceremony were either excommunicated (thrown out of the Roman Catholic Church) or expelled from office. The king was in France at the time, and when he learnt of Becket's action he flew into a rage and is said to have shouted out "What a pack of fools and cowards I have nourished in my house. Will not one of them avenge me of this turbulent priest?" Four knights of his household decided to do just that. They travelled at once to Canterbury and on the 29th December 1170 found the Archbishop preparing to attend the evening service. They tried to persuade him to absolve the offending Bishops but, when he refused to do so, they followed him into the cathedral and cut him down on the altar steps. 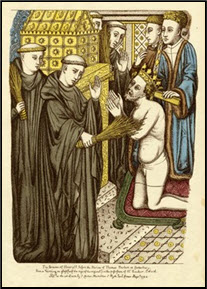 xxxxxThe brutal murder of Becket sent a wave of horror and disgust throughout Europe. Henry himself was devastated by the news. He exchanged his robes for sackcloth and went into seclusion for six weeks. Then, fearing repercussions at home, he decided to lead an expedition to Ireland. He later sent envoys to Rome to clear his name and, as a penance, he spent a night in prayer, kneeling in front of Becket's tomb. He was eventually absolved by the Pope, but the damage had been done. The Church in England remained as powerful as ever and, indeed, was able to forge even closer links with the Papacy. And the shrine of his one-time friend became an important place of devotion and pilgrimage, a constant reminder over the next three hundred and fifty years of the importance of the Roman Church in the affairs of Christian states. With the coming of the Reformation, however, in the sixteenth century, Henry VIII had Becket's tomb destroyed and his bones burned. In addition, all reference to the Roman Catholic martyr was erased from Church service books. The power of the state had eventually triumphed.

xxxxxIncidentally, it is reported that directly after the murder of Becket many local people hurried into the cathedral to smear themselves with his blood and take away pieces of his vestments. Within a few months it was claimed that miracles were being performed at his tomb.

xxxxxOver the years, much has been written about the murder of Saint Thomas á Becket, canonized (i.e. made a saint) just three years after his death. Two works must suffice. Towards the end of the fourteenth century Geoffrey Chaucer, the greatest English poet of the Middle Ages, wrote his famous Canterbury Tales, a collection of stories told by a group of pilgrims as they made their way to the tomb of the "blissful martyr", and in 1935 the Anglo-American playwright T.S. Eliot produced his modern miracle play Murder in the Cathedral.