xxxxxThe Dublin-born satirist Jonathan Swift came to prominence as a writer with his Tale of a Tub. Published in 1704, this attacked the corruption and pretence in religious and teaching circles. Then in 1711, writing for the Tories, he tore into the Whigs, accusing them of prolonging the War of the Spanish Succession for their own ends. His masterpiece came in 1726 with the publication of Gulliver’s Travels, a story of voyages to four make-believe worlds, each inhabited by giants, little people, mad scientists and horses. These travels gave him ample opportunity to ridicule the failings of humans in general and certain groups in particular. And to this time belongs his Drapier Letters, shedding light on the pitiful condition of the Irish people at that time. He contributed to the Tatler, and numbered among his friends the writers Pope, Gay, Congreve, Steele and Addison. He cared passionately about the welfare of people, and used his caustic wit, satire and irony in a genuine attempt to improve their lot. 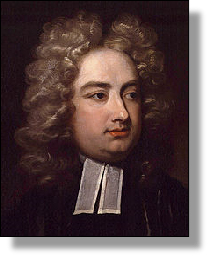 xxxxxThe satirist Jonathan Swift was born in Dublin, just a few months after the death of his father, an Englishman who had settled in Ireland in 1660. He attended Kilkenny School and Trinity College, and in 1689 began work as secretary to the diplomat and essayist Sir William Temple, then living at Moor Park in Surrey. Despite some tension between the two men, he stayed there for ten years, only paying two visits to Ireland, during the second of which he was ordained into the Church of England. While at Moor Park, his tasks were to assist Temple in preparing his written work, and to supervise the education of Esther Johnson, the young daughter of Temple's widowed housekeeper, but he also had much leisure time for reading and writing. To this period belongs his first prose satire The Battle of the Books, a mock epic dealing with the argument then raging about the relative merits of ancient and modern literature. Providing a foretaste of his vitriolic pen, he came down firmly in favour of the ancients, and, defending the views of his patron Sir William, launched a blistering, satirical attack upon the pedantry and inferior standards of the "moderns".

xxxxxA master of English prose, and one of the most penetrating satirists in exposing human folly and failure, his writing career took off with the publication in 1704 of his A Tale of a Tub, a highly amusing satirical work attacking the corruption and pretence then rife in both religious and teaching circles. It was a hard-hitting piece, and it hit where it hurt, but it won him no favour at the Court of Queen Anne! Then in 1710, with the coming to power of the Tories, Swift, a somewhat disenchanted Whig, dedicated his pen to their cause. Taking over the editorship of The Examiner, the official Tory journal, he spared the Whigs no mercy. Whilst defending the policy of the Tory administration, he tore into the Whigs' recent record. Successful above all was his charge, eloquently thrust home, that they had purposefully prolonged the War of the Spanish Succession for reasons of self-interest. Contained in his The Conduct of the Allies, issued in November 1711, this savage indictment doubtless played a part in the subsequent dismissal of Marlborough, the commander in chief of the British army. In 1713, however, Swift was appointed dean of St. Patrick's Cathedral in Dublin, and this office, together with the Tories' fall from power the following year, cut short his career as a political propagandist. 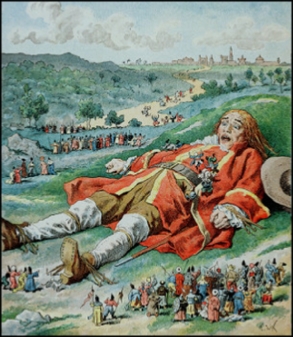 xxxxxGulliver'sTravels, his masterpiece, and the work for which he is certainly best remembered, was published anonymously in 1726. It caught the imagination of the public, and was an instant success. In keeping with its proper title, Travels into Several Remote Nations of the World, it tells of Captain Gulliver's voyages to four make-believe lands - Lilliput, where the people are only si 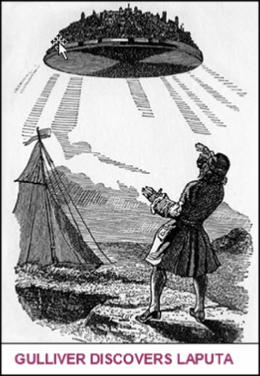 x inches tall; Brobdingnag, the home of huge giants; Laputa, a floating island inhabited by mad scientists and sorcerers (an obvious lampoon of the Royal Society!); and Houyhnhnmland, where highly intelligent horses rule over evil and obnoxious humans known as Yahoos. As doubtless intended, such a selection of settings provided ample scope for Swift to hold up to ridicule the pretence and hypocrisy of humankind in general, be it in politics, court circles or society at large. He did not fail in his task, but ironically enough, this scathing satire on human stupidity and evil, simply written and feeding on the imagination, became and remains today a favourite children's book of fantasy - though generally confined, at this level, to the first two voyages.

xxxxxAnother influential work was his Letter to the Whole People of Ireland, written by "A Drapier"; and published in 1724. In fact, these were a series of pamphlets which came to be known as the Drapier's Letters, successfully urging the Irish to refuse to have a new and debased coinage imposed upon them 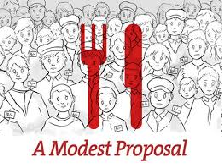 . Then five years later he highlighted the abject poverty in Ireland with his A Modest Proposal, written this time by "An Economist". In this he suggested with the cruellest and the bitterest of irony that the children of the poor should be sold as food to the wealthy so as to make an economic profit out of a national burden! With such highly provocative contributions, it is little wonder that he became something of a hero to the Irish people, then weighed down with high taxes and at the mercy of oppressive landlords.

xxxxxLittle is known of Swift's private life. We know, however, that he kept up a correspondence with Esther Johnson, his young pupil from his days at Moor Park, and some scholars have suggested that they may have secretly married. For some reason or other he called her Stella, and he began a series of intimate letters to her in 1710, contained in his Journal to Stella. Written over three years - when she was living in Dublin - the letters tell of his life in London and shed a great deal of light on the political situation at the time, and on his own character. The depth of this friendship is not known, but it might well have been adversely affected by his meeting with a woman he called Vanessa in 1707, the daughter of a Dublin merchant. Although Swift only saw her as a friend, this might well have caused a breakdown in his relationship with Stella. 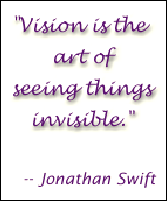 xxxxxSwiftxwas a contributor to the Tatler and in 1714, together with his friends Alexander Pope, John Gay, John Arbuthnot and Thomas Parnell, he founded the lively Scriblerus Club, aimed at ridding the literary world of pretence and pedantic jargon. He also numbered among his friends William Congreve, Richard Steele and, for a while, Joseph Addison. Regarded today as the most powerful prose satirist in the history of the English language, his work was more than likely influenced by the Roman satirical poet Juvenal, and two English writers, Samuel Butler, author of Hudibras, and Francis Godwin, an historian who wrote the fanciful story about The Man in the Moon.

xxxxxIt seems that Swift's last years were dogged with ill-health. He suffered from repeated attacks of dizziness and nausea, and became so physically weak by 1742 that guardians were appointed to take care of him. Following his death in October 1745, he was buried in his own cathedral, alongside the coffin of his close friend Stella. The epitaph he wrote for himself is worth recording:

xxxxxxxxxxHere lies the body of Jonathan Swift, D.D., dean of this cathedral, where

xxxxxxxxxxburning indignation can no longer lacerate his heart. Go, traveller, and

xxxxxxxxxximitate if you can a man who was an undaunted champion of liberty.

xxxxxIt was a fitting memorial to a man who cared passionately about the welfare of people, and used wit, satire and irony to telling effect in his genuine attempt to put wrong to right.

xxxxxIncidentally, in 1937 the English poet Edith Sitwell wrote a novel based on the life of Swift and gave it the title I Live under a Black Sun.