In 1176, the first Eisteddfod is held at Carnavon Castle. It was discontinued in the late 17th century but restored as a national event in 1880.

Windmills with vertical sails begin to appear in Europe 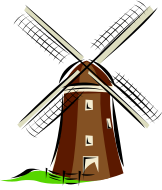 1189 The first Silver Florin is minted in Florence, hence its name.

The Chinese use explosives in warfare, but it was not until 1232 or thereabouts that they used gunpowder to propel arrows and incendiary devices.