THE CAPTURE OF JERUSALEM 1187

xxxxxAs we have seen, Jerusalem was captured by the First Crusade in 1099 (W2). Its re-conquest by the Muslims some 90 years later was due to the military and political genius of the Sultan of Egypt, Saladin. An astute diplomat and an experienced man of war, it was he who united the Muslims of Sinai, Egypt and Palestine in a war to recapture their holy city. After a successful campaign against the Christian garrisons, he took Jerusalem in September 1187. Dismayed and alarmed, the monarchs of Western Europe, including the English king Richard I, prepared for yet another venture to the Holy Land. As we shall see, the Third Crusade left with high hopes in 1189 (R1). In fact, as history was to have it, Jerusalem was to remain in Muslim hands until December 1917. 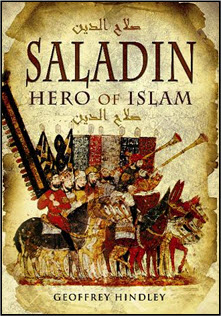 xxxxxAs we have seen, the capture of Jerusalem from the Muslims in July 1099 (W2) was the culminating triumph of the First Crusade. The cross replaced the Muslim crescent, the infidels were mercilessly slaughtered, and the Holy places wrested from their grasp. It was a triumph for militant Christendom. But less than ninety years later, Jerusalem was again in the hands of the Muslims, and it was destined to remain so for the next 730 years. It was not until December 1917, in fact, during the First World War, that the city was captured by British troops, the climax of a successful campaign against the Turks in the Middle East.

xxxxxThe recapture of Jerusalem by the Muslims in 1187 was due in large part to the political as well as the military genius of one man - the Kurdish born Sultan of Egypt, Saladin. It is true that, following the victory of the First Crusade, the garrison left to defend the Holy Lands was alarmingly small and often bitterly divided over policy and strategy, but whilst the Muslims who surrounded the Christian forces were themselves disunited and lacking in leadership there seemed little real threat to Jerusalem or any of the surrounding garrisons. Saladin changed all that. He it was who united the local emirs, if only for a limited time, whipping up their support for the re-taking of Jerusalem, a city which was as holy to them as it was to the Christian invaders. 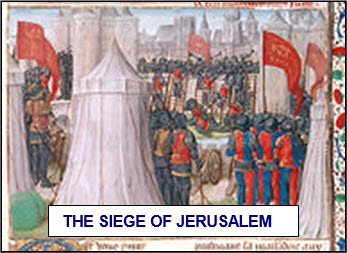 xxxxxHis campaign started in the summer of 1187. Declaring a Holy War, he utterly defeated a large Christian force at the Battle of Hattin, overrun Tiberias and Acre, reached the gates of Jerusalem by September, and took the city after a siege lasting just twelve days. Those Christians who survived the attack were allowed to leave and take refuge in the coastal town of Tyre on payment of a ransom - a generous gesture which typified Saladin's noble spirit in times of triumph. When the news of the Muslim victory reached the West it was met with dismay and resolve. Pope Gregory VIII immediately proclaimed the need for another Crusade and the Kings of Europe prepared for battle. By the time the international force was mustered, however, Henry II was dead and his son Richard - nicknamed the "Lionheart" and desperately keen to lead a force to the Holy Lands - was on the English throne. 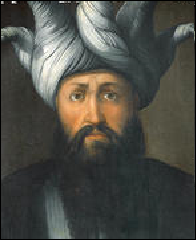 xxxxxSaladin, the most famous of Muslim soldiers, was born into a prominent Kurdish family and grew up in northern Syria. His military career began when he joined the staff of his uncle Asad-ad-Din, a respected military commander. He took part in three expeditions into Egypt and quickly showed his talent as a skilful tactician. Such was his rapid advancement - though his family connections may have had something to do with it! - that in 1169 he was appointed commander of the Syrian forces and Sultan of Egypt. Inspired from his youth by the idea of a Holy War (the Jihad), he then set about uniting the Muslim territories - such as Sinai, Palestine and Egypt - using a combination of military and diplomatic skill to rekindle the religious fervour and zeal which had characterised the founders of Islam. His outstanding success in this task was matched by his reorganisation and improvement of the Muslim armed forces now at his disposal. Thus by 1187 he was ready and able to take on the Kingdom of Jerusalem and seize the prize - the recapture of the Holy City of Jerusalem. As we might expect, a third crusade was inevitable, and it was launched in 1189 (R1).