xxxxxAs we have seen, in 1499 (H7) Shah Ismail I founded the Safavid dynasty, and he was in control of most of Iran by 1512. The Safavids were defeated by the Ottoman Turks two years later, but early in the 17th century Shah Abbas captured Baghdad and a large part of eastern Iraq, extending his empire from the Tigris to the Indus. Iran then developed into an important trading nation centred around Esfahan. But his successors failed to guard the empire against infiltrators. Eventually one of the empire’s own subjects, having seized the throne of Afghanistan, invaded Iran in 1722, overthrew Sultan Husayn, and all but brought down the Safavid dynasty. At the same time Peter the Great occupied most of northern Iran and the Turks moved in from the west. As we shall see (1739 G2), it was not until 1736 that the country was reunited under Nadir Shah and a new empire was built. 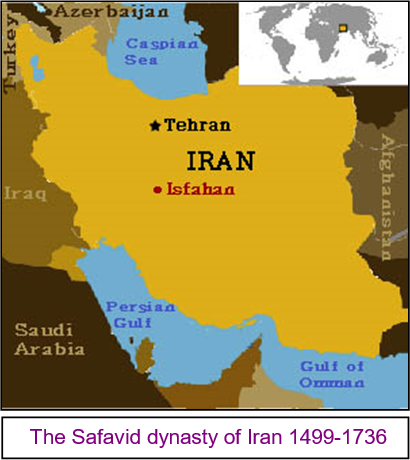 xxxxxThe Safavids originated as a group of Islamic mystics called the Sufis, and were named after their founder Safi-al-Din at the end of the thirteenth century. Known as the Kixilbash because of their red head-dress, they first belonged to the Muslim sect called the Sunnites, but later became Shiite Muslims.

xxxxxAs we have seen, in 1499 (H7) Shah Ismail I founded the Safavid dynasty, and by 1512 had united most of Iran under his rule. The Safavids were defeated by the Ottoman Turks two years later at the Battle of Chaldiran and lost some of their territory, but in the early part of the 17th century, under their very able leader Shah Abbas I, much progress was made. Having built up a powerful standing army and regained the lost land, he then went on to capture Tabriz from the Ottoman Turks and, in 1623, the city of Baghdad itself, together with a large part of eastern Iraq. By this year his empire extended from the Tigris in the west to the Indus in the east. Furthermore, due to his sound administration at home, Iran developed into an important trading nation, centred around its capital, the beautiful city of Esfahan. 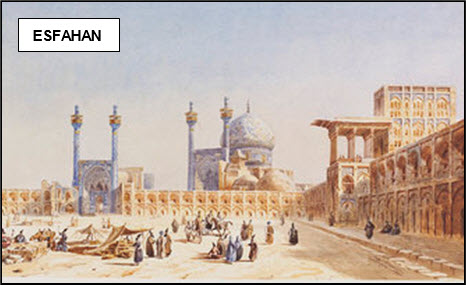 xxxxxHowever, none of his successors came anywhere near his ability, and towards the end of the century the rot really set in. Husayn I, the shah who came to power in 1694, proved totally unfit to govern, and the empire began to disintegrate. He depleted the treasury to fund his own extravagance, and allowed the powerful mullahs (leading clergy) to take over complete control of the government. Russia and Ottoman Turkey, sensing the decline, began to take over Iranian territory along their borders. Then in 1720 one of his own tribal subjects, Mahmud, having seized the throne of Afghanistan, began to make raids into Iran, and followed this up in 1722 with an all-out invasion. He captured Esfahan and, seven months later, seized power from Husayn and had him murdered. Two more members of the Safavid royal house continued to occupy the throne, but they were rulers in name only. The Safavid dynasty had virtually come to an end.

xxxxxIn the meantime, the Russians and Ottoman Turks took advantage of the situation. Peter the Great, anxious to open up a trade route to India east of the Caspian Sea, occupied much of northern Iran, while the Turks moved in from the west, determined to keep the Russians from their border. A clash between the two countries was narrowly avoided by a settlement reached in 1724 by which both powers retained the territory they had occupied, but shared the area in the north-west. 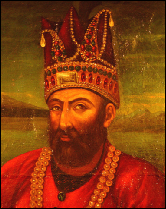 xxxxxBy then, there was not much left of the old Iran, but Nadr Qoli Beg, a local brigand chieftain, was eventually able to reunite the country, driving out the Afghans and Turks by 1732, and forcing the Russians to give up their Caspian provinces. As we shall see (1739 G2), in 1736 he deposed the last of the Safavid royal house and was elected Shah of Persia (Iran) with the title Nadir Shah. Another empire was in the making, though it was not destined to last for long.