xxxxxThe Italian Giovanni Palestrina was one of the greatest Renaissance composers. In 1551 he became musical director of the Julian Chapel Choir, responsible for the music in St. Peter's, Rome, and it was here that he wrote his first book of masses. His music was written for voice alone, and was noted for its haunting, mystical and harmonious tone. His compositions mainly consisted of 102 masses, 250 motets (songs for two or more voices), 35 magnificats and 45 hymns. His secular music included a book of madrigals. His life was saddened in 1570 with the loss of his wife and two sons during an epidemic. 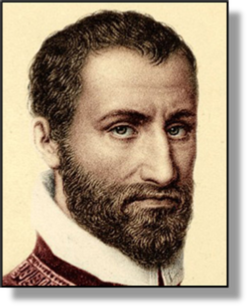 xxxxxThe Italian Giovanni Pierluigi Da Palestrina is regarded as one of the greatest composers of the Renaissance. He was born in Palestrina (adopted as his name), and, after studying in nearby Rome, he returned to his native town in 1544 to become the organist and choir director in the cathedral there. He left in 1551 to take up the post of musical director of the Julian Chapel Choir, a position which made him responsible for the music in St. Peter's Basilica. While there he wrote his first book of masses, dedicated to Pope Julius III, but with the election of Pope Pius IV in 1555 a stricter rule prevailed and, as a married man, he was obliged to leave his post. However, after various other appointments, two of them in Rome, he returned to the Julian Chapel in 1571 and, as director of music, stayed there until his death in 1594. 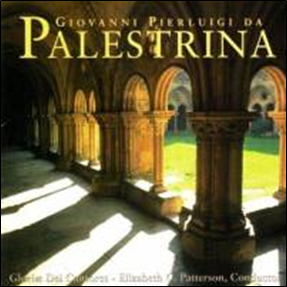 xxxxxHis style is praised above all for its serenity, and for the haunting, mystical tone that it captures. His music was written for voice alone and each part is technically designed to produce gentle curves of harmonious sound, devoid of any sudden, obtrusive changes. During a long career he wrote a great deal of religious music, the largest part made up of 102 masses - notable among them being his miss ecce sacerdos of 1554 - and 250 motets, songs composed for two or more voices. He also wrote 35 magnificats, 68 offertories, and 45 hymns, and his secular compositions - though relatively limited - included a book of madrigals. Despite the size of his output, the standard of his work remained consistently high. Indeed, in recognition of his outstanding contribution to church music, in 1578 he was given the title of Master of Music at the Vatican Basilica, and, two years before his death, his fellow composers wrote 16 settings of the Vesper Psalms to his praise.

xxxxxIn his private life, he suffered much sadness. He married in 1547 and had three sons, but in 1570 his wife and two of his sons died during a severe epidemic. Palestrina himself was taken seriously ill, but he and his third son, Iginio, eventually survived. Later, in 1581, he married the widow of a rich merchant.