xxxxxAs we have seen, the Battle of Poltava in 1709 (AN) meant the demise of Sweden as a major power, and the expansion of Russia in the west. By the Treaty of Nystadt in 1721 Russia gained control of the Baltic Sea, and this meant that Peter the Great could now build a sizeable navy, increase trade with the west, and became a major European power. In addition, the following year he attacked Persia and, overrunning Baku, gained land on the western shores of the Caspian Sea, the first step in the control of that area and the Black Sea to the west. At home, however, he remained in power by sheer force, keeping down the nobility and reducing the serfs to virtual slaves. When he died in 1725, he was succeeded by his wife Catherine and she began a line of ineffectual leaders. However, Elizabeth I, coming to the throne in 1741, brought a measure of stability and as we shall see (1774 G3a), she was followed in 1762 by one of Russia’s greatest leaders, Catherine the Great.

xxxxxAs we have seen, the Battle of Poltava in 1709 (AN), the last major clash of arms in the Great Northern War, was a humiliating defeat for the Swedes and a major victory for the Russians. For Charles XII it meant the demise of his country as a continental power. For Peter the Great it was the fulfilment of a dream - the conquest of the Baltic Provinces and, at last, the opening of a window on Western Europe. 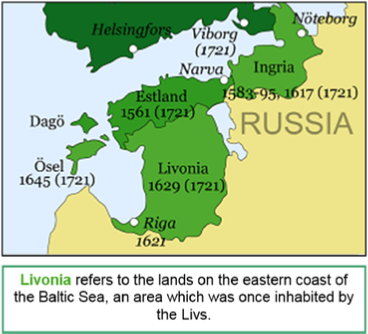 xxxxxBy the terms of the Treaty of Nystadt in 1721, Sweden ceded to Russia the provinces of Estland, Livonia and Ingria along the eastern shores of the Baltic, making Russia master of this vital sea link with the west. In addition, a strip of Karelia (from Finland) and the area around St. Petersburg were formally given up to Russia, and Sweden transferred its German territory - Stettin and West Pomerania - to Prussia. It was a settlement of contrast. Russia, having gained control of the Baltic, could now create a sizeable navy, expand its trade, and take its place as a major European power. On the other hand, Sweden, having lost its hero king three years earlier - together with the triumph he had brought - was now to sink to a second rate power in the affairs of Europe.

xxxxxFollowing the treaty, Peter the Great was proclaimed Emperor of all the Russias (assuming, be it noted, a western title). Like Great Britain and, indeed, Prussia, his country could no longer be left out of the European equation. By learning from the West in matters of industry, trade and warfare, he had modernised his state to a surprising degree, and transformed it into a major military power. Nor were his days of expansion over. In 1722 he went to war with Persia and, overrunning Baku, gained land along the western shores of the Caspian Sea in return for military aid. Here, as against the Ottoman Turks, his gains were modest, but they marked the beginning of his country's determination to gain control of the Caspian Sea and, above all, the Black Sea to the west. 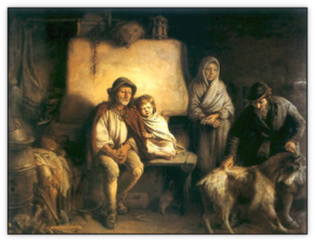 xxxxxBut there was a downside to his reign. In order to drag Russia into the 18th century - at least in matters of power politics - he established an autocratic regime in which citizens were expected to pass their lives in the service of the state. In such a dictatorship the serfs (peasants) regressed to a condition of virtual slavery, bought and sold at the will of the industrialist or farm manager. It is hardly surprising that this led to two particularly violent revolts, one in Astrakhan in 1705 and the second in the Don basin two years later. Needless to say, both were put down without mercy. Furthermore, the changes required to bring about reform were so

rapidly and ruthlessly implemented, that there was no time for evolution. Those who questioned the system were sent to Siberia as political prisoners, or simply executed. Thus a deep gulf opened up between a restricted upper, ruling class and a vast body made up of the common people. It was a divide that was to sow the seeds of revolution in the fullness of time.

xxxxxThe Tsar had married Catherine, his former mistress, in 1712. When his son from his first marriage, Alexis, died in 1718, she was created empress consort in 1724, and succeeded Peter on his death the following year. She began a line of ineffectual leaders, most of whom were brought to power by a series of coups instigated by court favourites or notables with the support of the palace guard. It was not until Elizabeth Petrovna, youngest daughter of Peter the Great, came to the throne in 1741 - again by a palace conspiracy - that firm rule was once more established. As we shall see (1774 G3a), in 1762 she was followed by one of Russia's greatest leaders, the redoubtable Catherine the Great.

xxxxxIncidentally, the Russian writer Aleksey Tolstoy (1883-1945) wrote a historical novel entitled Peter the Great. He started writing it in 1929, but had not completed it at his death in 1945.