Work was begun on the cathedral of Notre Dame de Paris in 1163 and not completed until 1250. Even then, porches and chapels were added, and the centre spire was not put in place until the 19th century. This magnificent cathedral on the Ile de la Cité is a fine example of Early Gothic Architecture, the main features being the massive twin towers, the pointed arches, the huge rose windows, and the single-arch flying buttresses. It was these delicate but powerful supports, plus improvements to the interior vaulting, that made possible thinner walls, large areas of stained glass, and a much loftier interior. A major restoration programme was carried out in the mid-19th century. The Gothic style (meaning "barbarian" and dating from about 1200 to 1500) was so called because it was seen as inferior to the architecture of the Renaissance. In fact it can boast of some very fine buildings throughout Europe. In England the style is divided into Early English (Westminster Abbey), Decorated (York Minster), and Perpendicular (Winchester Cathedral). 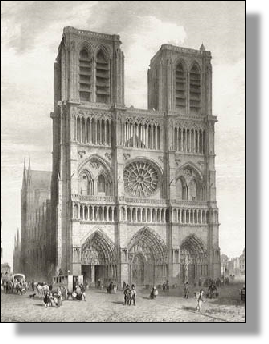 The foundation stone of the cathedral of Notre Dame de Paris was laid by Pope Alexander III in 1163, and the major work of construction was not completed until 1250. Porches and chapels were added later and the centre spire was not installed until major restoration work was carried out in the nineteenth century. Situated at the eastern end of the Ile de la Cité in the middle of the River Seine, this magnificent cathedral and imposing landmark is a fine example of Early Gothic architecture. It stands on the site of two earlier churches, and it was Maurice de Sully, bishop of Paris at this time, who conceived the idea of converting the ruins of these two buildings into a single edifice of enormous proportions.

The major Gothic features include the two massive towers (over 220 feet high) which dominate the western facade, the huge rose windows still retaining the original stained glass, the exquisite stone tracery, and the single-arch flying buttresses, powerful in construction but delicate in design. It was these exterior supports, together with an improvement in the interior vaulting, which enabled the thick Romanesque walls to be replaced by a less robust structure and the inclusion of large areas of stained glass. Furthermore, this new technique enabled interior vaulting to be taken to unprecedented heights - to an amazing 115 feet in the case of this particular building. 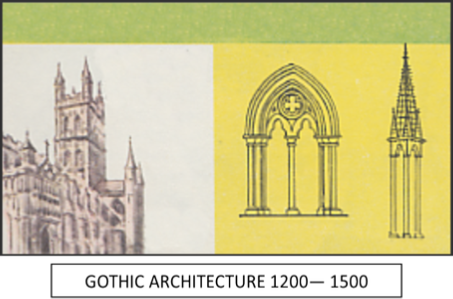 Following a fair amount of damage and deterioration over the centuries, a major restoration programme was carried out in the mid-nineteenth century, drawn up by the French architect Eugene Viollet-le-Duc. The cathedral provided the setting for Victor Hugo's famous novel Notre Dame de Paris, published in 1831, and translated into English two years later as The Hunchback of Notre Dame. In addition, this historical novel has been the subject of a number of films and was made into a successful musical, The Phantom of the Opera, in the late twentieth century. 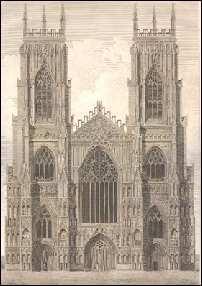 The word Gothic was first used as a term of contempt, implying that the style of architecture current before the Renaissance was as lacking in artistic taste as the barbarians (Goths) who had swept away Roman civilisation in the fifth century. Since this hasty judgement, however, the Gothic era, spanning the years between the Romanesque and Renaissance periods, has come to be regarded as one of the finest in the history of European architecture. Its development during a period from 1200 to 1500 has varied from country to country, but throughout Europe the style has been characterised by the pointed arch, elaborate vaulting, and the extensive use of external buttresses, all contributing to the height and grandeur of these medieval masterpieces. In England the style is divided into three phases, based mainly upon an improvement in window design, namely: Early English 1200-1300, to be seen in Westminster Abbey; Decorated 1300-1400, a fine example being that of York Minster (illustrated); and Perpendicular 1400-1500, at its best in the construction of Gloucestershire and Winchester Cathedrals.

The Tower of Pisa, begun in 1174, was found to be leaning soon after work was started, due to the unstable nature of the earth below. Designed as the bell tower for the city's cathedral, but with a foundation of no more than ten feet, it is something like sixteen feet adrift from the perpendicular. Many attempts have been made to secure the building, the most recent and most promising carried out in the 1990s. Apart from the tower, Pisa is also the birthplace of the brilliant Italian scientist Galileo. 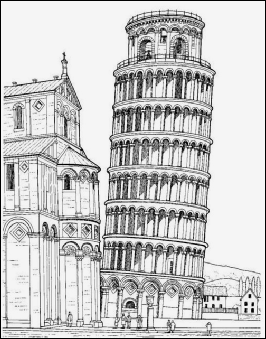 Three other buildings of note were built during this period. In 1174 work was begun on the famous Leaning Tower of Pisa in Tuscany, Italy. It is not always realised that the tower began its leaning act whilst under construction. In fact it began to tilt when it was little more than 33 feet high and attempts were then made to rectify the fault by making the upper walls of varying thickness. As gardeners might say, the fault lies in the soil. The Piazza del Miracoli, the square on which the tower is built, is made up of layers of clay and sand and, over the years, the area has slowly subsided.

The tower was built as a campanile or bell tower for the city's cathedral. Erected on a foundation of no more than 10 feet, it is about 180 feet high and is something like sixteen feet adrift from the perpendicular. Major repairs were carried out in 1990, and five years later a ring of concrete was built around its base and anchored deep below the surface. But whether the tower survives or not, it is not Pisa's only claim to fame. This city is the birthplace of the distinguished Italian scientist Galileo.

Work on the Bridge at Avignon in Province, made popular by the little French song Sur le pont d'Avignon, was begun in 1177 and completed in 1185. Built by St. Benezet and named after him, the bridge was a marvel for its day, with twenty lofty arches, each with a span of just under 100 feet. Unfortunately only a small portion of the bridge has survived. 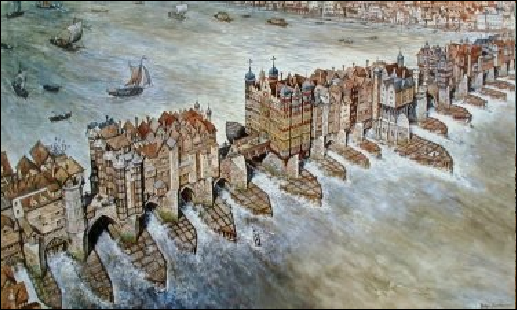 The first London Bridge to be made of stone was also built about this time. It was designed by Peter of Colechurch who, having completed the last timber bridge across the Thames in 1163, started this ambitious new project in 1176. Because of the swift flowing current, great difficulty was encountered in laying the foundations for the piers, but the problems were eventually overcome. When completed, the bridge supported a street which was wide enough to have shops and houses on both sides. In addition it had a built-in drawbridge which allowed for the passage of ships at high tide. The illustrations here show the bridge in Elizabethan times, around 1600. The northern end of the bridge had to be repaired following the Great Fire of London in 1666, and in 1763 all the houses and shops were removed, but the bridge remained in use until it was replaced in 1831, having served the capital city for more than 600 years. It is likely that the nursery rhyme London Bridge is Falling Down refers to this bridge, the first of three London bridges. The second bridge was designed by the Scottish engineer John Rennie, and was opened in 1831.

More about the Gothic style - including the building of Salisbury Cathedral in Wiltshire, England - is to be found in 1220 (H3).