xxxxxThe Maoris are probably Polynesian people who journeyed by canoe to New Zealand between the 9th and 12th centuries. Settling in the warmer island in the north, it is estimated that they crossed into the southern island around 1550. They were a tribal people, living in hilltop villages and using commoners and families captured from other tribes to cultivate the land. Priests were part of the ruling class, and there is evidence of cannibalism and head hunting. They were noted for their decorative wood carvings and long canoes. As we shall see, by the Treaty of Waitangi in 1840 (Va) the British Crown recognised Maori sovereignty, but conflict later broke out between them and the European settlers over land ownership.

Portrait: by the Scottish illustrator Sydney Parkinson (c1745-1771), who took part in Cook’s first voyage to New Zealand in 1769. Contained in his book A Journal of a voyage to the South Seas, published in London, 1784 – Alexander Turnbull’s library, National Library of New Zealand, Wellington. Village Life: by Captain W. Mein Smith (1798-1869),1845, then leading a team which surveyed the town of Wellington – National Library of Australia, Canberra. Maoris: date and artist unknown. 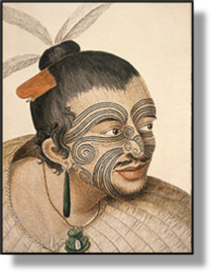 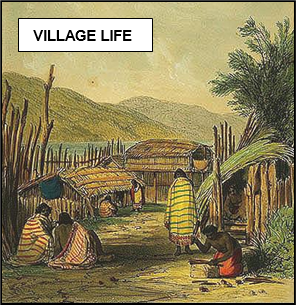 xxxxxIt is thought that the Maori people are descended from the inhabitants of the Polynesian islands of the South Pacific who travelled across to New Zealand by canoe, arriving at various times between the 9th and 12th centuries. They settled mostly in the north, where the weather was warm and to their liking, but it is believed to be around 1550 that they crossed into the southern island in larger numbers. The Maori lived in tribes, each inhabiting their own separate territory. They dwelt in fortified, hilltop villages, and their priests were part of the aristocratic ruling class. Commoners and slaves captured in inter-tribal warfare cultivated the land, and there is evidence of cannibalism and head hunting. Their dancing, songs and storytelling were aimed at maintaining tribal unity, and they were particularly noted for their decorative wood carvings, especially on their long canoes and at the entrances to their meeting houses. They called their land Aotearoa, meaning "long daylight".

xxxxxThe coming of the Europeans in the 18th century caused no immediate friction and, as we shall see, the Treaty of Waitangi in 1840 (Va) recognised Maori sovereignty when it was ceded to the British Crown. Twenty years later, however, following more European settlement, conflict did arise over the o 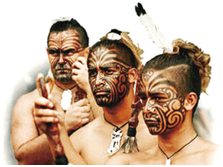 xxxxxIncidentally, in Maori culture both men and women were tattooed, mainly to show a person’s rank and achievements. Lines were chiselled into the skin and made permanent by the rubbing in of a dye made up of soot and dog fat.