xxxxxThe Kett Rebellion, which broke out in Norfolk in 1549, was a protest against the enclosure movement, a measure whereby common land was being taken over by the landlord for his own private use. Some 16,000 rebels, led by the Kett brothers, Robert and William, took over Norwich in the August, but a force under the Earl of Warwick (later the Duke of Northumberland) routed them at Dussindale, just outside the city. The Kett brothers were hanged at the end of the year. The enclosure movement caused much hardship amongst the peasantry and small landowners over the next two centuries. 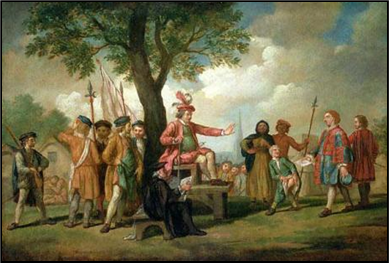 xxxxxThe rebellion of July 1549 was centred in Norfolk. Led by a small landowner, Robert Kett, and his brother William, it was a revolt against the enclosure movement, a measure whereby an area of common land traditionally reserved for the peasants was taken over by the landlord for sheep grazing or other private uses. The rebels, some 16,000 men, organised a kind of "Commonwealth" on Mousehold Heath just outside Norwich, and then in August took over the city. The Duke of Somerset, who had attempted but failed to prevent the spread of enclosure, proved ineffectual in dealing with the disturbance, and when Robert Kett refused the offer of an amnesty from the king (illustrated), it was left to the Earl of Warwick (who later became the Duke of Northumberland) to deal with the uprising. He easily routed the rebels at Dussindale, just outside Norwich, and the two Kett brothers were found guilty of treason and executed at the end of the year.

xxxxxThe enclosure movement, which began in the fourteenth century, had become widespread by the sixteenth, and the hardship it caused amongst the peasantry led to a series of revolts among the farming community. Over the next two centuries, many small-hold farmers were forced to leave the land and seek employment in the local towns and cities.