xxxxxAs we have seen (1113 H1), the Khmer empire began along the Mekong river sometime in the 6th century. Over the years its capital, Angkor, became a splendid city (noted for its magnificent temple of Angkor Wat), but in 1177 it was sacked by the Chams, a nearby enemy, and totally abandoned. It was at this time, however, that a new leader emerged, Jayavarman VII, one of the greatest of Khmer kings. In less than five years he had driven out the Chams and seized control. Crowned in 1181, he began a campaign which brought the empire to the zenith of its power, extending over much of modern Laos, the Malay peninsula, and Burma. Impressive, too, was his massive building programme, including the new capital of Angkor Thom. From this great city - a vast expanse of temples, palaces and shrines - stretched out a huge network of highways, linking all parts of the kingdom. But with his death, around 1215, the empire slowly began to disintegrate. As we shall see, after the capital was sacked by Thai armies, the capital was abandoned in 1434 (H6), and a new one established at Phnom Penh. Here the empire, much reduced in size, just managed to survive over the next two centuries. 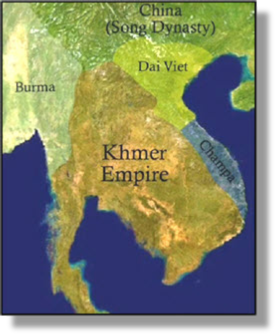 xxxxxAs we have seen (1113 H1), the Khmer Empire came into existence some time in the sixth century, the first settlements being sited along the Mekong River. In about 880 the Khmers established their capital at Angkor - situated north of Tonle Sap in what is now Kampuchea (Cambodia) in South East Asia. Over the years and a succession of rulers, Angkor became a city of magnificent shrines, royal palaces and temples, a showpiece of Hindu architecture culminating in the building of the magnificent temple of Angkor Wat. The Khmer rulers were regarded as Hindu gods - hence their massive temple tombs - and Angkor was their royal city. Around it they developed extensive irrigation works, used to supply a growing population with an abundant supply of rice.

xxxxxBut the Khmer were not without enemies, the most powerful of which were the Chams from central and southern Vietnam. Their constant incursions eventually turned into an invasion. They sacked Angkor in 1177 and all was virtually abandoned.

xxxxxBut all was not lost. It was at this juncture that Jayavarman, a powerful and energetic leader, led the struggle for independence. In less than five years he had driven out the Chams and established his authority throughout the Empire. Crowned King Jayavarman VII in 1181, he embarked upon a programme of expansion which brought the empire to the zenith of its power in both size and prestige. By the end of his reign in 1215, large areas of Laos, the Malay Peninsula and Burma were under his control. 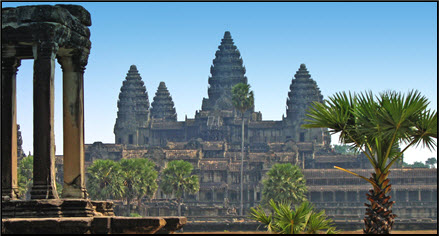 xxxxxBut perhaps even more remarkable than his Empire's territorial expansion was the massive building programme he achieved during the 30 or so years of his long reign. Apart from dozens of Buddhist temples, including the Bayon, a huge pyramid temple designed as his own mausoleum, he rebuilt the city of Angkor - renamed Angkor Thom (Great Angkor) - and restored and extended a vast network of highways which radiated out from the capital and, served by some one hundred rest houses, stretched out to the distant provinces beyond. In addition, this ambitious programme also included the provision of a hundred or so hospitals, built throughout the empire and dedicated to the Great Buddha of Healing. 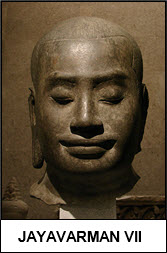 xxxxxThe quality of some of this building, particularly that of the temples, did not come up to the standard achieved in earlier times, but this is not surprising considering the extent of the building programme and the haste with which it was achieved. Whether Jayavarman was driven to undertake this huge project because he felt time was short - he was 61 when he became king - or because he was anxious to gain great merit in the cause of Buddhism, will never be known, but his achievement in this field, as well as his success on the battlefield, mark him out as the greatest of the Khmer kings, and one of the most able monarchs in history.

xxxxxWith the death of Jayavarman VII the Empire he had so successfully built during his reign slowly began to disintegrate. A succession of poor rulers enabled neighbours to invade the outer provinces, whilst the division within between Buddhism and Hinduism seriously weakened the powers of the central authority. By the fourteenth century the empire was a shadow of its former self and, as we shall see, came close to its end when Angkor Thom was abandoned in 1434 (H6) following another attack by Thai armies. The Khmers were forced to move their capital to Phnom Penh further south. Here, however, though much depleted in size and often depending upon the protection of stronger neighbours, the empire managed to survive over the next two centuries.