xxxxxAs we have seen, Ivan III, known as the Great, overthrew Mongol domination in 1480 (E4), and unified the Russian lands under Moscow control. His grandson, Ivan IV, took over control of the country in 1547 and, with the aid of advisors, overhauled the internal administration and the legal system, centralising the powers of government. At the same time he reorganised the army, limited the power of the princes and boyars, and embarked on a policy of expansion in the south. By 1556 he had conquered the Khanates of Kazan and Astrakhan, gaining control of the Volga and opening a trade route to the Caspian Sea. In the west, trade was opened with England following the visit of the English navigator Richard Chancellor. As we shall see, however (1565 L1), though he expanded his empire into Siberia, he was to fail in his attempt to gain a foothold on the Baltic, and his bouts of madness were to earn him the title of Ivan the Terrible in no uncertain terms. 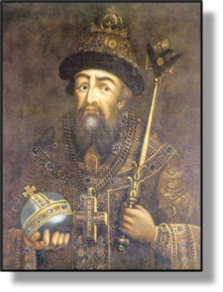 xxxxxAs we have seen it was Ivan III, deservedly known as Ivan the Great, who, coming to power in 1462, set about the task of unifying the lands of Russia under Moscow control. Having beaten off a number of attempts by the Golden Horde and overthrown Mongol rule in 1480 (E4), the way was clear for the making of a new and mighty nation. By the end of his reign in 1505 he had united much of the diverse territories that made up European Russia, and had managed to push the state's borders much further to the north.

xxxxxIvan IV came to power in 1533 at the age of three, the grandson of Ivan III and son of Basil III. He was a sickly child, prone to fits of violent temper, and suffering from an incurable bone disease. His mother took over the reins of government, but when she died in 1538 - allegedly poisoned - the country was torn apart by a vicious struggle for power among the "boyars", the Russian aristocrats. The conflict was resolved in 1547 when, at the age of 17, Ivan IV became the first Russian ruler to be formally crowned with the title of "Tsar and Grand Prince of all Russia". He then set about a comprehensive reform of the country's internal administration, both central and local, as well as launching a programme of expansion. To what extent these policies can be attributed to the young Ivan himself is debatable. It is almost certain that he would have leaned heavily upon his advisors, notably the archbishop of Moscow, Macarius.

xxxxxIn 1549 he established the Zemsky Sobor (Assembly of the Land), the first representative body to be created by a Russian ruler. Designed to act in an advisory capacity, it was mainly made up of representatives of the clergy, the boyars and the new class of landowners. And in the same year, work was begun on a complete overhaul of the Russian legal system, resulting in the issuing of a revised and more detailed law code in 1550. Then, having reorganised his army and improved conditions of service, he felt able to set out clear guidelines as to the duties and responsibilities of the aristocracy, thereby placing a limit on the powers of the hereditary princes and boyars. In the matter of government, he centralised authority, setting up a number of departments, each responsible for a particular state function. It is hardly surprising that Ivan IV is regarded today as one of the creators of modern Russia. 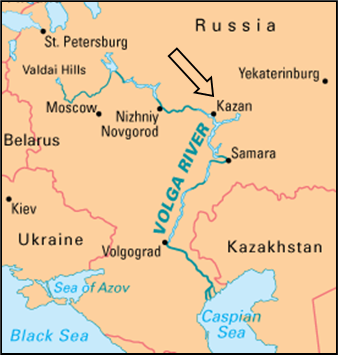 xxxxxMeanwhile, anxious to bring the region of the Volga Valley within his domain, an area where the Tatars remained a constant threat, attacks were launched on the Khanate of Kazan (arrowed on map). The first two campaigns were unsuccessful, but the third, carried out in 1552 and making better use of artillery and gunpowder, took the town by assault after a long siege. Four years later he achieved his aim when he annexed without a fight the Tatar Khanate of 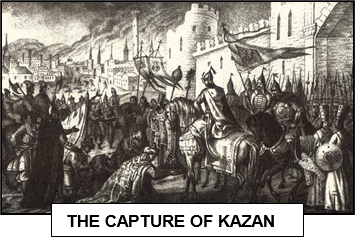 Astrakhan, situated at the mouth of the Volga River. The control of the Volga expanded Russia to the south, and secured the vital trade route to the Caspian Sea. Meanwhile, in the West, trade with England had been opened in 1554 following the expedition to Moscow of the English navigator Richard Chancellor, and his successful meeting with the Tsar.

xxxxxThough fully deserving of his nickname "Ivan the Terrible", his bouts of madness and wanton acts of brutality were not a major feature of his reign until after 1560. Also belonging to this later period, as we shall see (1565 L1), is his long and unsuccessful attempt to gain a foothold on the Baltic coast (the 25 year-long Livonian War), and his vast territorial expansion eastwards into the wastelands of Siberia.

xxxxxIvan IV had St. Basil Cathedral built in Red Square, Moscow, as a thanksgiving for his victories over the Khanates of Kazan and Astrakhan. It was first known as the "Church of the Intercession", but was later named after a Russian holy man who was buried in the vaults there at the end of the century. The building, complete with ten domes, conforms to no overall design, and is a mixture of colour. 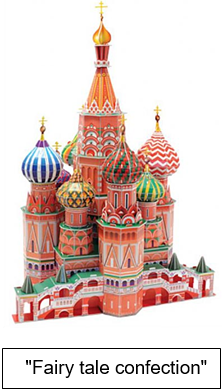 xxxxxIncidentally, as a thanksgiving offering for his victories over the Khanates of Kazan and Astrakhan, Ivan IV had the Pokrovsky Sobor church built in Red Square, Moscow - the name meaning "Church of the Intercession". Dedicated to the Virgin Mary, it later came to be known as the Cathedral of Saint Basil the Blessed, after a Russian holy man who was buried in the vaults there towards the end of the century. Saint Basil was said to be a somewhat odd character and so, in fact, is the church itself. It conforms to no recognised design. Its exterior walls are a confusion of different hues, and its ten domes all differ in shape and colour. Although Russian in design, legend has it that it was built by an Italian architect who was blinded so that he could never make two things alike! Another version is that he was made blind after the work was completed so that he could never recreate a similar masterpiece! Meanwhile the experts state that it is an interesting mixture of Byzantine and Asiatic cultural influences! It was completed in 1560.