xxxxxIt was Henry II who, given the task by the Pope to make Ireland more accountable to Rome, took the first steps on the long road to the English conquest of the island. In 1170 he sent out the Anglo-Norman Earl of Pembroke (nicknamed "Strongbow"), and by September 1171 he had brought the Irish to heel. In that same year, fearing that Pembroke might be carving out a kingdom of his own, Henry himself went to Ireland. He kept hold of the major towns, and had the Irish chieftains and the church submit to his authority. However, before the end of his reign, only Dublin and its surrounding area gave true allegiance to the English. Anglo-Norman lords held sway further inland, and the Celts remained in control in the far west. As we shall see, it was to be left to the Tudors, beginning in 1495 (H7) - over 300 years later - to try to succeed where the first of the Plantagenets had failed. 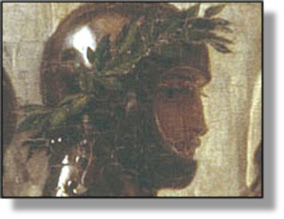 xxxxxIt was Henry II who, having been authorised by the Pope, Adrian IV, to conquer Ireland and make the church there more accountable to Rome, took the first steps on the long road to the English conquest of the island. In 1170 hexgave permission to the 2nd Earl of Pembroke, an adventurous Anglo-Norman lord, (nicknamed "Strongbow" and illustrated here), to invade Ireland. This he did, landing near Waterford on the south-east coast in August of that year. The Anglo-Norman conquest of Ireland had begun. There being little unity between the Irish chieftains, resistance to the invader was limited. Waterford was quickly taken, and Wexford and Dublin fell to the Normans shortly afterwards. Forxa short time, it is true, Pembroke and his forces were besieged in Dublin by the high king of Ireland, Roderick O'Connor, but in September 1171 the Normans broke out and routed the Irish king's army. 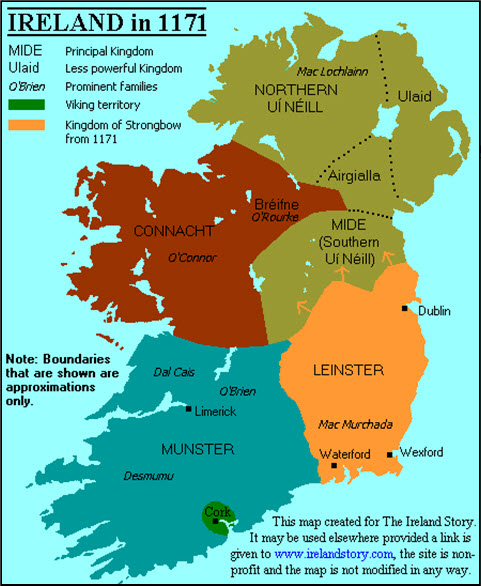 xxxxxIt was at this juncture, in 1171, that Henry II himself landed at Waterford. He was prepared to give some limited authority to Pembroke for what he had achieved, but he was anxious that Ireland should not become a rival Norman state. He had the Irish kings submit to his rule, kept the major towns in his own hands, and made the church recognise his supreme authority. Later,xby the Treaty of Windsor in 1175, the high king, Roderick O'Connor, accepted Henry as his lawful overlord. Thus by 1176 the majority of Irish chieftains had pledged allegiance to their English King.

xxxxxBut the Anglo-Norman conquest was not as complete as it would seem, and would become even less so as England turned its attention to continental affairs in the coming years. Even by the end of Henry's reign, it was only in Dublin and the surrounding areas that the English government exercised any real authority. Further inland the Anglo-Norman lords held sway, whilst in the far west Celtic rule remained intact. The English conquest of Ireland had been a failure. It was to be left to the Tudor monarchs, beginning in 1495 (H7), to take up the task begun but far from completed by the first of the Plantagenets in 1170 - well over 300 years earlier.

Strongbow: as depicted by the Irish artist Daniel MaclIse (1806-1870) in his painting of 1854, The Marriage of Strongbow and Aoife – National Gallery of Ireland, Dublin. Map (Ireland): by courtesy of www.irelandstory.com.