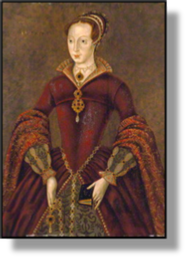 xxxxxThe young Lady Jane Grey, the great granddaughter of Henry VII, reluctantly became involved in a plot to prevent the succession of Mary I, a devout Roman Catholic, and lost her life as a result. The Duke of Northumberland, having persuaded the young Edward to nominate the Protestant Lady Jane Grey as his successor (thus putting aside the claims of his two half-sisters), forced the teenager into a marriage with his fourth son, Lord Guildford Dudley. 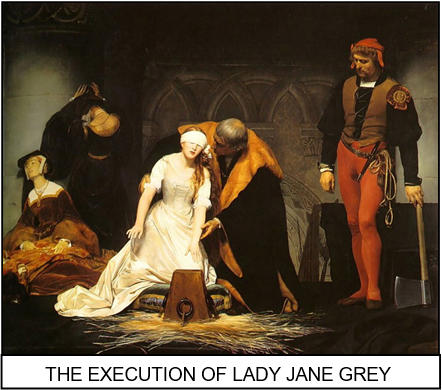 xxxxxWhen Edward died in July 1553, he then declared Jane Queen of England, and she reluctantly accepted the crown. She wore it for little more than a week. Mary, daughter of Henry VIII's first wife, Catherine of Aragon - considered by the people as the rightful heir - entered London in triumph and was proclaimed Queen nine days later. The heads then rolled. The Duke of Northumberland lost his in the August, and the unfortunate Jane and her husband, both accused of treason, lost theirs on Tower Green the following year.

xxxxxA beautiful and learned young lady, it would appear that she was an innocent victim in Northumberland's political plot, a plot designed not simply to ensure the succession of a Protestant to the throne, but also to keep the reins of government in his own hands, via his royal daughter-in-law. The painting is by the French artist Paul Delaroche.