xxxxxThe German physicist Gabriel Daniel Fahrenheit showed an interest in thermometers from an early age, and in 1714 constructed the first one to use mercury instead of alcohol. Within ten years he had greatly improved its accuracy and devised a temperature scale based upon it. This scale, which came to be known by his name, put freezing point at 32 degrees and boiling point at 212. As we shall see, another temperature scale was invented by the Swedish astronomer Anders Celsius in 1742 (G2). Fahrenheit also made an improved version of the meteorological hygrometer to measure water vapour in the air. 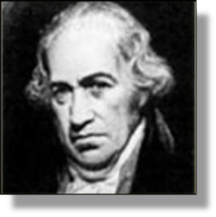 xxxxxThe German physicist Gabriel Daniel Fahrenheit was born in Danzig (now Gdansk in Poland), but he spent most of his working life in Holland making precision meteorological instruments. He learnt his trade in Amsterdam, beginning in 1701, and then spent some years travelling around Europe before making Holland his home.

xxxxxFrom an early stage, Fahrenheit showed a particular interest in the workings of the thermometer. Like the Danish astronomer Ole Romer, who had experimented with thermometers around the turn of the century, Fahrenheit first used a column of alcohol in his instruments, but came to the conclusion that mercury would be more efficient because its rate of expansion was more constant, and it was effective over a much wider temperature range. 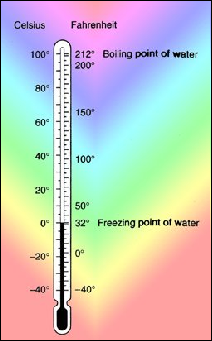 xxxxxIt was in 1714 that he constructed the first practical thermometer employing mercury instead of alcohol, and within ten years he had developed his prototype into a highly accurate instrument, and devised a temperature scale based upon it. After some adjustments to this scale - which came to be known by his name - he fixed the freezing point of water at 32 degrees and the boiling point at 212 - given standard atmospheric pressure. This Fahrenheit scale is still in use today. As we shall see, another temperature scale, the Celsius or Centigrade Scale, was invented by the Swedish astronomer Anders Celsius in 1742 (G2), and this scale is now the more widely used of the two.

xxxxxHis invention of the superior, mercury thermometer enabled him to determine the boiling point of liquids other than water, and to demonstrate that these varied with changes of atmospheric pressure. He was also responsible for a much improved version of the meteorological hygrometer, an instrument used to measure the humidity, or amount of water vapour, in the air.

xxxxxIncidentally, because of its size - some ten inches long -, and the fact that it could take up to five minutes to register a temperature, Fahrenheit’s thermometer was not appropriate for medical usage. In fact, it was not until 1866 that a smaller and improved version was developed for that specific purpose..……

xxxxx…… As noted earlier, Fahrenheit’s temperature scale was a modified version of the scale produced by Romer in 1701.